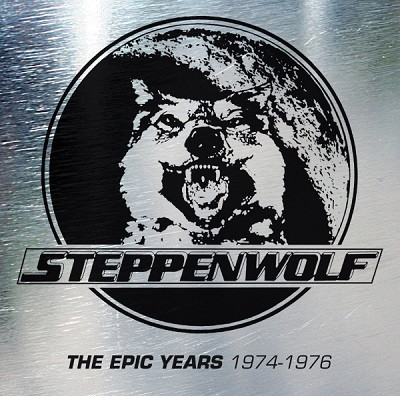 Continuing where The Dunhill / ABC Years box set had left off last year, the next story from Steppenwolf’s legacy continues in the mid-70s when they reformed and signed to Epic Records when they released three albums from the label (Slow Flux, Hour of the Wolf, and Skullduggery) from 1974 to 1976. The next box set from Esoteric Recordings gives us an insight by giving their time with Epic, the proper recognition it deserves.

On Valentine’s Day 1972, Steppenwolf was put to bed. It was the same day that the Mayor of Los Angeles’ own Sam Yorty officially designated as “Steppenwolf Day”. By this time John Kay embarked on a solo career and released two studio albums from the Dunhill label between ’72 and ’73; Forgotten Songs and Unsung Heroes, and My Sportin’ Life.

While his first solo album received well by most of the music critics, it didn’t do well. But on the second album, it sold less than his previous one. Then in 1974, Steppenwolf reformed with Kay, Edmonton, McJohn, followed by new members; bassist George Biondo, and Eddie Cochran’s nephew, Bobby on guitar. Slow Flux was their seventh studio album originally released in August 1974 on the short-lived CBS label, Mums Records.

Slow Flux was more of the harder styles from their first six albums during the late ‘60s, but still can pack a punch. From the Stax-like horn section turned gospel chorus and waltz-like approaches on the demise of Peter Fonda’s character in Easy Rider with ‘Justice Don’t Be Slow’, turned into celebrating midpoints as Nixon’s resigned as the president of the United States with positive cheers in the background, you can tell that there is still hope, but at what cost.

‘Get Into The Wind’ is a revving composition, channeling the styles of The Monkees ‘Last Train to Clarksville’ with blaring Organ sounds from McJohn as they return to their garage-rock roots while ‘Straight Shootin’ Woman’ and the Pete Townshend-sque flamenco turned orchestral beauty of the ‘Smokey Factory Blues’ goes from riding down the highway once more to remembering their loved ones and returning home from the heavy factories, but with a foot-stomping punch.

‘A Fool’s Fantasy’ is a semi-sequel to ‘Move Over’, but adding that Motown rocking vibe as if Traffic had teamed up with The Temptations and The Four Tops to make their own soulful-rocking-jazz approach compositions between The Low Spark of High-Heeled Boys and Shoot Out at the Fantasy Factory. By 1975, John sacked Goldy McJohn as Andy Chapin replaced Goldy on Keyboards with their unsung masterpiece, Hour of the Wolf.

When you hear a title like ‘Caroline (Are You Ready for the Outlaw World?)’ you think of the go-go dancers on the musical variety series of NBC’s Hullabaloo, being rebooted in the mid-70s in a parallel universe as it becomes the opening theme song for the show. You feel the ignition between Biondo and Chapin giving Kay a chance to blast off into space as the vibes of Black Oak Arkansas comes to mind.

Now this is where Steppenwolf tip their toes into the Prog-Rock pond by channeling their synthesisers by adding enough coal to their train engines as it chugs 500 miles per hour. From the pounding futuristic attack of betrayal, the man behind the mask, using their followers as a lie on ‘Someone Told a Lie’, to the corrupting man ruling with an iron fist of his own city, taxing the rich and poor into bankruptcy, and paying nod to the Strawbs’ Grave New World-era, singing in the styles of ‘Tomorrow’ with ‘Mr. Penny Pincher’.

John wants to let his listeners know that Steppenwolf are more than just a biker band, but taking different routes that is beyond the late ‘60s and into a various approach in the Epic years. Now we’re getting down to business with their ninth and final studio album. From the pounding machine gun fire by Edmonton as he sweats bullets for Cochran and Cook to get into battle for the ‘Skullduggery’ to occur, it does have a continuation of where ‘Who Needs You’ have left off, but riding into the unknown before getting down and dirty with some heavy blues rockin’ raunchiness with their take of Junior Walker’s ‘(I’m a) Road Runner’.

Then, they find their roots by crossing over between David Bowie’s Ziggy Stardust-era (‘Suffragette City’) and The Who By Numbers period with some pounding piano work, and a foot-stompin’ dance-hall brawl on ‘Life is a Gamble’. You can tell that Rosalie Cunningham was probably inspired by this song by coming full circle with Purson’s run coming to an end with their final single released in 2017, ‘Chocolate Money’.

As I’ve mentioned earlier, while the three albums during their run with Epic Records are often under the radar, it is time to give the box set the proper handshake it deserves. Each of the songs from Steppenwolf’s run in the mid-70s are worth exploring. And it is time to give John Kay his own throne and become the newborn king. And kicking a huge amount of ass like there’s no tomorrow!