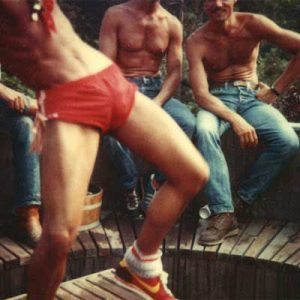 My French is pretty rubbish these days, but I think ‘La Chaleur’ translates as ‘Heat’.  Highly apt for a band who, when myself and two other E&D stalwarts were lucky enough to catch them live, were sweating so much one of them looked like he’d been thrown fully-clothed into a swimming pool by the end of their set.  Pretty impressive commitment-to-the-cause for a Tuesday night in North London, but it kind of tells you a lot of what you need to know about the energy and enthusiasm of Papaye.

Fans of the utterly discordant, be warned – there is proper groove here. Yes, the riffs and rhythms change with the kind of swift jerk-in-a-different-direction that you expect from math rock but each of those snippets is something you can really get a hold on and move to. This isn’t po-faced navel gazing, meant only to be enjoyed while nodding studiously under the weight of your backpack and stroking your chin – it’s for dancing to.  There’s less of the "tapping your foot along for a bit and then being a bit confused as to what to do after the segue" that you often get with Math.   There’s as much a pop aesthetic to the whole thing as there is Don Caballero style timings, and one thing that really comes across – both on the album and live – is Papaye’s sense of fun and enjoyment of the music they’re making. They’re a joy to listen to and a joy to watch.

A few tracks on the album shade over the two-and-a-half minute mark but other than that they’re short, snappy slices of bouncy, stompy, riff-strewn gorgeousness that leave you wanting more.  Very much looking forward to their next recorded offering and trip across the murky Channel to brighten up London’s stages.