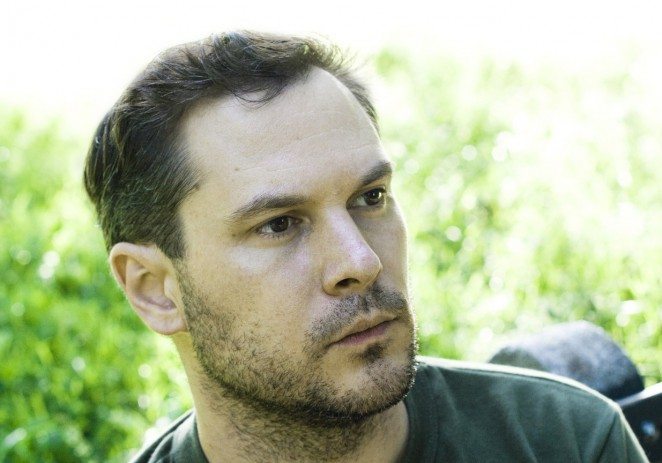 Having risen to prominence as the powerhouse drummer in Grails and OM, Emil Amos is about to release a solo album of reflective and dark Americana tinged songs under the name Holy Sons. Daniela Patrizi caught up with him to find out more.

(((o))): Just to get some background, can you tell us when you first began writing and playing music and who or what influenced you to do so?

Emil Amos: I was a borderline hyperactive kid and sang all day to keep my mind busy. I’d grind my teeth to make the sounds of drums in my head and sing looped melodies from Linda Ronstadt songs my mom would play in the car. Eventually she made me take piano lessons in 6th grade and in 7th I saw some kids playing ‘Wild Thing’ at the school talent show and immediately started playing drums the next day. Skateboarding got me into hardcore and I stopped paying attention to anything besides those two things around age 12. My dad gave me a four-track and I started recording local hardcore bands’ tapes and playing shows at the local teen center in Chapel Hill, NC. Then Merge Records started up and local bands like Polvo started informing my mind a little more about the world outside of our town to some degree.

EA:  In college I became obsessed with a massive two volume set of books that detailed Jung’s interpretations of Nietzsche’s ‘Thus Spake Zarathustra’. Jung’s basic ideas on Individuation and the Shadow gave me a new and much-improved way of looking at the mechanics of the world. I had a basement recording studio on campus and was taking LSD every week so all this subject matter kind of tumbled together into a lyrical style and a way of playing guitar that was sort of sitar-based. The LSD convinced me that you can unite with the true laws of the universe and besides that goal, everything else seemed irrelevant and obstructing the obvious point of life… which to me was to push ‘The evolution of consciousness’ forward.

(((o))): You are pretty famous as the drummer of two magnificent bands: Grails, that is definitely one of my favourite bands, and OM. You also release music with Lilacs & Champagne. What influenced the decision to release music through a solo project?

EA:  Holy Sons technically started around ’92 when I started recording solely alone, so it was the first ‘band’ of these 4 that I’m in now. Grails began almost a decade later and was technically more of a side project for all of its members until it really began to gain steam. I still grind my teeth, have racing thoughts and need something to submerge my anxieties into so I can’t imagine a time when Holy Sons won’t exist.

(((o))): Through Grails you release music with no words; in Holy Sons your voice is the instrument.  I often tend to see words as a sort of linguistic constraint on the music experience, trapping my mind in the conceptual prison of the message.  Other people claim the importance of voice in a song as its own instrument, with all the rhythm and intonation that the words add to the experience.  What do you think about that?

EA:  I generally think all instruments ultimately evolved from singing… and that the voice was the original instrument. Words can certainly get in the way if they are wasting the listener’s time (which is common), but they will always potentially offer the most sophisticated vehicle for describing our human situation.  So it’s a particular challenge to try and use words well… but it’s equally as challenging to write a great instrumental song too.

(((o))): What drives you to explore so many different sounds? Even within Grails and OM, it’s changed a lot over the years. Do you find you get bored?

EA:  Finding a unique vantage point is incredibly hard… And most ‘musicians’ are not necessarily ‘artists’.  The job of the kind of artist I generally imagine is to reflect and capture reality in its most raw sense, but to also expand our vocabulary and create new paradigms for viewing our situation. So just writing a ‘good riff’ is obviously not enough, but also making music merely for pleasure or sitting in a circle and playing old timely banjo songs can’t really begin to achieve the potentials that ‘ART’ could imply.  So maybe ‘being bored’ is an essential jumping off point… because once one is bored they have to reach for something that they themselves don’t yet fully understand to get excited.

(((o))): Lilacs & Champagne produced a video for ‘Everywhere, Everyone’, which appeared to be edited together from old VHS tapes, mostly 70s looking horror movies, and the cover of The Fact Facer and a lot of the art used in Lilacs and Champagne is highly reminiscent of those old horror movie posters in aesthetic. What draws you to this look?

EA:  Its more the theme of facing mortality and the Existentialist’s idea of suddenly realizing your existence in a moment of horror that I’m drawing from more than horror movies themselves.  But I’ve always been drawn to things that make me uncomfortable and imagery that’s loud and colourful like a painting of an Indian God that’s meant to intimidate you.

(((o))): Focusing on your solo project, where does the name Holy Sons come from?

EA:  In college my friend Duncan Trussell and I were obsessed with Secret Societies and occult knowledge. The name was just a side effect of that. It wasn’t that we necessarily believed that the ‘Masons’ had specific knowledge we needed… but we held that a kind of late night alchemical magic, within the realm of experimentation on the ‘Self’ and melting ourselves down with LSD, would help us re-build ourselves and point us towards our pure destiny. I was also really into the book ‘Narcissus and Goldmund’ because it had a very beautifully laid-out sense of how individuals have divine pre-destinies.

(((o))): Your new record, The Fact Facer, is going to be released in September. Can you tell us a bit about it? How long did it take to write and what was the theme or sound you wanted to convey?

EA:  In order to kick off this new era of the band, this record had to serve as a kind of summation of Holy Sons output. So it’s an equal combination of semi-synthetic, home-recording, sample-based constructions and studio-recorded folk music. I had to include songs from a few different periods and styles before we can really move on to the next chapter. Whereas the next record will probably be the most ‘hi-fi’ thing I’ve done.

(((o))): I read somewhere that the song ‘The Fact Facer’  was recorded about 10 years ago when you were in a sort of late-night ritualistic obsession with the samurai Toshir? Mifune.  Can you tell us a bit more about that?

EA :  I was fixated on the metaphor of the wandering samurai vs. the domesticated farmer featured in some of his old films at the time.  The basic idea was just that the samurai leaves home to explore himself and the world, testing the limits of everything he’d been taught, to eventually understand and appreciate life on his own terms. Whereas the farmer chooses safety, the pre-conceived notions of his community and to hide away from himself by avoiding self-evolution and the unknown.

(((o))): The  eleven tracks of The Fact Facer are quite different. They are all soft but their mood is different. There are both a dark vein but also a sense of hope. Is this a reflection of yourself?

EA:  I thought of it as a totally dark record at first but then the sequence became too redundant and the tension dissolved without more moments of melody and optimism interspersed.  I generally think art really only works on a greater level if it can integrate a sense of humour… so yeah I think the record tries to integrate more sides of life to reflect a more realistic picture of what actually goes on in our minds daily.

(((o))): I’ve already got more than one favourite song from your new album: ‘Doomed Myself’, ‘Selfish Thoughts’ and ‘Wax Gets in Your Eyes’ really impressed me. If you had to pick one song only from the new album which one would you choose? Why?

EA: I like the phrase “Wax Gets in Your Eyes” because I was imagining what happens when a mannequin cries… which seemed like a hilarious fantasy to watch robotic humans malfunction when they try to explore their feelings.

EA: We have a plan to come over there in February but I’ll probably be playing solo… which usually means a totally different list of songs I can choose from.

(((o))): Do you think there’s any chance of you taking Holy Sons on tour, perhaps supporting Grails like you did with Lilacs & Champagne?

EA: When we finally released the reissue of “My Only Warm Coals” (which felt like it was 20 years in the making), I felt a certain kind of weight lifted off me but also had to deal with a lot of submerged pain/confusion.  I guess I’d become sure I’d never get to that point in my career and that none of this music would ever be heard. So I broke down crying the day it was released in letting go of a lot of the bitterness and having to accept that I’d basically made it through the worst… but my life was also half done.

(((o))): Thanks for talking to us. Anything specific that you’re currently working on at the moment and would like to share?

EA:  I’m editing 4 more Holy Sons records and about to switch back to looking at new songs for Grails and Lilacs while Om goes back in the studio and then on tour again.