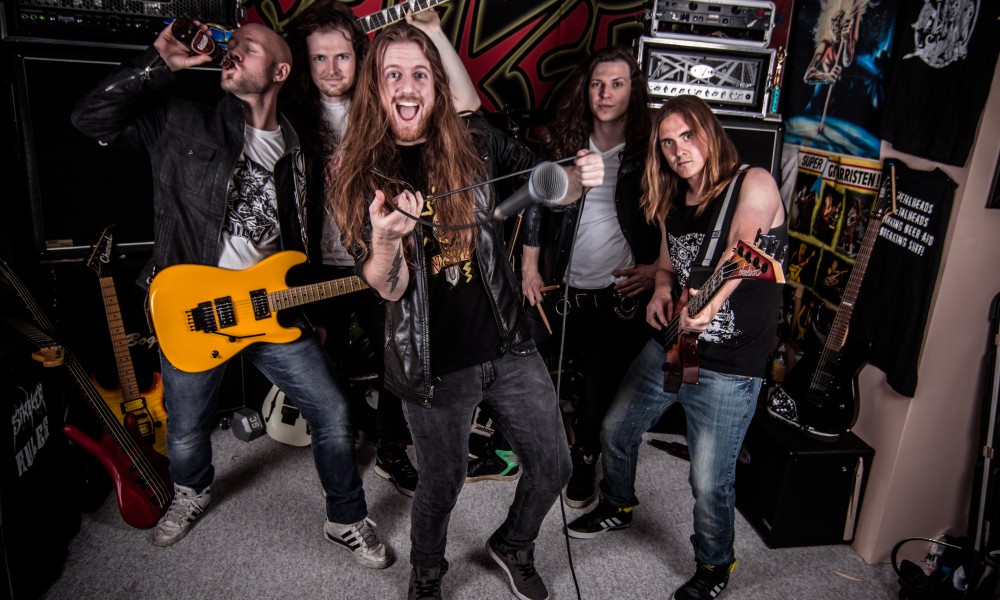 Straight off of their tour of Europe, Striker front-man/vocalist Dan Cleary was kind enough to take time out of his busy schedule to answer a few questions for Ech(((o)))es and Dust. Striker are riding high after the release of their second full length album City of Gold, which has received quite a bit of critical praise. The Canadian band, although going through some personnel changes, sits as one of Canada’s best “Good old fashioned heavy metal bands!”. Dan gives us his take on the new album, City of Gold, tour life, hanging with Metallica and of course hockey.

(((o))): Thanks for taking the time to do this interview I am sure it is a really busy time for you guys ending the European tour and trying to get back to home life. It has to be quite an exciting time for the band?

Dan: Yes! The tour was amazing. Great people, awesome fans. Best tour we have been on so far. We had a great time with the Bullet and Stallion guys, now it’s back to real life for a little bit.

(((o))): For those not familiar with the band, what should they expect from a Striker album?

(((o))): Armed to the Teeth seemed to have more of a fun party vibe to it and City of Gold seems to have a more serious side to it, is this a correct statement and if so what influenced the direction of the new album?

Dan: Yeah I would say that’s correct. We didn’t consciously go for less of a party vibe, I think it just turned out that way. When we are writing we never really have a goal in mind, for each song it usually only goes as far as “we should write a fast one”, haha. We did however want a louder, heavier production on this album. I’ve always thought if 1984 Metallica recorded today they would probably go for the biggest most balls out production you can get, so we probably should too, haha!

(((o))): City of Gold seems to be a more aggressive album than your past albums. Was this planned at the outset of writing and recording or was it something that just happened in the flow of things?

Dan: On this album more of our thrash influences seeped into the writing. Maybe because I’ve been listening to more Testament and less Ratt haha.

(((o))): City of Gold has been out for a while now, what has been the response as you have been playing some of the new songs live across Europe?

Dan: It’s been great, lots of people singing along to the new stuff, which is pretty cool. Everyone seems to like it, even though it is a bit different.

(((o))): Striker has been touring pretty steadily over the past few years especially in Europe and Canada, has being on the road become any easier? Are you true road warriors now or are you still learning how to cope with road life?

Dan: Well recently our band members have been dropping like flies so I don’t know haha. I love being on tour, it’s challenging for sure but it’s such an awesome experience every time. You learn to really appreciate a well-maintained washroom that’s for sure. You learn a few tips here and there, and test the limits of how many days in a row you can wear the same clothes.

(((o))): Striker was scheduled to embark on your first US tour as support for Artillery and Onslaught but it looks as though that is not happening. Can you give us any details on the situation?

Dan: Without going into great detail there was a lot of confusion about the tour, the tour was announced before settling on the conditions, which was ever changing up until the point where we were about to leave for Europe. It was all just business bullshit, the unfortunate side of the music business.

(((o))): I will tell you that I am personally disappointed as I was really looking forward to seeing you all live. Are there any plans in the works for a US tour in the near future?

Dan: Yeah it sucks man! We were super excited to do it, we have never been in the States and a lot of people are upset we couldn’t make it. We are looking to rebook something right away.

Dan: We get a lot of support from the Canadian scene. We are starting to become one of the older bands, which is weird. It’s been pretty cool, when we started out there wasn’t much going on in the way of classic heavy metal in Canada, we sort of came up with Skull Fist and Cauldron, and nowadays there’s all kinds of good stuff happening.

(((o))): I have read that a highlight for the band has been opening two nights as direct support to Metallica in your hometown. While I am absolutely sure that it was a great experience where you able to sit down with anyone from Metallica and pick their brains for any advice and if so can you share any of it with us?

Dan: Not exactly. We were able to have a conversation here and there with those guys, mostly just in passing. We mostly just shot the shit about whatever, talked to James about recording with Michael Wagener, which is a cool thing to have in common haha. Lars came over on the second show and showed us a review in the local paper and stuff. They were really cool guys, down to earth and willing to talk to us guys.

(((o))): And although I have seen the movie I must have missed your cameo in Metallica: Through the Never, since you are all movie stars now have you created your own IMDB (Internet Movie Data Base) page yet?

Dan: Haha here you go. Around 2:40, we are only in the behind the scenes. I need to really jump-start my acting career!

(((o))): Now, what might be the most important question of the interview: How do you see the National Hockey League season shaping up? Are we going to get see a Canadian team bring home Lord Stanley’s Cup?

Dan: I’m not sure, I know it won’t be The Oilers though. Buffalo will probably pull through and take it, haha!

(((o))): Thanks again to Striker for taking time out to answer my questions and be sure to pick up their new album City of Gold. You won’t be disappointed!