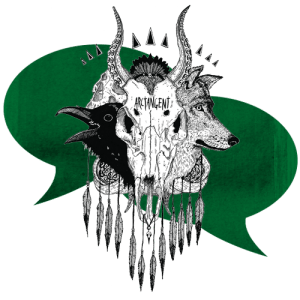 Polymath played the first ever ArcTanGent festival. Vasa have never played before. We found out what they had to say to each other.

Polymath – This is your first ATG show. Are you bringing anything special to the table to make it a show that will go down in ATG history?

Vasa – We’ll be bringing Scott to make a fool of himself again. Got to keep tradition going strong. In all seriousness, we’ll definitely be bringing a whole lot of energy to ATG. We’re incredibly excited to be a part of this festival so that excitement will probably translate to the usual ridiculous writhing body movements around the PX3 stage. We’re ready to show the festival goers what we’re all about and hopefully we’ll come away with a lot of new fans. I’ll probably bring down a few litres of Irn-Bru as well so I don’t get heroin like withdrawals.

Vasa – Will you be playing any brand new tracks at ATG this year?

Polymath – Yeah we will, but only one. We’re just recording our next EP; a sequel to ‘Reptiles’ so we thought we’d test something new. It’s a bit tricky because we’re playing some different instruments on the new stuff so there is a little change over time.

Polymath – Who are you most looking forward to seeing this year, any heroes or influences playing?

Vasa – Typical ATG, there’s loads of bands we want to see. We’ll be going to see a lot of bands we’ve played with and/or are friends with like Alpha Male Tea Party, Cleft, Lambhorn, 100 Onces, Alright the Captain, Black Peaks, Body Hound and you guys…maybe. There’s also bands like Quadrupede and IEPI that we’re excited to see. Plus, there’s Dillinger and Deafheaven to look forward to. We played with Deafheaven in late 2013 and it was the most intense live show we’ve ever witnessed so we’re looking forward to seeing them again.
Vasa – You guys are scheduled to play on the Bixler tent this year. Are you at all nervous about playing on such a big stage to what will surely be a pretty large crowd?

Polymath – We actually played this slot at the first every ATG festival 2 years ago, it was one of the most fun and most awesome shows we’d ever played…and it was about our 3rd gig at the time. We’re really chuffed to be back and just really looking forward to making this the biggest show we’ve ever played. Seriously, we’re looking into pyrotechnics!

Polymath – Do you have a back up plan if everything breaks whilst you’re playing?

Vasa – Don’t say that. Honestly, I think we’re kind of used to stuff misbehaving on stage that we can usually get to the bottom of it and fix it and get back to business in a short space of time. But still, don’t say that. The fear will be there all festival.

Vasa – Who is the one band who you wouldn’t dare to miss at this years festival and why?

Polymath (Tim) – Deerhoof, one of my favourite ever bands.
Polymath (Chrispy) – Axes, because I missed them last year
Polymath (Joe) – Rolo Tomassi, they were amazing the first year, and their new album is unbelievable

Polymath – Which of you do you consider to be the most talented?

Vasa – He’ll be incredible smug about this but I’d say Blaine. Biggest showoff incidentally is definitely me.

Vasa – Who do you think possesses the most ridiculous bass faces. Joe (Poly-Math) or John (Vasa)?

Polymath (Tim) – Joe. John doesn’t qualify as a bass player because he has too many strings.
Polymath (Chrispy) – John because his are not bass faces, it’s just his face.

Polymath – With Gay marriage now being legalised across all America which member of your band would each of you marry?

Vasa – We pretty much all agreed it’d be Blaine simply because he’s the most feminine, well-kept and hygienic amongst us. Not to say we’re all unhygienic he’s just borderline OCD with it.

Vasa – Who out of your band mates could you throw under a bus without a moments hesitation?

Polymath (Tim) – Joe. No hesitation.
Polymath (Chrispy) – Joe because our band sound would not lose out one single bit. He’s only there for the faces.
Polymath (Joe) – It’s common for lesser musicians to be jealous, especially of a front man such as myself. Chrispy, your timing is so bad you’d probably throw me behind the bus and Tim is so stupid he’d probably throw himself under by accident.