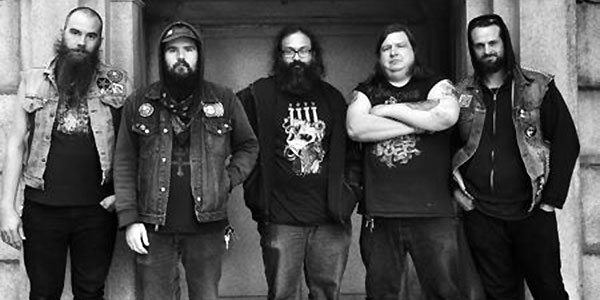 Washington DC/Baltimore’s ILSA are one of the filthiest-sounding bands currently going. Their murky blend of crust, sludge and death metal is the perfect blend of all the nastiest parts of each genre, and makes for a pretty potent combination. With the release of their latest depraved masterpiece, The Felon’s Claw, Ross Mckendrick ventured forth some questions to vocalist Orion.

(((o))): Obviously lots of metal bands play with ‘dark’ or ‘evil’ imagery, but you guys manage to conjure up true horror; addiction, mankind’s capability for harm, as well as the obligatory odes to Satan. What was the inspiration behind the songs on The Felon’s Claw?

Orion: Pain. Seems to be the connection between all the albums. We don’t write with an end result, just to get something out, deal with an idea or melody that is later woven together and processed collectively. I don’t really like to write or create, it’s always a nagging I can’t satisfy or deal with otherwise. Once I start on a song, or really any piece of work, it’s an obsession that I can’t shake until it’s complete. I’d imagine the motivation is similar with most the band.

(((o))): The track ’25 Cromwell’ on the new record is a reference to Fred & Rose West, two of the most depraved serial murderers Britain has ever seen. Seeing as those murders happened pretty geographically distant from you, and decades in the past by now, what led you to write a song about them specifically, as opposed to more ‘local’ cases?

Orion: I watched a documentary about the Wests and was amazed at their ability to completely conceal their horrible activities from not only the authorities, but their own family. It’s similar to the way John Wayne Gacy was able to operate, preying on runaways and hustlers, while rising to prominence in local politics enough to be photographed with a First Lady. His wife and children (similar to the West’s) had no clue of his true self. In the documentary, one of the family members of the West’s victims discusses her desire to see the body of her murdered kin. To look upon a pile of skull and bone in order to make that final closure. It’s an interesting aspect of how we mourn.

Even the word ‘autopsy’ translates from Latin to “the act of seeing with one’s own eyes”. It’s also not coincidentally the name of a Kenneth Branagh film we’ve projected in past performances.

(((o))): I haven’t had my copy of the record delivered yet, but I’m stoked to see the full packaging. I get more of a vintage ’80s metal vibe from the cover art than the horror imagery of previous albums, it reminds me of something Midnight would have, what inspired the artwork? Does it tie in with any specific lyric or song from the album?

Orion: We ripped it off Dio’s greatest hits record. Joshy’s always wanted to do a pop-up gatefold, and the idea suited it perfectly. I originally wanted a weird gimp dude, but I love the Hyena/Cerberus. It also lent itself to the album title, a “tell” in handwriting that indicates criminality or antisocial tendencies.

(((o))): Previously you’ve had songs heavily inspired by specific horror flicks, like ‘Martyrs’ from previous Intoxicantations, are there any such out-and-out tributes to terror on the new record?

Orion: Yeah man! ‘Enter the Void’ is named after the most recent Gaspar Noé film. We love all his movies, and look upon him as a true master. I Stand Alone is an all-time favorite of mine. I worked for years at a video store and we had a bootleg copy we used to rent and sell. The owners of the store actually got an email from Noé thanking them for helping with American distribution, something he was struggling to achieve at that point. Of course Irréversible also stands in my mind as a one of the greatest cinematic deceptions of the horror of sexual assault.

Aside from that, all the lyrics from ‘Katabsis’ are all totally lifted from Hellraiser 2. Word for word.

(((o))): With those types of movies obviously being such a noticeable influence on the band, have you seen any recent horrors that have impressed you?

Orion: Sure, a lot has been direct to video/Netflix, but I’ve been digging The Taking of Deborah Logan, Starry Eyes, Only Lovers Left Alive, Would You Rather, It Follows, You’re Next, Deliver Us From Evil, Frankenstein’s Army, uhh I could probably go on a while. It’s dark times, and lucky for us, good fodder for the horror genre!

(((o))): You’ve also previously covered traditional folk songs such as ‘Foreign Lander’ and ‘The Roving Blade’, but as far as I can see The Felon’s Claw is comprised of entirely original songs. Are there any nods to traditional songs in there I might’ve missed?

Orion: ‘Pandolpho’, by Albert Parsons. A beautiful song that’s haunted me since I first heard it. I have an LP of Elizabethian and Jacobian music by a counter-tenor named Alfred Deller. The song was written by Albert Parsons in the 1500’s as an aria in one of his plays. If you haven’t heard the voice of a counter-tenor, I would advise searching it out. Blissful, yet so mournful. The 80’s singer Klaus Nomi was a counter-tenor if that provides any reference. My mother had the self-titled Nomi tape when I was a kid, and his ability to manipulate his voice to such extremes combined with his gothic-space aesthetic, really weirded me out.

The lyrics of ‘Pandolpho’ lend themselves to interpretation through their melancholy and sadness. “My medicine is my misery, and bale is all my bliss!” – how could we not steal that?!

(((o))): As well as taking inspiration from horror movies and folk songs, you’ve also paid tribute to your metal influences, covering Bolt Thrower’s ‘The IVth Crusade’ on the split 7″ with Seven Sisters Of Sleep. Do you have any plans for more killer splits, or more covers?

Orion: We’ve always struggled with covers, comically enough, so probably not for a while aside from the interpretations of old ballads we’ve always included. We have a split with the Japanese lords of death Coffins set for later this year, as well as another down the road with the creeps in Greta!

(((o))): You guys haven’t really toured much further than DC or Maryland, so I guess it would be wishful thinking that you’d have plans to come to the UK and Europe anytime soon, right?

Orion: Its always seems at the tips of our fingers, but everyone in the band has no money or real flexibility in their jobs. We’ve never set out to make a profit or turn our music into a career, but I really think that’s a big part of what’s allowed us to remain active for so long. Between our first band Time of the Wolf, some of us having been playing together for 10 years now.

Of course, we’re always open to opportunities, and should we get the offer, I know we’d all be stoked to tour overseas. I have most my family in France, so I’d be very excited to be able to visit while on tour at some point.

(((o))): Any bands you’d love to play with if you were offered the chance? I’d kill to see you guys come over here with Acid Witch, or do some dates with Hooded Menace or something.

Orion: We did a split a couple years back and toured a few days with Hooded Menace. It was a dream come true! We’ve been aching to play more with Primitive Man from Colorado. We did a benefit in DC with them a couple weeks ago, and will be playing with them next week in Baltimore. I think most of us would kill to play or tour with New Zealand’s Meth Drinker.

If we’re talking ANY band, probably Bolt Thrower (duh) or Amebix (duh) or maybe Sacrilege since they’re getting back together.. This is the hardest question! Cianide?

Orion: Thanks dude, don’t hurt yourself with it.