We sat down with the guys from Talons a few hours prior to them taking to the main stage at ArcTangent. Unfortunately, we weren’t able to tell which of the six of them were which on the tape so you’ll just have to imagine them as some kind of six headed Talons monster.

Yeah, we played the first one on the Thursday on Yohkai. It was a great crowd, I remember.

That’s why we were excited about today, like hopefully a decent crowd today, being on the Arc stage will be pretty fun. 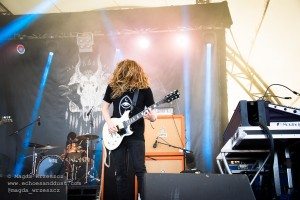 (((o))): (D) That’s one thing, talking to the bands around here, is that most people play to maybe 100 people outside of this and then you come here and it’s, like, suddenly you’ve got 2000 people in a tent. How is that?

It’s really good for smaller bands to be able to do that. It’s just like a weekend where you get to feel like you’re a bit of a bigger band than you are, really. Like there’s not many festivals that would let us play the main stage.

It’s like a concentration of people who you know are actually here for the music, because so often people come to a gig and they don’t really like that genre or they don’t really know what’s going on. Or they’re just here to get pissed.

Not knocking that but…

(((o))): (Hannah) 65Days said something interesting. They said that often when they’re prepping for a festival they’re kind of trying to win people over in the first few songs because you’ve got such a short set and there’s so much other stuff on and you’re not playing what people are expecting and they actually said they prepped for Arctangent as a 65Days gig rather than as a normal festival slot because they know that they’ve got the audience.

That’s cool. They know they don’t have to win people over.

That’s one thing I like about this festival, yeah, is that it’s got a very strong idea of what it wants to put on. Like, you know you can trust them. It’s good.

When we put together this set, we played a song we haven’t played live before that we usually wouldn’t play because it wouldn’t fit in our normal set but here we can have a bit of freedom to do something a bit different. People are a bit more ready to be onboard with stuff like that. 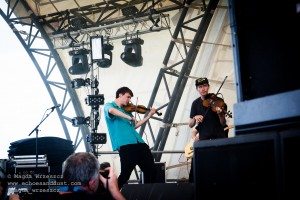 (((o))): (D) You don’t feel you’re going to lose the crowd if you try something different?

Yeah and if you’re playing on a stage with good sound and you can’t hear people just chatting, the fruit machine going off in the back, at a quiet, earnest moment in the track it’s amazing.

(((o))): (H) I mean that’s quite an interesting thing. I’m in a post-rockish band myself and we’ve played a couple of gigs to kind of five or ten people and you’re going all out and you’re playing really, really hard and then you get to the end of the song and there’s just a round of polite applause. It feels kind of weird, doesn’t it?

You hit the last note and you’re like…waiting for this thunderous applause that never comes.
But here you get that. Here you get that and definitely these kind of bands feed off that when it’s kind of, emotional

(((o))): (D) Yeah, something that’s noticeable when you go round the site watching the bands, is that so many of them are so obviously having the time of their lives.

We’ve got a little break because one of us is moving to Amsterdam.

But we are still doing gigs. We’ve just got to coordinate things a bit better. 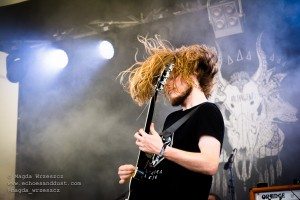 It’s kind of the opposite, actually – I think we’re kind of doing gigs when we can but knowing the logistics it’s harder these days because we’re all working or have other commitments, and we don’t all live in the same city any more, there’s one in Hereford, there’s a couple in Manchester, couple in London. We’re quite used to it being difficult. We’ve dealt with it for a few years.

So we’re thinking writing might be appropriate as well. We do it pretty much all online. The first album we all lived in Hereford, but for the last one we were recording snippets and ideas and sharing them online.

When we used to practice together, we’d write something in the practice, whereas what we found this time round was that we’d write bits and send an idea to someone, someone would send it back with something else recorded over the top and it was much more collaborative and then the time we did have together to actually make them into songs, we’d focus on writing rather than messing around half the time, so. It worked really well so we’re planning on doing that coming up to writing new stuff.

I think it’s for us, it feels a lot more successful way of writing anyway, because if someone works something up as a coherent idea for a song and it’s not just about for the song it’s about what we want to achieve musically. Musically for the album and how it would fit in with our lives.

(((o))): (D) Do you set out with an objective of kind of what you want to sound like or does it kind of just develop?

It’s a combination of thinking which way we want to go but we’re probably not too sure so we kind of feel it out. Like, before the last album we made a couple of songs which we probably think are a bit atrocious but at the time, because you’ve got to keep your confidence up, you’re like “Yeah, this is good” but in the end that’s part of getting to where you want to go. You scrap stuff, it’s fine.

And also I think it changes, the first album we very much – a bit like what you were saying about 65Days, when you’re trying to play a few songs to grab people’s attention – our first album, to us was a bit like that. We just wanted to make something a bit bold and brash and we played everything so fast and so rushed and so, you know, you take things out. We still play a couple of those songs in our set but we definitely changed the sound a little bit in the second album.

And probably we’re gonna aim to do that a little bit more on the third album. We don’t really know what direction yet but we’ve all got ideas of things which we’d like to achieve some day.

I think also artistically we always try to go out to just emulate something else, like other bands, and then we never…you never achieve that but in trying to copy something else you are just inherently discovering your own selves.

I think with that, though, it’s never like we try and think “Oo, let’s emulate that”, it’s more like we like this aspect of this music… very few of us, I think, listen to post-rock that much genre music outside the band. 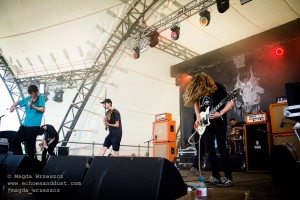 We’re all in post-rock bands but we hate post-rock. Well, not hate it but you know. But I think that makes for a much more interesting melange of influences.

So I think we take aspects of what inspires us and then turn it into something hopefully a bit more original. Well, to us anyway. We have such a scatter gun approach to sorts of references and songs that I think it really creates something that we…well…aren’t sure of beforehand.

With the new album, we were taking references from architecture and quite visual things and trying to think more about concepts. I mean there’s always that side when you’re writing a track and you think about what bands you like but then also about when someone listens to it, where might they be listening to it. Or how do you want them to feel, rather than how do you want it to sound. Emotion’s a big part of it.

For the next stuff I reckon we should maybe focus on the sort of mood we want to create rather than the sound.

I think that for us it comes across much more on the second album, because the first album was very much more of a math rock and kind of weird time changes whereas the newer album was less about playing complex guitar parts or drum beats – I mean, there was still that in there but it was more about the feeling you get from listening to it.

(((o))): (H) I mean, I don’t know if it’s the same for you guys but with my band our first album was just a recording of everything we’d written up until that point whereas the second album was written as an album and I think that made a big difference to us.

Well, we had a technically first album of all the stuff we did before the first album, which was kind of a way to get rid of all that stuff. We put it on a compilation CD and then it’s gone. So The first album was very much a fresh start. We definitely wrote it as an album, we were writing it as an album not as just a collection of songs.

And with that they had to head of to get ready for their set, which was an absolute belter and momentarily distracted us all from the puring rain!