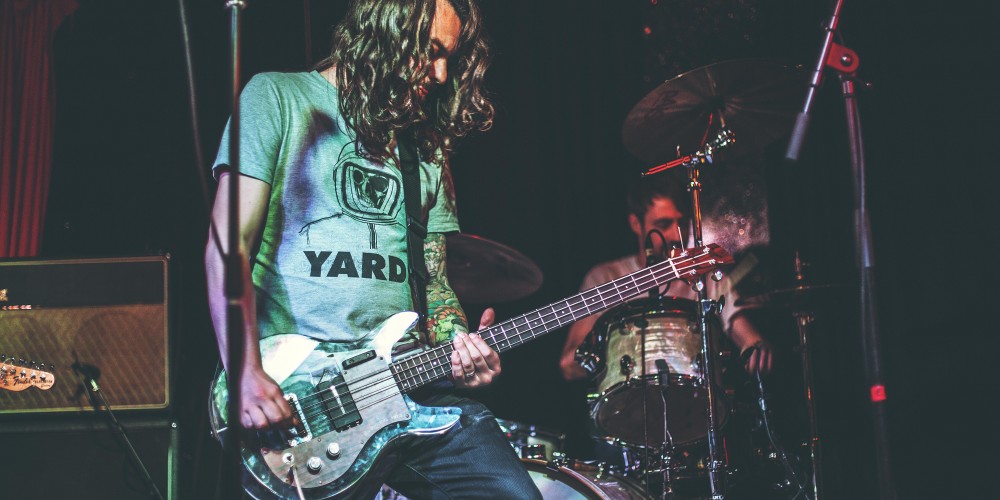 In this edition, Rich chats to Wayne Adams, the man behind Bear Bites Horse Studios and can also be found rocking out in Shitwife, Death Pedals and Ladyscraper. Basically, he’s a DIY legend… here’s what he had to say!

CC: I believe you went full time with Bear Bites Horse Studio this year… that must feel fucking awesome?

WA: Yeah man, feels great – took a bit of balls to make the leap, but I have an awesome wife (I’m the Shitwife in our relationship) who has been mega supportive! Also there is so many amazing bands in London at the moment, so there is never a dull day!

CC: How does it work? Do you record anyone who books you or are you fussy?

WA: The busier I get the more picky I find myself – I try and work with bands that have a good mind set and a similar approach to music as I do – it’s not about genre, but more about bands that want to have fun recording, but also know what they want and understand the music they make.

CC: Which BBH recordings have stood out this year?

WA: Man it’s been a big year – will list a few of the top of my head- certain I will forget a few of my favs, but there has been so much good stuff!
Luminous Bodies was the first thing I worked on this year, what a beast! USA Nails came back in and did there 2nd album – it’s such a mean sounding record.

I worked with a stoner doom band called Strauss on their first EP, really awesome riffing on that one. Ligaments, great punk EP. Mister Lizard – not sure this has been released yet – 7 tracks of grind craziness in 5 mins.

Currently I’m working on the new Palehorse, Art of Burning Water, Nitkowski and Theo – all massive!

CC: Any you feel didn’t get the recognition they deserve?

WA: I feel as though, although there is a bit of attention on the London music scene at the mo, it frustrates me that there isn’t more in the main stream press – so many great bands here at the moment, playing super real music! So yeah all of them!

CC: It’s been a crazy year for Shitwife, a kabillion gigs and that incredible record. Have you got bigger than you thought considering the name and setup?

WA: Haha, yeah it’s been a real fun ride this year, I think when we started jamming we knew it had potential, but the name was too good to not use. The way the dance scene has embraced us alongside the DIY scene has been awesome, as we get to play so many varied gigs – Everyone has so much fun at the shows makes me really happy! I think that most people get the name and see it as a positive fun thing as well

WA: Yeah it’s recorded, I just need to finish mixing it! I keep getting distracted by all the other awesome bands I get to work with and then want to mix it again to make it better!

WA: Bangface weekender with Shitwife was incredible, but think our album launch topped it, was so overwhelmed by the turn out!