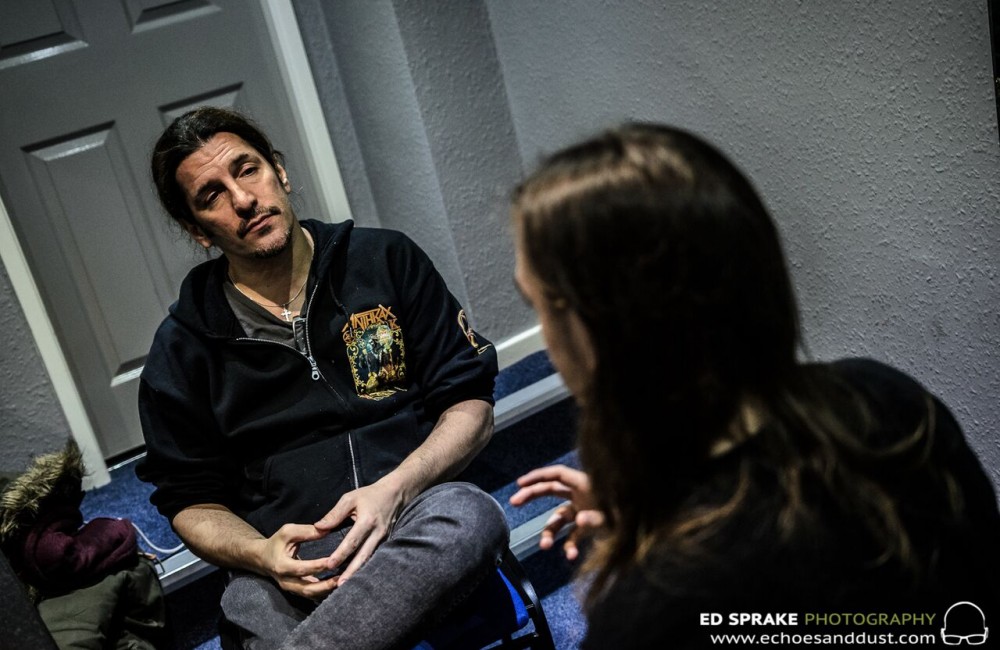 “If you need to go, you ask to pull over. That’s old code from over the years. If you really need to go, if it’s really an emergency, then you shit in a bag.”

This is how my conversation with Frank Bello, bassist for pioneering thrash metal band Anthrax, begins. Tucked away in a small dressing room set adjacent to an even smaller toilet in the upper reaches of Manchester’s O2 Apollo, Frank guides me through the procedure for taking a number two on a moving tour bus, which involves stretching a plastic bag over the toilet seat before taking care of one’s business. The irony of starting an interview as such isn’t lost upon Frank, who slowly and good-naturedly chuckles before making himself comfortable.

Far removed from the ball of energy usually inhabited during the band’s performances, this evening’s Frank Bello is calm and relaxed. With hair tied back, the Italian-American reveals himself an eloquent and thoughtful interviewee. Confident when asked, yet never with any hint of arrogance, Frank answers with his mouth, but talks with his hands. We chat about Anthrax’s career past and present, their imminent next album, For All Kings, and the band’s current UK tour with fellow Big Four members, Slayer. 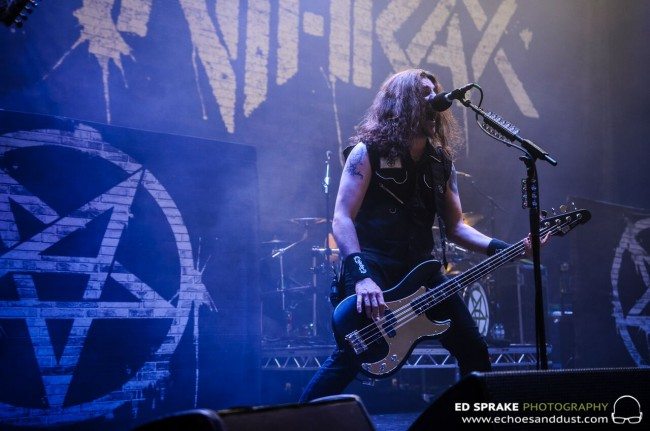 I start by asking Frank whether he felt an added layer of pressure during the recording process for the new album, For All Kings. After all, this will be Anthrax’s first in nearly five years, and the successor to 2011’s critically-acclaimed Worship Music. However, Frank explains that it wasn’t something he struggled with; “Other bands put that pressure on themselves. I just really believe in this music; I believe that you only put your name to music that you really feel.” He answers excitedly, with a genuine appreciation for simply being able to still do what he does for a living. “What we’re doing here is rebuilding a fanbase. I look out into the crowd and see fans who are 12, and those who are 50. It’s amazing.” Of course, the most significant difference this time around is the inclusion of guitarist Jon Donais, who replaced long-standing lead-guitarist Rob Caggiano back in 2013. “[Jon’s] a blast to hang out with; he’s a blast to have in the band”, Frank enthuses. “He’s always been great. He was great in Shadows Fall. I’m a fan, and as a fan, I can’t wait for other fans, especially other guitar players, to hear his work on this record.”

In the predominantly white, male-dominated world of heavy metal, Anthrax have always been revered for their progressive, socially conscious attitude. I ask if Frank still believes that his band can make a difference? Interestingly, he seems slightly taken aback by the question, although goes on to explain that the band’s aim has never been to incite change, but merely to illustrate their own beliefs. “We don’t wanna preach to anybody. If fans don’t agree, then that’s fine. It’s more a case of ‘This is what we believe’. If you don’t, then that’s fine. But… and I don’t wanna sound like a head… but peace and love is just best, isn’t it?” On this note, I reference the song ‘Evil Twin’, scheduled for inclusion on For All Kings. Reportedly written in response to this year’s attack upon French satirical magazine Charlie Hebdo and similar acts of terrorism, Frank remarks that although written prior to the recent Paris shootings, the song’s lyrics have unfortunately become even more pertinent. “Scott [Ian, Anthrax guitarist] wrote the lyrics to that song, and all I can say is that I agree with every word.”

Our conversation turns to other, less tragic, influences upon the album’s recording. “Geezer Butler still excites the hell outta me”, Frank beams. “Even on the last [Black Sabbath] album, 13, there were moments when I was like ‘What did he do there?!’, and I’ll ask him when I see him.” Frank goes on to cite Geddy Lee of Rush as ever-influential on his own style; “I like bassists that make me think”, and jokes about pestering Iron Maiden’s Steve Harris for tips; “I’m sure he’s sick of me now! [laughs]”. 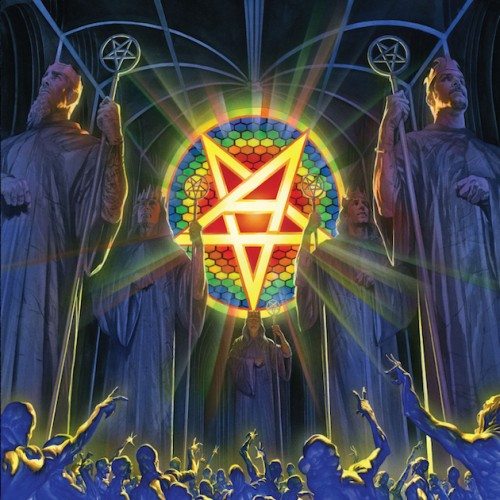 For All Kings artwork

We talk about the artwork for the upcoming album as illustrated by renowned comic book artist and painter, Alex Ross. Frank tells me that the album cover, depicting the five band members as monumental stone figures cast within a cathedral, stood before a glowing stained glass mural and towering above a grasping crowd, was in fact the brainchild of Charlie Benante. “I grew up with Charlie in the same house, and he’s genuinely the most amazing artist I’ve ever seen. Even when he’s just scribbling, it’s incredible. He has so many ideas”, Frank gushes. “Everyone in the band has their own thing; Charlie’s is the artwork so knew we had that covered. I’m really excited for people to see it!”

I steer conversation to focus on Anthrax’s current tour with fellow thrash stalwarts Slayer. Both bands have recently recorded new music (Slayer’s Repentless was released this past September), but what was the impetus for the two bands to tour together once again? Frank answers simply; “We’re all friends”. Although it undoubtedly helps that both bands currently use the same UK booking agent, Frank explains that the bond goes far deeper; “We’ve grown up together. I mean, after our show tonight, we’ll shower, then eat some dinner, then watch some Slayer until they finish. Then they’ll shower, and we’ll go to Slayer’s dressing room and get loaded…[laughs]. On our days off, we hang out. There’s never a day when no one sees anyone else.”

For UK fans, the most notable previous pairing of the two bands will most likely have been in 2011, when Anthrax and Slayer joined Megadeth and Metallica to bring their Big Four world tour to Knebworth, but did Anthrax experience a markedly renewed sense of interest in the band around that time? “Yeah!” Frank’s eyes light up, he moves to the edge of his seat. “That’s what started this all for us! And Metallica didn’t have to do that. Metallica are… big. It was their idea, and you can’t criticise Metallica, because they didn’t have to do that.” Given that Frank referred earlier in our conversation to rebuilding a fanbase, presumably that tour afforded his band an unprecedented level of exposure? Frank nods; “Definitely. We played to brand new audiences. Not just Anthrax, but Slayer, and Megadeth. We were playing fucking arenas… and they were sold out!” 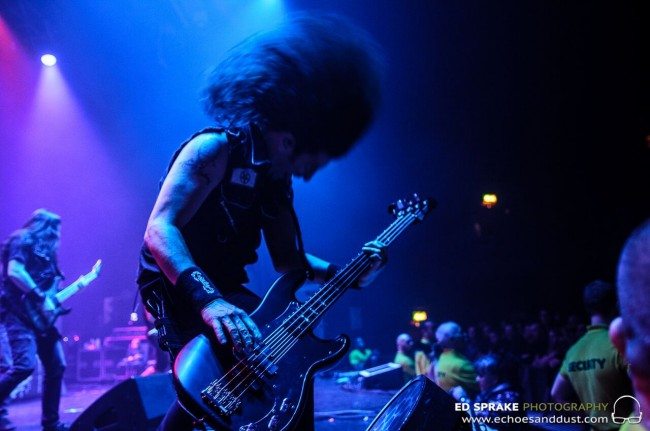 The 2010/11 Big Four world tour marked the first time that the founding fathers of thrash had toured together on the same bill, cultivating a line-up that fans had been aching for since the 1980s. For any band to have remained consistently active for over 30 years is no mean feat, but I’m keen to know how Frank and his bandmates retain a balance between giving the crowd what they want to hear, whilst at the same time keeping things fresh and inspired for themselves. “It’s hard. It’s really hard, but I honestly feel as though the crowd’s energy makes [the older songs] feel new every time we play. We definitely try to mix it up, because technology makes it hard. People see a set on the internet from the night before, and then they’re like ‘Hey! You played this song last night…!’ People are paying money, and okay, they’ve got a right to hear those songs, but we definitely try to mix it up. Sometimes it’s fun to start with ‘Caught In A Mosh’.”

There’s a knock on the door. It’s Frank’s two-minute warning before Anthrax’s soundcheck ahead of their performance tonight. As Frank seems in no hurry to escape, I offer one last question; how does touring differ now when compared to the earlier days of the band? He seems suddenly wistful. “It’s very different. I mean, I have a son, and a wife, and we’re touring for seven fucking weeks in Europe.” Frank reels off his band’s schedule for the next few months; after the current dates with Slayer, Anthrax will tour America with Lamb Of God throughout January and February, before supporting Iron Maiden on the South American leg of their The Book Of Souls world tour in March, after which the band will then return to Europe for a spate of summer festival appearances. It’s a heavy schedule in more ways than one. Frank slaps the table and points to my mobile phone, “It’s this that makes it easier though; this technology is great! The other night after the show, instead of going out and getting loaded, I stayed in my room and spoke to my wife on FaceTime… for two hours! I was there; I was in my living room, and I could be a dad and ask my son how school went.” Frank recalls how he complained about the English rain to his wife; it was at this point that she held her own phone up to the window, allowing him to see that it was raining just as much back at home. 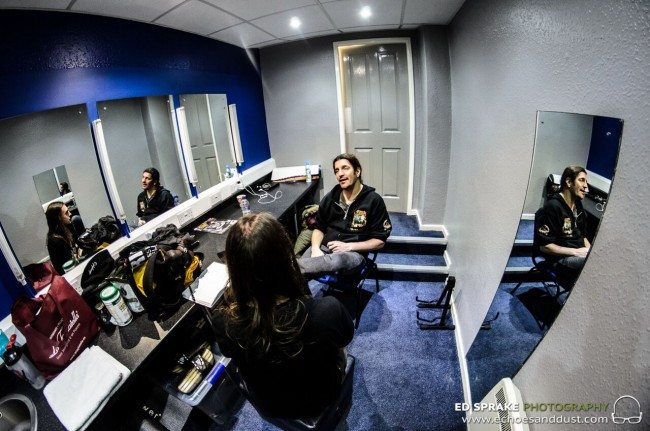 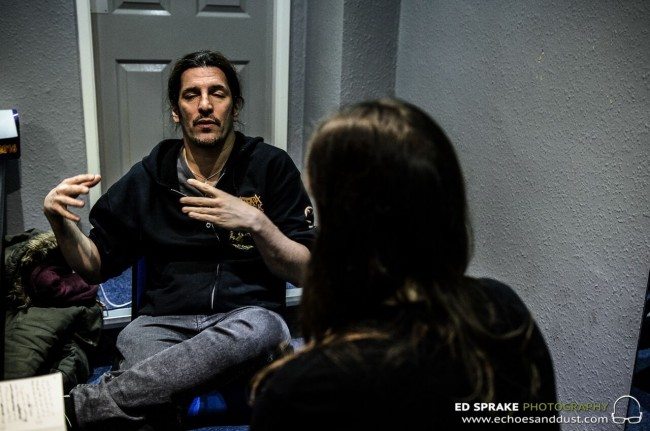 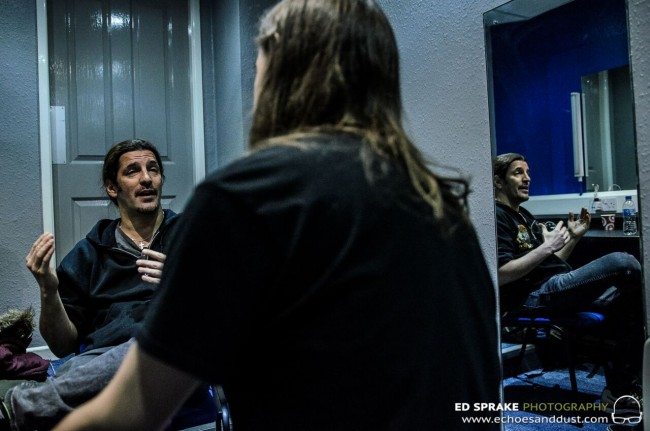