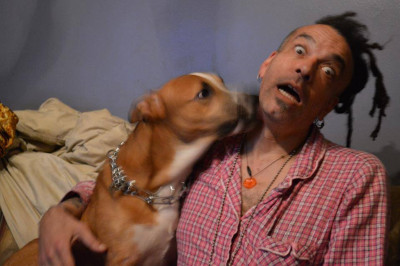 A succession of Bowie, Iggy Pop and Roxy Music. Seeing them and The Tubes and the Rocky Horror Picture Show all happened in about two years, and my whole world was turned upside down.

A couple of months ago the legendary former Faith No More and Bad Brains singer Chuck Mosley was in the UK for a long stretch of acoustic gigs. Steve Fallows caught up with Chuck when they played in Manchester to have a chat about the tour, influences and American politics.

(((o))): First of all, thanks for the chance of this interview. This tour is called ‘Re – introduce yourself’. A lot of people know you from the earlier part of your career, would you like to bring us up to speed.

Chuck: We got this manager, we met him online, and he put out our record through his label with Pete and Dave Ellefson from Megadeth. He and Doug got together, Doug has been trying to get me to go on tour for ages and do some acoustic stuff, but I’m always too afraid to do it. They got together and ganged up on me and made me do this and finally I said OK and he came up with the title, and yeah…I get it…it’s cool

(((o))): It seems like a massive undertaking, not many artists come over to the UK and play so many shows.

Chuck: Really? I couldn’t come and not do that many shows. It wouldn’t make sense to me. It was originally going to be about two weeks long and then some shows in Europe, but they were taking longer to book. Meanwhile, more and more places in the UK were asking for it, even on the plane some shows were being added, so it turned into 29 shows in 30 days or whatever. It’s all been good too, maybe a couple of shows that haven’t been full, but its all been a lot of fun. I’ve been pleasantly surprised and very appreciative of it all.

(((o))): You appeared again with Faith No More this year as part of their anniversary shows. How did that come about?

Chuck: That was for the re-release of the first album for its anniversary. It would have been bigger, but they couldn’t get Jim to do it, so they decided on just two shows with me doing my acoustic shows and then joining them for a few songs. They announced it two days before and they sold out both shows in San Francisco and Los Angeles, which was kind of cool.

(((o))): You have been part of two massively influential bands in Faith No More and Bad Brains. Who was it that first influenced you?

Chuck: David Bowie. I grew up playing classical piano from like three years old through till I was about fourteen or fifteen. When I was twelve, I heard ‘Hang Onto Yourself’ when I was going to my lesson and that day I changed to guitar. Basically, he changed my world. A succession of Bowie, Iggy Pop and Roxy Music. Seeing them and The Tubes and the Rocky Horror Picture Show all happened in about two years, and my whole world was turned upside down. I grew up in Hollywood in the sixties and seventies, that shit was all out there. Then you had the Jackson 5, then came weed, Zeppelin, Back Sabbath and all that, but yeah, mainly Bowie.

(((o))): Your career has been quite a rollercoaster with huge success and some crushing lows. What kept you motivated?

Chuck: I should be rich by now, but I guess I’m always going to be a blue collar working class musician. Everything just takes forever to get going, shit happens. We tried to go out with VUA, but that was a big fiasco. I don’t want to go into all of that, but the first big show we were playing with Bam Margera and the drummer walked offstage midway through the third song of the night and that made everything crash. I didn’t want to cancel the tour so I finished it on a greyhound, and every night I would teach the support band a couple of tracks so they could accompany me, then I’d play a few solo, so I still put a show on. The main problem then was I spent my family’s money paying the other bands and travel expenses. We played New York and they didn’t honour our guarantees so by the time we got back from there, everything was just fucked up. I didn’t see a way out and didn’t want to ask friends. Someone suggested asking fans for donations and putting a few songs online and I really didn’t want to do it at that point. I mulled it over for a couple of weeks and thought “I can’t do that, I can’t announce to the world that I’m fucking broke and ask people I don’t know to help me”. But I did it in the end and the response was overwhelming, it was really moving. I didn’t know what to say. I has to say stop after just a few days, because I got what I needed and didn’t feel right taking any more than I need to pay the rent and keep my family off the streets. I started feeling guilty about it. My life has always been up and down, so I have always had something to deal with and that has driven me on to accomplish what I set out to do. Just carried on battling through it.

Chuck: Well, after here we go home. I’ve got this band Primitive Race that want me to sing on their album (a conglomeration of Prong and Type O Negative). They asked me to sing on two songs, then five, and now it’s the whole album so I’m going to do what I can, but it’s a pretty tight schedule. Once that’s done, then VUA are recording, so we are going to get together as we are all busy, but we will do something, then I have an acoustic EP to do. If I get al of those things done by Spring 2017, then I will be back over here by myself getting to some places we didn’t hit this time round. Then we go down to the Southern States, the Eastern Seaboard and then South America. That’s the next year or two sorted, it’s a world tour it could fucking take forever, who knows. Once the guarantees allow, I will be taking VUA out on the road. I’m moving over, my girlfriend is here, and I also have a drummer here, so I only need to bring two guys over for that to happen.

(((o))): You managed to get out of the country at a time when there is chaos brewing in the US election.

Chuck: That’s why I’m moving here. Trump is an idiot, don’t believe the hype. Hilary is not as bad as everyone makes her out to be. She is just a politician like of all of them, so she’s a bitch, but our best hope right now. She’s no more or less crooked than any of them, including her husband, who was a good fucking president. Obama’s good, but he ain’t really done much. He’s got this whole Russia thing to deal with, he really should have put a lid on that before it got to this stage, not with a hammer or nothing, but he could have worked something out, he’s a smart guy. But that situation with Trump, could be trouble.

(((o))): Does any of the modern political scene influence your writing any more?

Chuck: Nah, I grew out of that when I was 21. I mean people aren’t going to change. They are always going to be stupid. We have the potential to do so much, and end up doing so little, so my shit’s always much more personal. You can shout about whatever you want, but people don’t listen and people don’t change, they just fuck things up even more. The whole thing is a joke to me, my parents were very political, and I was for a while, but nothing changes. When has anything ever changed. The only good thing is that we’ve had nukes for what…sixty years now, and we haven’t used them. That’s the greatest human achievement right now that amazes me. They should be gotten rid of, we have them, but we haven’t used them…yet. That could change with Trump, so if we are all going to die I want to do it in the rolling hills and green countryside of the UK. I don’t want to see Cleveland as I’m getting blown up.