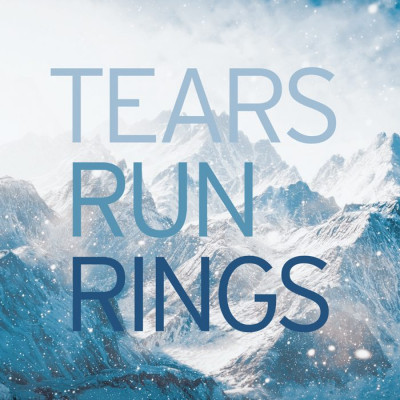 In Surges by Tears Run Rings

Where once upon a time a band’s personnel suddenly divided by hundreds of miles would almost certainly have spelt the end, these days in the digital age it is merely a tad inconvenient. Tears Run Rings, a group of five friends originally from Southern California, have, since 2007, released 2 albums and an EP, despite now finding themselves dispersed in Portland, San Francisco and Los Angeles. Their ability to record individual parts for a record, in their local studios, and then send and share with the other band members online, for them in turn to record their contributions, has proved successful thus far. 2010’s Distance, their previous record, was a glorious, technicolour blur of quintessential shoegaze, which actually remembered to write songs as well as bury itself in cascading shards of effects-laden guitar.

In Surges, the band’s third long-player, now emerges, some 6 years later, and I guess it is clear from the title why the album was a long time in the making. Continuing a theme which began with their debut album Always, Sometimes, Seldom, Never in 2008, the LP is book-ended by 2 pieces of gorgeous, ambient swell that we will call the ‘Happiness’ tracks. Well, actually, they call them the ‘Happiness’ tracks too. Although there must be some concern over the whereabouts of ‘Happiness 5’, as 1-4 on the first 2 albums are preceded by opener ‘6’ here. No matter, it sets the tone really nicely, before ‘Belly Up’ chugs into life with mid-paced percussion and a prominent, reasonably post punk bassline. The guitars, as you would expect, are soaked in delay and rich of reverb, and swell satisfyingly into a lovely, goose-bump inducing chorus.

A feature of Tears Run Rings’ music that sets them apart in the right away from a lot of their contemporaries is the strength and clarity of the vocals. Guitarist Matthew Bice has a soothing, velveteen quality to his voice, which could easily be mistaken for Neil Halstead of Slowdive at times, and it contrasts deliciously with the celestial style of bassist Laura Watling, with whom he shares lead vocal duties. This means, that unlike a lot of shoegaze and dream pop bands, they are unafraid to place their vocals lot higher in the mix. It gives the tracks a couple of extra dimensions, especially on the beautiful, becalmed ‘Broken’ and the sparkling, swirling guitar pop of ‘Part of the Glass’.

Sonically, the bands of reference would certainly include Slowdive, along with Hammock (in their more up-tempo mode), Airiel and German outfit Malory. They inhabit the dreamier end of the shoegaze spectrum, for sure, but, like their aforementioned sound-alikes, this ethereal quality is achieved from within a largely classical rock framework, and Tears Run Rings are therefore able to retain depth and an important degree of weight in their music.

Having said that, the band do drop the pace more often here than on previous albums, and I think the record could certainly have benefited with a little more momentum in its latter stages, with the slightly ponderous ‘Sine Wave Sleep’ and closing, droning experimentation of ‘Happiness 7’ meaning the album drifts towards a conclusion, rather than gliding to its end.

There is enough about In Surges to mark it out as one of 2016’s better releases in the shoegaze genre, because put simply Tears Run Rings are entirely true to its original form. No, there is nothing ground-breaking here, but where a lot of bands might smother song and vocals in an effects-laden racket in order to disguise the fact that there isn’t much of either, Tears Run Rings use their pedals to enhance a collection of well-written songs, which are sung beautifully.