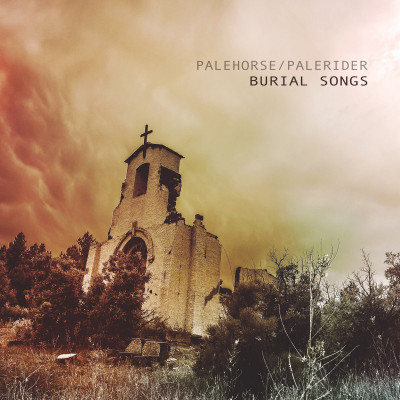 In July 2015, Australian post rockers We Lost The Sea released their third album. More than any release in any other genre since, the cathartic depth and sheer magnitude of this record absolutely floored me. The album is called Departure Songs, was written about with jaw-dropping brilliance on these here pages (and not by me, I hasten to add), and the five tracks that make up the album are accompanied with individual pieces of artwork, each designed as scene and mood setters for the listener.

Now here we are, twenty months later, and out of seemingly nowhere come Denver based three piece Palehorse/Palerider, who tag themselves most strikingly as Doomgaze (I was sold already before I had even heard a note). Here comes the curious bit. Their debut album is entitled Burial Songs, is similarly absolutely fucking phenomenal, and they too have provided companion art for each of the four tracks on show. And it is obviously to be written about with the same stunning ingenuity and refinement on these very pages.

So what can we learn from this mysterious, four-part symbiosis? Firstly, that by the end of this universally positive review it will only be a three-part symbiosis. Also, that perhaps if you want to deliver a record capable of stopping a significant number of Echoes And Dust crew members in their tracks, then simply write songs about death and dying and name your album after them, and provide some associated visual imagery with the tracks therein.

All bizarre comparisons aside, Brandon Richier (Vocals, Guitar), David Atkinson (Bass) and Nate Marcy (Drums) have produced an outstanding debut record. To sound so poised, so captivating, utterly mesmerising, often, with their first recorded output, is nothing short of astonishing. As soon as Burial Songs begins, with bleak, simmering sitar and death march percussion, you are locked into Palehorse/Palerider’s doom-laden groove, and for the next 40 minutes you are taken to all of the right places at all of the right times.

A thunderous, fuzz-laden bassline moves the opening ‘Sundowning’ into mid-paced gear, before the most perfectly pitched, reverb-soaked guitar chimes elegantly into view, and immediately the track becomes the quintessential essence of doomgaze. We’re a minute in, by the way.

The band name-check Earth, Slowdive, Sleep, Chelsea Wolfe, True Widow and My Bloody Valentine in their biography and press release. Yes, I can hear elements of each of those bands in their sound, but the sum of those and other parts transcends the sludge and the slowgaze into something far more celestial, sublime. I am reminded, more than once, of the spirituality of Fields of the Nephilim, the visceral intensity of The God Machine, and the brooding darkness of Swedish post metal outfit A Swarm of the Sun.

The gorgeous chords descend for a time into gloomier territory, before ‘Sundowning’ roars forward with majestic power and bewitching, intertwining melodies- in equal measure. When Brandon’s vocals eventually arrive, at around the four minute mark, the final piece of this wonderful sonic jigsaw is in place. The standard bellowed/screamed vocals of a lot of Doom records has no place in music this sophisticated, and the perfect balance between ferocity and grace is expertly maintained by an effortless, heavily effected voice.

‘Tamám Shud’, a Persian word meaning ‘end’ or ‘finished’, and made famous by the mysterious death of a still unidentified man in South Australia in 1948, who had the words torn from a book in his trouser pocket, begins in contemplative mood, with a becalmed, minimal bassline wandering in and out of those already distinctive and delectable chords, and a distant, slightly unsettling flickering, like a large moth in a lampshade. Suddenly, the mother and father of bass effects takes hold, and provides the oh-so satisfying head-spinning backdrop to a dark and sinister opening, including a more prominent, and again brilliantly effective vocal. Holy shit, then great torrents of guitar distortion rain down on our heads and in our hearts, in black sheets of utter desolation. This is spectacular, towering, beautiful music.

I need a lie down. No time. ‘Into The Abyss’ has arrived, and is immediately surrounding us in a sonic haze of ethereal splendour, soaring vocals and a taut, foreboding tension. The swirling, pedal ravaged guitar and cascading bass certainly make this track the one with the floppiest fringe and most interesting shoes, but with the same melancholic and metallic allure as before, which means Palehorse/Palerider will never sit comfortably alongside most contemporary shoegaze bands, which tend to be a cheerful bunch, for the most part. The ‘Doomgaze’ distinction is entirely valid, and wholly accurate, as I have already confirmed.

Palehorse/Palerider trot triumphantly out of town with ‘Nero’, this one visually accompanied by a picture of the Tijeras cemetery in Colorado. It is distinct from the other three tracks on show as it dispenses almost entirely with graceful elements of instrumentation. It sounds utterly distorted and devastated as a result, in the best way possible, and yet returns ultimately to a single, wandering guitar and thoroughly composed outro, to complete a dazzling, exhausting journey.

Burial Songs is, quite simply, one of the most stunning and original albums I have heard for quite some time, and if I hear something better this year I will be surprised and delighted. If you are looking for something darker, more evocative, incredibly powerful, supremely elegant and a spine-tingling epic, all at the same time, then waste no further time looking. Buy this record.