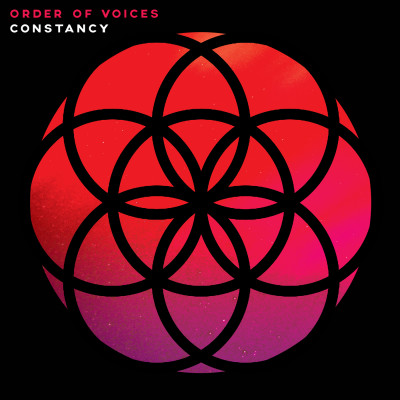 Constancy by Order Of Voices

The blueprint for Order Of Voices’ music is to take a less is more approach.  To put it simply, they create short and sweet songs with a ton of emotion, warmth, and talent that use up every second of each composition with purpose.  While this can be a daunting task for many groups, it’s not lost on these relative newcomers on their second album Constancy (with their debut self-titled album coming out in 2010).

The art of songwriting is a major thing to process when listening to this music, as the group writes every song with the intention of not letting any note, chorus or vocal be infused into the music without some meaning when related to the overall composition.  And over the course of the ten songs contained within this album, they display this directive with careful precision.

‘Hand In Hand’ starts the album off with a solid acoustic opening amid strong vocals, which leads to a great up-tempo hard rock edge.  The vibe of the song is that of a short teaser to lead to bigger things from the rest of the album.  Elements of King’s X jump out at me from the bottom-heavy drive of ‘Long For Air’, which is mixed with a great melodic atmosphere.  The band gets a little more persistent near the end of the song with the push of the riffs and the little bit of harshness in singer Leigh Oates delivery.

‘Raise A Glass’ starts off with beautiful acoustic chords that mix with the pitch-perfect vocals of Oates.  The song slowly builds into a chorus of vocals with a marching snare drum beat, then back to the subtlety of the opening of the song.  I love how this song breathes, but my one complaint is that I wish the song would fully take off instead of staying low-key.  I almost keep waiting for the instruments to pick up and take me to the next level, but it doesn’t happen.  Showing how the band can change their sound up while staying interesting, ‘Diametric’ shows a quickened pace after the last track with some punchy riffs and a commanding bass and drum accompaniment, while ‘Speak Aloud’ gives the listener a very laid-back and sullen guitar pattern with distant vocals that help add to the melancholic atmosphere of the track.

‘Affirmation’ features interesting time signatures at the start of the song until a commanding chorus pushes into standard time with a different beat while being just as dominant as the former riffs.  The song slows down eventually to show that masterful yin/yang approach that the group takes with the hard and soft aspects of their sound. ‘Shatterproof’ shows all the instruments working together wonderfully to give a determined and buckled-down performance, with Oates vocals never sounding as varied and talented as here.

The album closes off with ‘Sever This’, which is a jangled melodic trade off of all instruments that propel the vocals from soft and refined to forceful and dominant once the pace ramps up.  As great as this song is at finishing off the album, I can only imagine how epic it would be live for the band to close off a monumental set.

With Order Of Voices, you won’t get a band that will go over-the-top with their sound and take a ton of chances, but what you will get is a mature and refined prog-rock take on today’s music scene.  The songs all hover in the four to six minute range and don’t suffer from over indulgence, which can be a problem with prog in general.  The band do a great job of on one track giving us a hard-edged and dominant approach to their sound, and then on the next track they pull back all the layers and get somber with some beautiful atmosphere.  It’s hard for a lot of bands to play both sides of that musical fence, but these guys do it seamlessly.  For a band that is only two albums in to their careers, they craft songs like seasoned professionals.

This is a release which you’ll either be on board with it right away and appreciate all the little nuances of their sound, or you won’t get it right away and will need to fully immerse yourself into their music with repeated listens to draw out all of their songwriting talent.  For myself, even after enjoying it thoroughly on first listen, repetition gave me even more of an appreciation for their expansive musical tendencies.

With a seven year gap between Constancy and their debut, you’d think that before listening to the new product that the band would lose a lot of steam in their downtime, but this album proves to be the complete opposite as the group has built masterfully on their origins and have fully forged ahead with memorable follow-up material.  My big hope for this quintet is that they abandon this lengthy gap for album number three as this much talent needs to be more active and productive for how well they develop music.