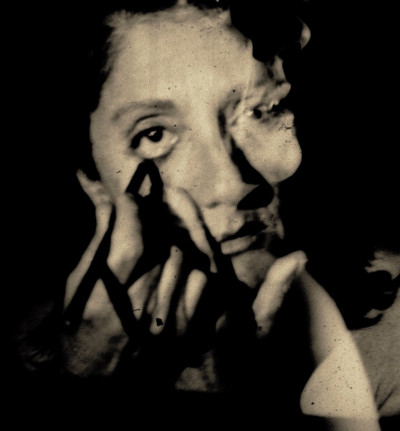 Ghost Pains by The Death Of Money

Regular readers of my reviews (yeah, right, who am I kidding?) will notice that I tend to favour conventionally heavy music – metal, hardcore and post-metal are usually my bailiwick. Every so often it’s good to challenge yourself to listen to something new though, so I thought I’d give Ghost Pains a go, and inadvertently stumbled onto a completely different type of heavy – and don’t let the lack of crunching riffs, screams and blastbeats fool you, The Death Of Money have crafted one of the heaviest releases of the year. Ghost Pains is crafted from the same kind of shoegaze, ‘post’ driven ambience that Jesu is cut from, but with an even greater capacity for restraint. It is an emotionally driven experience; it ranks as one of the bleakest records I’ve heard in a long time.

The Death Of Money (recently re-named from The Death Of Her Money) have been around for over 10 years, releasing two full lengths and a handful of EPs prior to their name-change earlier this year. Shamefully, I’ve been completely unaware of their presence; since taking on this review I’ve been back and downloaded their back catalogue (free from their Bandcamp, see the link above) and have been able to track their evolution from a post-metal / noise band that relied on the use of slow but crushing riffs and volume to pummel the listener into submission to the more delicate and developed approach that is demonstrated on Ghost Pains, which ultimately leads to the same endpoint.

‘New Son’ opens the record with a repeated refrain, built upon with layers of piano and faintly new wave sounding guitar, before the addition of some distorted Neurosis style yelling low in the mix, before the main riff drops in behind the refrain and a haunting melodic vocal takes the forefront for the chorus. Percussion is used sparingly, and this contributes to the central contradiction that Ghost Pains presents throughout its running time – that of open space that allows the song structures to breathe, but also an overbearing sense of oppression for the listener. ‘Wherever You Are’ is one of the more ‘conventionally heavy’ songs on the record and drifts closely to Jesu territory, albeit with a far more organic delivery to the percussion, which humanises the song wonderfully; there’s no hint of shouting here, with the haunting, reverb soaked vocal taking the lead, and some lovely keyboard adding a lush but icy layer to the second half of the song. ‘Outside Emptiness’ perfectly reflects the sparse, bleak beauty of its title, featuring a wonderful guitar riff over the chorus, mirroring and accentuating the vocal line. The smooth, lush production really opens up the sound, it gives the guitars some grit, but not so much that they overpower, another demonstration of the restraint that is prevalent throughout the record from top to bottom; there are no big riffs, no big dynamic shifts, just growth and progression, and a knack for letting the almost poppy vocal hooks breathe and take the lead. When I say ‘poppy’ I mean Joy Division pop, by the way, not Miley Cyrus pop, just to be clear…

Jarboe adds her not inconsiderable vocal talents to ‘Running Through Dreams’, adding an ethereal quality to an already floating song, the only issue with this is that at two and a half minutes, it is way too short and feels a bit under-developed. Similarly, ‘Coda’ feels like it could have done with a little more time in the writing room before heading into the studio, feeling a little insubstantial in its content, even if specific sections – such as the lovely distorted solo line that starts over the mid-section – are note-worthy.

‘Hospital Bed’ is almost percussion free, relying on a simple repeating phrase on a reverb soaked guitar and a hypnotic, repeated vocal pattern. It elicits an emotional response, but also acts as a refined palette cleanser after the more bombastic songs that precede it. The title track follows and is probably the strongest track on the album, playing with more textures and almost channelling a Type O Negative vibe in places. Subtle keyboard lines and an extended build up to a final section that feels almost uplifting leads to a nice change in tone; this is achieved by cleverly layering sounds to create something warm and quite lovely. ‘Trust The Outsiders’ is a brilliant piece of wilful songwriting – holding a build and riff for ages, and then refusing to give the listener any kind of payoff; it is frustrating in all the right ways and a perfect way to end the album.

Ghost Pains is a challenging record. It blends post-rock, doom and shoegaze perfectly, albeit emphasising the shoegaze element. It has an emotionality to it that is affecting to the listener, and it’s a record that has stayed with me and some of the refrains have literally kept me awake at night. I’ve come back to it time and time again over the last few weeks; partly because some of those ambient vocal lines are hidden earworms, but mostly because it is just a damn good record. If shoegaze and doom are your thing, this is definitely a record to check out; I’m a convert.