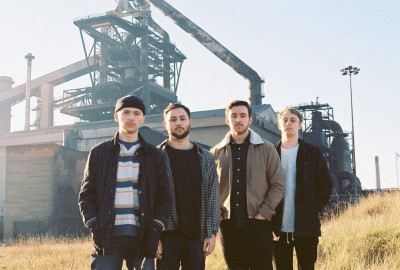 Arctangent is probably our first real big milestone as band

Future Horizons are a 4-piece from Hartlepool whose progressive take on post-hardcore, math-rock shoegaze and everything in between has proved themselves as a band worth your attention. Having just released their vast and immersive single, ‘Neptune & Triton’, the band are looking forward to a bright latter half of 2017; with a tour and a spot at ArcTanGent festival, it’s no doubt their name will garner more weight in the coming months. Sam Robinson caught up with them about their upcoming shows and the future of their distinct sound.

(((o))): Thanks for taking the time to answer some questions, you recently announced your tour at some great venues round the country, are you anticipating playing ArcTanGent?

Jake: Yeah, very nervous excited. It’s probably our first real big milestone as band like, to be playing at such a great festival with a killer lineup, it will definitely be a stand out memory for us all

(((o))): You’ve just premiered your new single and video, “Neptune & Triton” what were the ideas behind the making of it?

Josh – We made the music video with our friend Michael who is a really skilled film maker. We chose to do the shoot in our practice room which normally looks pretty ordinary but he somehow made it look really atmospheric and ethereal. I wish it looked that cool every practice.

(((o))): ·With the release of ‘Brittle Versita’ earlier in the new and this new one, are you looking to release an album or EP in the near future?

Josh: We’re going to record a new batch of tunes at the end of the summer, we’re really excited about putting together our first real record together and we’re excited to play the songs live.

(((o))): Future Horizon’s sound is definitely unique, likely to be why you seem to have picked up some attention recently, would you say the band has any main influences?

Jake: That’s great to hear! The main ones collectively are probably The Mars Volta and The Fall of Troy. Individually we’re a bit of mixed basket, I heard Will was singing Richard Ashcroft on the karaoke down the pub the other night.

(((o))): ·Is there anything you’re currently enjoying musically?