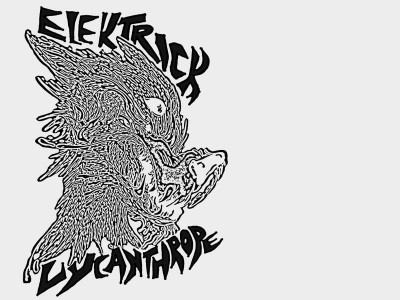 The intent bashing of a cymbal by SavX (Edwin Pouncey) proclaims the ritual to have begun: having solemnly grasped the attention of the congregation, he proceeds with a spirited reading from an old tome:

“I am told that the usual initiating ceremony consists of drawing a circle, from seven to nine feet in radius, in the centre of which circle a wood fire is kindled – the wood selected being black poplar, pine or larch, never ash. A fumigation in an iron vessel, heated over the fire, is then made out of a mixture of any four or five of the following substances: Hemlock (2 to 3 ounces), henbane (1 ounce to 1-1/2 ounces), saffron (3 ounces), poppy seed (any amount), aloe (3 drachms), opium (1/4 ounce), asafœtida (2 ounces), solanum (2 to 3 drachms), parsley (any amount).

“As soon as the vessel is placed over the fire so that it can heat, the person who would invoke the spirit that can bestow upon him the property of metamorphosing into a wolf kneels within the circle, and prays a preliminary impromptu prayer. He then resorts to an incantation, which runs, so I have been told, as follows:

And so on into a declamatory voicing of the ritual incantation, while collaborator Sharon Gal plinks dramatically on piano. A weird encircling of the audience then follows, with a harsh (and harshly recorded, and harshly reproduced) wolfcry put through a megaphone, which is then walked by a veiled figure slowly through the crowded semicircle of the audience. The balance shifts then between the two performers on stage, with Sharon Gal rising in front of the subtly shifting colours of a screen background, and SavX now seated, back to the audience with a guitar. Sharon Gal vocally as well as physically embodies the dark metamorphosis, complete with bared teeth and snarls, growls and grunts, accompanied by the scraping and skinning of the string instrument by her collaborator… you can almost see her teeth and fingernails lengthening, eyes glistening. A striking performance. It continues with more varied experimentation with various contraptions and circuits, guitars menaced with amplifiers, more unbalanced cymbals, and a further treading of the ritual circle by the gruff megaphone-lupine squalls.

After a short break for half the audience to briefly go outside to yell at the moon/smoke, the second set of the night begins, centring on Dylan Carlson. Drone guitarist, Earth-founder and latterday explorer of a mythical Albion peopled by faeries, ancient stones and repeated folk songs, Carlson presents an extended take on the werefox tune ‘Reynardine’, recorded by Martin Carthy, Bert Jansch and Fairport Convention amongst many others. The latter version, on Liege & Lief, listened to with Carlson in mind, is actually already close to his signature style: long, reverberating chords left to hang, with the song-ness draped lightly over the cavernous resonance below. Clearly something about this chimed, as Carlson not only recorded this song (a fairly close cover, by his standards, of the Fairport rendition) on solo album La Strega & The Cunning Man, and even took a line from the song (‘His Teeth Did Brightly Shine’) for a track title on Earth’s spectacularly gloomy Angels of Darkness, Demons of Light II.

Anyway, what we hear tonight is more expansive and deconstructed than his recorded version, accompanied at first by dancer Holly Carlson and then Simon Fowler, on a sort of small bass keyboard type item. Unusually, we hear Dylan’s own vocals, reciting the standard version of the song’s three verses over his emplaced and patient strumming style. It’s a tale of encountering a woman on the hillside who is charmed by Reynardine, initially challenging him but then whisked away for evermore to unknown realms.

Carlson is wearing a great maroon velvet jacket, a subtle and sharp fox reference perhaps (another foxy song Carlson has recorded, ‘Reynard the Fox’, has the protagonist complaining of his dashing red coat being spoilt by hunters). And during his wife Holly’s dancing, wavering to the reverbed guitar stops, twisting and winding in time to the curves and waves of distortion, it’s difficult to avoid hints at the song’s narrative appearing in their joint performance (that sly, old Reynardine…). After this section outlining and expanding on the musical theme, Carlson’s collaborators switch and he’s joined by a wandering, reactive footing on the keys which complements his ever more abstract explorations of the song, miming our fox-bewitched transportation from mountainside stroll to misty castle enchantment.

After this spell suddenly wisps away, we’re treated to a new song with a descending clanging riff, from new solo record reportedly out this April, before two renditions of Earth classics. ‘Old Black’ is always, always brilliant to witness, one of Carlson’s great contributions in that it has the rare quality of sounding instantly ancient as soon as it was released, tapping into something simple and profound. This time round it’s good and noisy, crackling with distortion energy throughout a widened latter section. Then for the set closer, one of the best versions of ‘Bees Made Honey in the Lion’s Skull’ I’ve heard, the repeated three-note figure sounding out a question like a knife turned slowly back and forth, glinting in the dark, see-sawing idly then with gradually more malice and intent.

It turns out the werewolf reading in the opening set is from a 1912 text, ‘The Werewolf in Russia’ by wandering writer in search of paranormal entities Elliot O’Donnell. While O’Donnell seems to have been a true believer in things coming from beyond, the interesting thing for me are the bits of the text (included in the performance tonight) which highlight the distancing, the hearsay and story-telling nature of the text. The reading began with ‘I am told that…’, and later, we hear, ‘the incantation runs, so I have been told…’.

This, too, adds some magick to the werefox song – the lyric line of is an outside observer to some of the main drama: “One evening as I rambled/among the leaves so green/I overheard a young woman/converse with Reynardine”. And the ambiguity, the complete absence of being told what happens next or in the end lends a further mysterious fascination to the half-tale. The effect (used with great gusto and humour by Lovecraft, incidentally) is a sort of simultaneous truthy and non-truthiness – we can grin at the “someone told me in a pub” credulousness of the writer, but at the same time, it’s somehow easy as well as appealing and enjoyable to attribute dark and hidden knowledge to that imaginary other teller who told our teller.

Apparently, in early known versions of the Reynardine song, the lead character was a mere human male, perhaps an outlaw, whose eyes rather than teeth did the seductive shining, with the strange transformation into magickal fox-man emerging in later examples. It’s thus described in an online grimoire of folk song as a rare example of a song that has become more magical over time rather than less. I don’t know how rare the phenomenon is, but it’s certainly interesting in light of the two performances tonight, which were brilliantly brought together with related but contrasting themes and sonic manifestations (more of this kind of experimentally themed programming to be encouraged!). Both sets tapped into an imagined enchanted, mythical past, where the magick might actually have been created more by the contemporary evocation of how things might have been around the edges of a pagan-inflected past, as much as inherent in the old ways. But do not let any supposed hard rationalism fool you: just because these magick beings are imaginary, sonically conjured, and trickster elusive, it doesn’t mean their teeth and claws aren’t real.

Owen’s book, Mysticism, Ritual & Religion in Drone Metal is available from Bloomsbury Academic here https://www.bloomsbury.com/uk/mysticism-ritual-and-religion-in-drone-metal-9781350025103/. It’s absurdly expensive, so ask your library to get a copy!