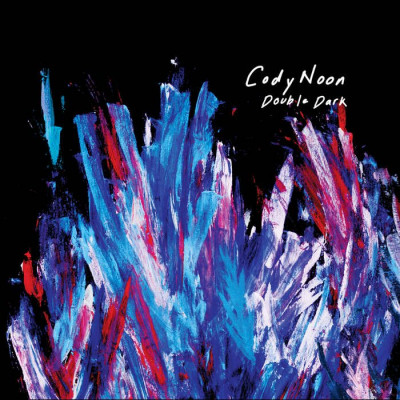 There are times when to say ‘no real surprises’ or ‘more of the same’ is a very bad thing. Nickelback, for example. Any AC/DC song. Ed bloody Sheeran.

Not so, however, with London duo Cody Noon. Oh no.

OK, to be fair, their new album ‘Double Dark’ ISN’T a radical departure from last year’s ‘Bobowler’ or even ‘Tiny Manticore’ but, as I love both of those dearly, I hardly consider that to be a drawback. So, I’ll set out my stall right from the start, I (SPOILER ALERT) really like this record. Now I’ll talk about it a bit, if I may.

Cody Noon work with a very small tool kit. They have Charlie Butler’s guitar, picking out little melodies which often don’t go quite where you expect them to, and Suzy Antoniw’s mumbling bass. Other than a very minimal drum machine, that’s pretty much it. No singing.

You might remember 1a while back when I reviewed ‘Bobowler’ that I compared Cody Noon to a cat. Well, I stick by that comparison. They’re languid and slinky and prone to sudden bursts of feral violence. Songs like ‘Lady Crystal Nightshade’ and ‘Concept Thinking’ will waft you along gently in their dreamy skeletal arms before unexpectedly stabbing you in the ears with a rusty chisel of distorted discord.

Now, obviously, the ‘quiet-loud-quiet’ thing is hardly a novelty, but Cody Noon seem, to me at least, to make the leap from dream to nightmare harsher (in a good way) and more grating (also good) than most other purveyors of instrumental music.

‘Instrumental music?’ Is it post-rock?’ you ask. Well, I don’t know really. It kind of is. And isn’t. I have a hard time trying to find the right box to put them in. I’d call it ‘slow-core’, but somebody else got there first. No, I think, on balance, that Cody Noon are too sparse and skeletal to be called a post-rock band. They’re, for the most part, dreamy and drifty. Similar, perhaps to the likes of Ana Never or the late lamented Gasgiant, but without all of the standard post-rock padding. Post-rock with all of the comfy stuffing removed.

If you’d like to force me at gunpoint  to pick out a couple of favourite songs I’d go for a pair from the middle of the record. First, ‘Rosehip’, a few seconds less than 3 minutes of simple guitar and bass, no drum machine, no loud bit, just loveliness. Followed by the rather lengthier ‘Participation’ which, in its near ten minute length, contains all of the essential Cody Noon elements. That spindly guitar, that muffled bass. A tiny little melody which almost isn’t a melody at all. That drum machine, sounding like the echo of water dripping from the roof at the back of a deep, deep cave. That abrupt chisel stab, like waking from a warm cosy dream into a reality of bandsaws hacking into rusty metal plates. Then that harshness into a long dwindling fade of distorted bass. Love it, love it, love it.

Finally, a little challenge. See if you can find and identify the song that sounds a tiny little bit, at the start, like a very well known Metallica song, and then, unsurprisingly, doesn’t sound like Metallica at all. Ten smug points to you if you can spot it.