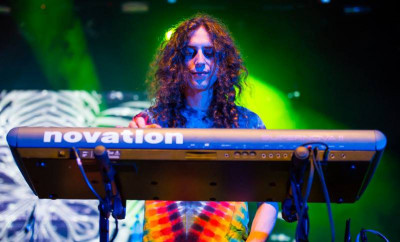 A spark can come from anywhere, and it happens when a profound feeling makes contact with an instrument. After catching the first spark, it's almost like the music tells you what to write and it’s just a process of discovery.

Dave Cooper sits down with Silas Neptune, son of illustrious Ozric Tentacles multi-instrumentalist Ed Wynne, about his debut album The Scales Of Tahuti and the “odd mix” of influences that informed it, and the joys and perils of being a 21st Century One-man band.

(((o))): Let’s start at the beginning. I can well imagine that you were exposed to music from a very early age, but what made you first want to pick up an instrument?

I suppose subconsciously I always wanted to play. I spent a lot of my childhood running around the Ozric studio watching them all having fun. I really wanted to join in, but I had to grow up first. When I was thirteen it felt like a good time to start, so I picked up a bass guitar and started fumbling around from there.

(((o))): You seem quite at home with a variety of instruments – do you have a favourite? Which instrument do you typically use to write, or does it vary depending on the initial idea?

At the end of the day an instrument is just an instrument, a tool to formulate music with. If I have to choose, then my hands are my favorite instrument. The more you come to really know music, the more it will flow into whichever instrument you pick up. Sometimes a riff comes to mind and you just have to grab whatever’s nearby before you forget it. I suppose I most frequently write on a keyboard just for it’s simplicity, but really it’s down to what mood I’m in. I enjoy challenging myself by using an instrument I don’t know so well; usually some new and unexpected ideas come to the surface.

(((o))): More to the point, how do you write? What course do you take: do ideas mostly come from jamming or do they come from a more structured compositional process?

Writing every track is like its own journey and each one teaches me so much about music and life. There’s no specific process, each track unfolds in its own way, but to begin with there is always a spark, a seed. Without this, it will likely fail and be discarded. As with plants, I nurture them and try to give them what they need; food, water, air, warmth and light. The ratios vary depending on their natures. A spark can come from anywhere, and it happens when a profound feeling makes contact with an instrument. After catching the first spark, it’s almost like the music tells you what to write and it’s just a process of discovery. As the track develops, I usually play along and see what ideas come to the surface. I often experiment with random chance, and when you’re really having fun it doesn’t seem so random any more. In the end it all gets woven back into the composition.

(((o))): It’d be remiss of me not to mention your dad and the Ozrics at this point. How has working with the band influenced your writing? Whilst your music is clearly in the same vein as the Ozrics material, how would you say it differs from the Ozric sound?

My father has been the most important influence on me as a musician. Without him I wouldn’t be what I am. Playing with his band allowed me to start waking up as a musician. I had to keep up with them from a fairly young age and it really pushed me forward. I’ve always been surrounded by Ozric music and it worked its way deep inside me. Naturally this comes through in my own music. I draw a lot of influence from other places too, so it has my own flavour. I seem to be taking a more electronic direction, but it’s hard for me to describe the difference. I’ll have to leave that for the listener to decide.

(((o))): The Scales Of Tahuti is your first solo album, although the musicians who appear on the record will be familiar to most Ozrics fans. How was it working with them outside of the band? Were you very much a bandleader or director, or did you give them a certain amount of latitude when recording?

Well, they’re some of my closest friends and I love working with all of them. I prefer to let them interpret the track themselves; I like to capture their characters. They are all very competent at their art and they know what’s required, I just point them in the right direction and tell them to have fun with it.

(((o))): Was there a certain seed for the album, conceptually or musically? Which of the tracks was the first to take shape?

I think really the album just gradually formed over the years. I started writing music very soon after I began to play and I have so many unfinished projects. Some of them were shining brighter than others so I collected them for an album. Each track on Tahuti is like a little phase from my life. The earliest one on there is ‘Gateway to Dreamtime’ – it started in 2010 when I landed on a strange guitar riff which intrigued me. It turns out it was counted in 9, with a 7 to turn around, so I worked around this and developed it from there.

(((o))): The Ozrics have always taken a strong influence from the early 1990s dance scene, and The Scales Of Tahuti is no different – the powerful electronic pulse that runs through the album takes that influence to the next level. Was that an area you particularly wanted to explore, or was this a consequence of how the tracks were recorded?

Well, I did grow up in the nineties, so the electronic scene had its effect on me. But no, it wasn’t really premeditated. I just make the music I want to hear and influences come from everywhere. I can take things further in the electronic world; human limitations are released to a great extent.

(((o))): You’ve been playing one-man sets recently as the support act for Nodens Ictus, was that the first time you’ve showcased the Scales Of Tahuti material? How did you feel it went? Were you apprehensive about this at all? It must be quite exposing if anything was to go awry, when you’re the only person on stage!

I was actually playing some festivals and events in America before this, so it wasn’t the first time I played the material. I’ve been having a great time with it all, it’s amazing watching people’s reactions. I definitely got some surprised faces – I guess they weren’t sure what to expect. I’m never too worried really, I’ve been gigging for a while now. There’s always a chance things could go wrong, but you have to trust it won’t and hopefully it never will. Seeing as I’m the only one on stage, I only need to trust myself and it’s actually easier in a way.

(((o))): Are you planning more live shows? Would you continue to play solo shows, or would you prefer to assemble a band?

I have a few shows coming up soon and I’ll be doing many more as time goes by. For now I’m content as a solo act, though one day, if all goes well, I’m sure I’ll round up a band. I look forward to trying to explain the strange parts they’ll need to learn!

(((o))): How do you feel about how The Scales Of Tahuti has been received?

There have been some really great comments so far and each person seems to be blown away with a different track. It’s quite varied, so people usually find something on there they like. Perhaps it takes a few listens to catch on to what is happening, it’s quite dense and hard to access it in just one listen. I feel like it’s growing on people nicely.

(((o))): How about new material? How does what you’re working on now differ from the Scales Of Tahuti material?

I’ve been having so much fun in the studio since this release, experimenting with all kinds of things. I’m very excited about my next musical phase. I feel a little secretive about what I’m working on, but it seems to be heading into new territory.

(((o))): Which musicians do you feel have had the biggest influence on you? Which artists do you particularly enjoy listening to?

Well, of course Ozric Tentacles has had an incredible impact on me. My father’s been guiding me from the beginning. After that, Maurice Ravel. This may be surprising, but I’ve drawn so much from his music, the depths in his harmonies are like nothing else. On the electronic side, Squarepusher and Tipper showed me how to misbehave in the electronic realm. When I was younger I was obsessed with early Caravan and Hatfield & the North, so I suppose I have an odd mix of influences.

(((o))): If you had to pick five Desert Island Discs, what would you choose?

(((o))): Finally, is there anything else you’d like to add, for those reading this interview?

I’ll just say that there is plenty more music on the way; as long as I’m alive I’ll be making tunes. There are many realms left to explore and I look forward to sharing more with you all very soon and thanks to everyone for listening.

Many thanks to Silas for taking time out from his chaotic schedule to complete this interview. ‘The Gates Of Tahuti’ is available now via Bandcamp.