(((O))) Interview: Memories and Mesmerists – An Interview with Peter Murphy 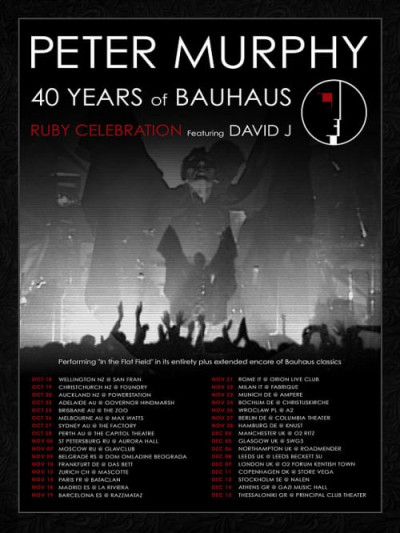 My bass player tells me “You make love to every single person in the audience. Even the straight guys are just mesmerized!”. This is attraction. There are asshole mesmerists and quality, magnificent mesmerists of beauty and art who draw their audience into this space.

Dark, mysterious, and truly unpredictable. Peter Murphy’s persona and legacy as the ‘Godfather of Goth’ still reigns immaculate, untouched by the treacherous, unforgiving tides of time. Instantly recognizable, the former Bauhaus frontman need not utter more than a single syllable to make his presence known on any given track, an accolade due in no small part to the ever-growing, undying love for the artists’ former band, now well established as a household reference in rock music.

The singer, having reached the age of sixty-one earlier this month, is keeping himself as busy as he’s ever been, undertaking a month-long residency in San Francisco, where he is set to perform his entire solo work album-by-album as well as perform a series of Bauhaus performances to celebrate the bands’ fortieth anniversary. However, after having been rescheduled from last year due to severe health issues affecting Murphy’s voice, unfortunate, unforeseen circumstances have once again forced the artist to postpone the performances. As though I had not been oblivious enough as to what to expect, I was scheduled to interview the cursed character a few days after the news broke out, although I suspect nothing could have prepared me for the type of interview I eventually found myself in. M.Murphy’s very strong character quickly took hold of the frame of the interview, leading the discussion across a multitude of subjects, weaving between personal, informal exchanges and abstract, often cryptic insights into his inner-workings.

Disclaimer: The following transcript has been edited to the best of my abilities to narrow down the content to its most relevant parts and to slightly smoothen out the conversation’s hectic flow.

(((o))): First off, how are things going on your end? It seems like you’ve been faced with a number of issues over the past few months.


It’s mainly one issue. I’ve had to postpone my residency where I was scheduled to play all of my albums in a row as well as host a Bauhaus evening. We were ready to go in late February but it’s in stasis now. The subsequent part was supposed to happen on the 26th of June in San Francisco but there’s been this very strange anomaly regarding my visa application for America. There’s one application that is still in “progress”, and it’s now been six months, which is unheard of. It’s not like there’s any kind of strange “immigration issue” with myself, at least not that I know of. I don’t know if they’ll find out about my “real life”, what I do in the dark entries: chasing cougars and rearing black butterflies. Perhaps that’s an issue …

A lot of people were flying in to come and see the show so I had to postpone it and I’m off to Belfast again to apply for another visa. I most likely applied as the only Englishman who applies from Istanbul for an O-1 Visa, for those who possess “extraordinary abilities” as they call it. I’ve done it before, year after year, but now there’s a big immigration of Syrians and all sorts of people coming in, and perhaps that may be affecting it. I don’t know, God knows. One way or the other it will come through. There’s been a bit of a stress because we kept expecting everything to finally go through for the past few weeks.

In the meantime, it’s been frustrating, because we had done a lot of great work. The band rehearsed for an entire month and I was rehearsing here in sync with them with audio in Turkey. I also had an idea to invite David Jay as a guest bass player on the Bauhaus night, to celebrate the band’s fortieth anniversary. I already did the 35-year anniversary world tour of Bauhaus as Peter Murphy and it was great, but I was the only one holding the flag.

I wanted to invite David as a sweeping, genuine “reaching out” to him. I expressed to David that he needed to get back to his root, to this metal inside that we all gave him. We all carry that. One of the reasons why bands don’t talk to each other is that members take the stance of hurt children or disaffected ex-lovers because things run very deep when you work together. I include myself in that, by the way. With that being said, it is important to reach the real things. I wanted this Bauhaus thing to be genuine and I would never hire hacks.

The band I have now is relatively new, including one wonderful new drummer. David has now joined my idea to come together and join us on the tour. We’re now working together like we’re in the band again, it’s so great. It’s very authentic. David is no session bass player, he’s a fully-fledged artist, which we all are and were. It’s great to have “the real shit” going on to my right on the stage. I’m much more of an arranger now and my depth of ability to pull together the event is very honed. I’m probably the smartest, most ethical businessman of us all in terms of dealing with that aspect and organization

Given that the O-1 visa doesn’t restrict me from travelling anywhere else, we were able to play the first of what is now going to be the worldwide tour, beginning with a few festivals. We did the first of these shows at a festival in Mexico. I brought my lighting-man, whom I had been prepping and working with remotely. We just wanted to walk on and kick it, throw any cobwebs out and any expectations. We do some very spontaneous stuff on these shows. All black-eyed Goths beware! Come witness the original!

We rehearsed every single album and we also have a ‘stripped’ evening with only two instruments. The number of nights for each album is determined by the number of people who are buying tickets. We’re trying to figure out what interest there is on each of the albums. For instance, we’ve got two nights of the first album, three nights on the second… and we go through it chronologically. I spent a long time preparing stem tracks for additional arrangements and flourishes, which I’ve also included in some of the Bauhaus stuff.

In terms of the visual element of the anniversary shows, it’s going to develop as it goes along. We’re taking a lighting designer with us and there will be moments that will allow me to do what I feel with what’s happening.

(((o))): Diving back into your back catalogue, were there any songs that stood out in particular?


I have a very inbuilt body memory and a very strong memory of events, so I remembered every session. It’s like when you encounter a smell of your old school. I haven’t played 50% of my own solo work live, so I had to figure out whether this was all really going to hang, and I think it does. ‘God sends’ is one that really stood out. ‘Seven Veils’ is wonderful. ‘Never Man’, off of the first album, also stands out.

(((o))): Are there any songs towards which you developed a new interpretation or meaning?


Lyrically, I did that with a couple of Bauhaus songs which were updated. I think these pieces, on the other hand, are classic in that the lyrics are there but the interpretation is about the way you voice it and sing it. Sometimes there may be a change in the lyrics, but never an update where I wish to ‘rectify’ any lyrics I wish I hadn’t written. I never do that. You never desecrate something that is of its time.

(((o))): One remarkable aspect of your work is how it stood the test of time through your career, as evidenced by the fact that your fan base does not age but rather expands to new generations.


That’s a great accolade and that’s all you need to say to make me feel good because that’s how I feel. There is a sense of presence and I think that’s what I tried to evoke when I was describing that kind of attitude that I wanted to wake David up to. I want to perform these pieces as music, as “what is” rather than “what was”.

(((o))): So it’s about anchoring your current work in the present.


It’s not so much an exercise to ‘anchor it’ in the present or a strategy. It just is. It’s not an ulterior motive. It’s kind of like mentalism. When you walk on, there is no ‘I’m nervous’. Whatever it is, you walk on in it, as “it”. I suppose that gets into theatre also. It’s not ‘playing a character’, it’s ‘being what it is.


I suppose so, but in a sense no, because I’ve written the piece. I’m the scriptwriter, I’m the man who wrote it. I’m the director. There’s nothing worse than someone coming off and talking about their song and what they did and saying “Oh, I didn’t mean it. I didn’t mean to be Ziggy, so I retired him”. Don’t tell anybody you didn’t mean it! That destroys something! It was never about what you think, Mr.Bowie.

There’s nothing worse than a band describing their work before hearing them talk about how they go back to their normal lives at the end of the day. What do you mean “normal lives”? Weren’t you genuine? Don’t tell us that you didn’t mean it. If you didn’t, then keep that to your bloody self, because it was brilliant before we knew! It just becomes self-flagellating, pseudo-intellectual bullshit. Bowie did well to avoid it for a long time and to keep an enigma. You must be an enigma. There is a privacy about this. You don’t want to tell the secret; you want to draw somebody to it to find it. This is what creates attraction to beauty. These are the ideals of performance. You walk on and you do it, and this is what I’ve always felt. The moment I walk onstage, I live there.

My bass player tells me “You make love to every single person in the audience. Even the straight guys are just mesmerized!”. This is attraction. There are asshole mesmerists and quality, magnificent mesmerists of beauty and art who draw their audience into this space.

On the other hand, it might be the result of total delusion on my part. Delusion is often linked with an undesirable psychological quirk, sure, but it is also linked with belief. If you believe something, it truly is. It is a fine line though. You can’t construct a belief and then be it, in which case you fall into acting. It just is a feeling in you, a sort of volcanic, beautiful light. Whatever I do, I just am it.  It’s kind of pathetic, really, because that’s all I do.

(((o))): Can you name one of your favourite albums, movies and books?


The first film that comes to mind is Sunday’s Illness.
Book-wise, I’ll say The Picture of Dorian Grey
Album-wise, I’ll go with Music for Airports by Brian Eno. 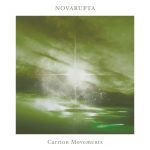 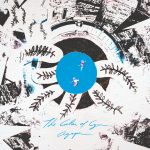 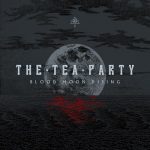