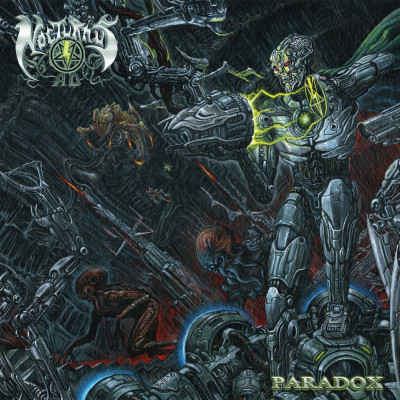 If there’s a niche slice of metal I like, it’s progressive death metal. People in the know will likely gravitate to bands such as Death, Cynic and Opeth, however there is one band who I feel aren’t mentioned nearly enough. Of course, I’m referring to Nocturnus, one of the first bands credited with utilising synthesisers in extreme metal, as heard on their groundbreaking debut, The Key. With their blend of old school death metal, squelchy sci-fi synths and the musical craftsmanship of a prog rock band, The Key now stands as a clear landmark in the land of progressive death metal.

After some further releases and their unfortunate break up, the band was nearly lost to relative obscurity. That is, until now. Drummer/Vocalist and Nocturnus mastermind Mike Browning (ex Morbid Angel) has reassembled the death metal mechanoid with some shiny new laser cannons (or band members, but new laser cannons are never a bad thing). Now known as Nocturnus AD, and with their new laser canno- band members, Browning has set out to create a sequel to The Key in the form of their debut album, Paradox. The goal? To pick up where the original Nocturnus left off over 20 years ago, both thematically and musically.

From the outset, Paradox showcases the iconic Nocturnus sound with the crushing opener ‘Seizing the Throne’, quashing any worries of Browning having missed a beat these past two decades. Synth layers straight out of an 80’s horror film quickly morph into some good old fashioned death metal, with all the shredding and dive bombing guitars you can handle. This song also shows the entire band’s commitment to the old school mantra, through the album’s production style.

In terms of a mix, Paradox is polished in all the right places, with each facet of the group’s dense sound coming through as clear, punchy and brutal. It’s with the performances that Nocturnus AD has opted to keep with the old ways. To some listeners, the occasional off beat hit may be deemed as “sloppy”, however this couldn’t be further from the truth. This album features the same dense, if not more complex musicality as it’s predecessor, with Browning pushing his limits with more frequent blast beats and feel changes. The rest of the band also execute their own intricate phrases with true precision. The blistering guitar passages on ‘The Antechamber’, played by Demian Heftel and Belial Koblak, excellently illustrates the band’s musicianship. Metal albums today generally focus more on hyper edited performances, and the snapping of individual notes to a grid. Nocturnus AD have given this mindset the two fingers and kept the performances raw and true, which I believe massively heightens the dedication towards creating a sequel.

Keeping with this theme of Paradox being a follow up, Nocturnus AD has updated some of their musical schematics. One notable change is the approach to the keyboard work, played by Josh Holdren. On The Key, synthesiser parts were mainly used in the intros of tracks, however they occasionally suffused over the whirlwind of death metal, such as on the song ‘BC/AD’. With Paradox, the synths are placed more at the forefront of the band’s sound, with the screeching solo on ‘Paleolithic’ and the dense sci-fi soundscapes throughout the album, serving as great examples of this change. Some of the keyboard lines also bear a great resemblance to some of those from The Key. For example, the intro of ‘The Banar Sign’ from Paradox, greatly mirrors the beginning of ‘Lake of Fire’ from The Key. This meticulous attention to detail throughout the album is what makes Paradox such a well thought-out sequel.

From start to finish, Nocturnus AD has delivered what was promised with this album, creating an uncompromising musical sequel over 20 years in the making. Longstanding fans of the genre may feel that this album doesn’t bring anything new to the table, however the uninitiated are likely to find Paradox an incredibly refreshing listen. The Cosmic and Occult themes found on this album greatly reflect the combination of the old and the new.

Nocturnus AD aren’t reinventing the wheel with this album, but they had a massive hand in inventing it in the first place, and it’d probably have a lot less blinking lights without them.