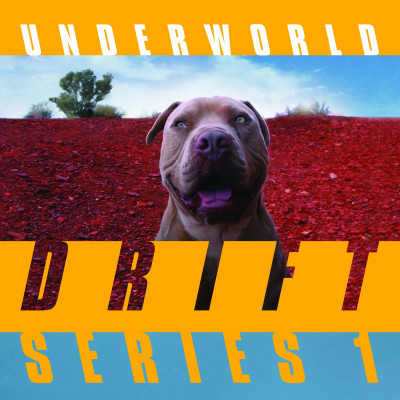 Just over a year ago Underworld set out on an ambitious project to release a piece of music every week for a year on the Underworldlive website. Much of it was accompanied by video and it represented a trip into the unknown: an open-ended (and open-minded) project that had no specific aim other than to take Rick Smith and Karl Hyde out of their comfort zone and see where the journey took them. Some artists would run out of steam, or end up repeating themselves endlessly. And, I suspect that after a year very few bands would have a collection of songs that they could so confidently put on a CD (well, six CDs) and flog to the general public. But DRIFT is a fantastic achievement, not least because of how it was made, and how it sounds so fresh, despite the band making themselves put the tracks out week after week every Thursday for a year.

How to review 50 songs, almost 6 hours of music? A review of such an epic musical undertaking can by necessity only skate across the surface, giving an overview, dipping in and out to show what it’s like. The best way is to try it yourself. But there’s so much to talk about here, I’m just glad it’s a brilliant piece of work.

Week 1 kicks off with the bombastic, in-yer-face techno of ‘Another Silent Way’, which fittingly has the repeated lyric “Go where the hell they want”. Week 2’s ‘Dexter’s Chalk’, featuring techno producer Ø (Phase), one of several collaborators, is a techno mind-warp. As well as being a statement of intent, these early works surely involved setting out the project, as ‘Low Between Zebras’ has a lilting Welsh voice-over explaining the meaning of Drift. This is much quieter, more poetic, and this contemplative vibe features on quite a few tracks. Elsewhere there is the mellow, late-night pop of ‘This Must Be Drum Street’ and the loose jazz of ‘Poet Cat’, while ‘Listen to Their No’ is more upbeat techno, with a chanting vocals that are very Underworld. Every so often there’s a curve-ball, such as the oriental-sounding ‘Doris’, which is very delicate and a complete juxtaposition to the techno throb elsewhere.

Some vocals sound improvised, as I’m sure they must be when working to such tight timescales. ‘Do Breakers Trip’ features a repeated of “what’s that voice, is it in my head?” in a mesmeric loop. Some Wednesday nights must have seemed very long to get material ready for each looming deadline. There are guest vocals on some, such as ‘Hundred Weight Hammer’. ‘Altitude Dub’ is a quiet, lamenting tune that has some very sensitive vocals from Karl. Some of the best tracks have a drone element; these are often the longer songs that build up a vibe and keep it going. ‘Seven Drone Music’ is an example, as is ‘Appleshine’ and the near-15-minute ‘Threat of Rain’. It’s on these longer tracks that the music often stands out. Not being afraid to let things run, not sticking to the 5-minute format, shows how DRIFT allowed Underworld to work outside the box and follow where the music took them.

This body of work can be dipped into, played end to end, or sampled, literally, with the vinyl Sampler LP featuring 10 cuts. Barely a dud track, with an exciting, fresh vibe running all the way through, DRIFT shows that Underworld still have a creative spark that makes them continued essential listening. It’s better, to my mind, than 2016’s Barbara Barbara, We Face a Shining Future. Although critically acclaimed, that album didn’t grab me anywhere near as much as this one. DRIFT stands with their best releases, Barking and Second Toughest in the Infants, and shows the same forward-thinking intent as the utter classic that is Dubnobasswithmyheadman. Get it, absorb it, listen in awe and consider what the world would be like if all your favourite bands could release music of this quality on a weekly basis.