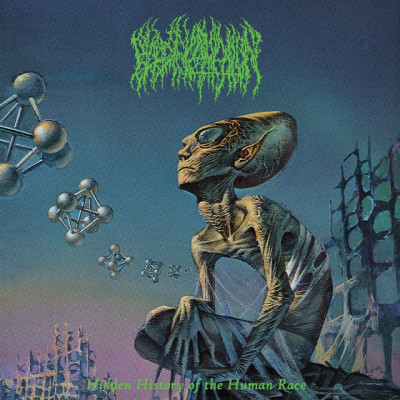 Hidden History of the Human Race by Blood Incantation

So this review is submitted a bit later than planned, by which time everyone on earth and beyond, in all seventeen dimensions has heard of this record, and knows that 73.8% of reviewers think it’s the death metal album of the year (the rest saying Tomb Mold…). And while I won’t comment on that particular title, it’s certainly remarkable, and well-deserved, how much attention its getting.

Right from when the album artwork was released it caught my eye, having a few weeks previously bought a battered second-hand sci-fi book by Brian Aldiss with that exact image gracing the cover (Time, Space and Nathaniel the book’s title, by the way). So for a start I was amused that people were frothing about how a similar picture had been (unauthorisedly) used for another metal release… Anyway, that level of discussion for a sci-fi-fantasy picture is already something of an achievement, but happily that’s eclipsed by the music contained behind the cranially-contorted cover humanoid.

Hidden History of the Human Race has four tracks, the first three of which are 5 and a half to 7 minutes, followed by what the vinyl-sniffers will refer to as a ‘sidelong’ track of just past 18 minutes. It gives a neat structure to the release, sort of a meaty EP of solid complex sci-fi heaviness followed by a sprawling death metal prog epic that expands into further speculative realms of experimentation.

The first half begins at pace with ‘Slave Species of the Gods’, a frenetic riff going through a few cycles before sprouting weirder offshoots and a great deep-space sonar blip that flashes across the riff (yes I know sonar wouldn’t work in space but that bit is so strange and haunting that it defies physics, so there). Next ‘The Giza Power Plant’ starts with bits coming in from all over, which prepares for an amazing break into a descending modal twisting spiral which is probably the defining moment the first time you hear the album, before you really begin sinking into the complexities and the wealth of riffs and bits sorcerously welded together. ‘Inner Paths (to Outer Space)’ is a much more ominous emanation, beginning with dark clouds of static brushed with searching space-insect tentacles, until the drums bring in a chiming riff then joined with a mediated voice-over with a sound that reminded me for a second of the robot-voiced intonation of Revelation at the start of Bongripper’s Great Barrier Reefer.. it gets all slashing and biting but altogether theres a surprisingly evocative drift in amongst the machine-cutter precision.

To the final track then, ‘Awakening for the Dream of Existence’. It’s a beast, beginning with maybe the most furiously aggressive musical section on the album, twinning with the vocal growls to intense effect. The guitar is let loose but only within an intricate cage of riffs and just staggeringly sharp drumming, and the growls return to guide the guitars through a strange techlabyrinth into freefall… if for the last six minutes we’ve been wanting space to take a breath, we’re suddenly hurtled into the too-much-space of deep cosmos, creepy ambiences and lurking signal noises flitting past. More frenetic madness is to come, before atmospheric sections again echo into the eerie blackness; it’s quite the demented space-death epic.

Complicated, weird, heavy, tight and uncompromising but also cerebral, curious and accessible. All praise that this record has received already is definitely well deserved.