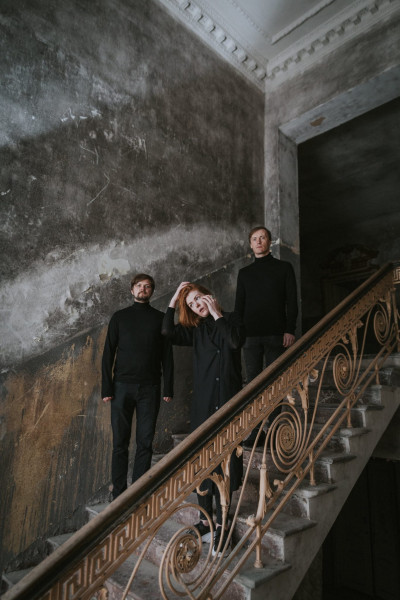 I think that for me, part of the process was also just getting rid of this very heavy sadness that sort of left my physical body when I put it into piano and voice.

Pamirt is a project by Kristiāna Kārkliņa, singer in Latvian black metal band eschatos. Amidst the current turmoil, debut album Mausoleum was released, which is a stunning piece of work, driven by the eclectic vocals, but now also supported by a full band. The music is dark, intriguing, and full of emotions. Yet it also tells stories

I’ve had the pleasure to listen to this record and it is well worth your time if you enjoy the work of artists like Lingua Ignota, Diamanda Galas and maybe even some Dead Can Dance. But above anything, listen to this album. You won’t regret it.

I was pleased to ask the artist herself about the concept behind the album, the creation and the difficulty in releasing such a personal piece of work.

E&D: What does Pamirt mean and how did this project get started?

Pamirt means to die slightly or to die for a short moment. It seems interesting to me as a concept because I’ve never encountered anything similar in any other languages I’ve studied.

I believe that first ideas for the title track Mausoleum go as back as far as February 2017. At first, those were just some ideas that didn’t really fit eschatos. There were quite some so in spring 2018 I started to see that this music could potentially be released as my solo project. And it was so until fall 2018 when I returned from writing session in Berlin and we started to work on demos with Edgars and Edvards. In spring 2019 we started to play live as a trio, about 5 months before we even started recording.

E&D: What was the process like to carve out this new entity next to your existing band eschatos? I mean, musically Pamirt is quite a bold undertaking and not something that stars on a whim.

The creative process of eschatos is something entirely different. There’s 6 of us and it is a collective process wherein Pamirt for the first time I was making the artistic decisions and for the first time I wrote music that started with voice and piano. Thank god I almost never had to argue with my colleagues about other instruments. We’ve been playing together for years so it was expected that we’d all be riding the same wave.

E&D: Who were you looking to as inspiration to make this record? I mean, I’ve made some references in my review but I’m curious where you come from.

In terms of artistic inspiration, I believe that we accumulate everything that we take in and create an entirely different entity, something that cannot really be traced back to one particular source – going to see opera as our family tradition, attending church with my grandmother, listening to black metal, studying art history definitely. I think that for me, part of the process was also just getting rid of this very heavy sadness that sort of left my physical body when I put it into piano and voice.

I could probably do top 10 albums of all time though.

In regards to Lisa Gerrard, Galas and Lingua Ignota I believe those are all culture-changing artists and I love all three of them!

Galas was an artist I discovered when studying art history some 11 years ago and somehow I always saw her as part of the performance art scene with her active voice for Aids victims.

E&D: It would seem that this music, project or expression, all fit, is highly personal. What is it like to put something like this out there?

Very strange and also intimidating at times, for sure. But also it is not really one coherent story of my life, more like a hybrid of different events and emotions. Except maybe for ‘This dinner’ that is a vivid memory of my time working at an art gallery where my job was to convince people to buy and collect art created by amazingly talented, sensitive artists to point where I had to ask myself this question – why am I trying to convince someone that their art is good and meaningful if the person being convinced did not always see it that way.

E&D: Still, to me this seems like the sort of music you either have to do with full conviction, it has to be right. You can’t do what you do with Pamirt in a mediocre way, you can’t wing it.

That is true, it is very emotional to perform these songs. And it is a trance in a way when we do.

E&D: What was the process like to create Mausoleum, and can you explain the title?

The title track was the first song I worked on for the album. At first, it was just vocal layers and lyrics with no instruments at all. Then the song sat on a shelf for about a year when I came up with this very simple instrumentation for piano. I used to take piano classes, but I never considered getting back to playing before that because it was the voice I was interested in. And I think as an artist I still mostly am. The title of the record came from this first song and it also seems to capture the general feeling of the record – a secluded place for contemplating and remembering.

E&D: What vocal training have you had? Because your voice is indeed at the heart of this record.

I used to sing in a choir a long time ago. Then around 2003 I began to explore extreme vocals and started to perform with my first band. But otherwise I just really like to experiment with my voice and what it can do.

E&D: What sort of response have you received this far? It seems the Latvian scene is ready for music like this, right?

The response has been overwhelming. People reaching out from different countries with kind words. The underground community in Latvia, especially in Riga is tightly-knit so I believe people already knew about the project before the release. Of course, there will always be rock’n’roll traditionalists, but that is understandable and I do not really believe anything should be for everyone.

E&D: What future plans are currently brooding for Pamirt? Are you planning to tour with this entity? Are there other release plans in physical formats?

We were planning a small release tour around Baltics but that is currently on hold. We will probably do a small show in Riga though when the lockdown ends and release limited edition cassettes. We’d also like to get our record on vinyl till the end of the year especially because it was mastered by James Plotkin. For that, we are still looking for partners.

E&D: And a second record perhaps?

Definitely, composing is already in progress.

E&D: Is there enough left in the well that Mausoleum was drawn from?

E&D: If Pamirt was food, like a dish, what would it be and why?

I know it’s not a dish, but probably red wine. Dry and heavy. For an acquired taste. I’m currently into Italian wines for no particular reason. Previously it was Portuguese.