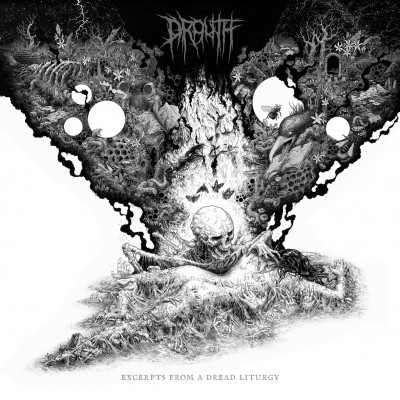 Excerpts from a Dread Liturgy by Drouth

Portland blast-beat specialists Drouth have been around for some time now. Formerly known as Contempt, the quartet have been playing their intense version of tremolo strewn black metal for about eight years. Excerpts from a Dread Liturgy serves as only their second full-length in all of that time, following on from 2017 debut, Knives, Labyrinths, Mirrors. Their sophomore album is coming courtesy of renown label Translation Loss, though, which should tell you a great deal about the calibre of the band, the quality of the release sonically and physically, and of the heights Drouth themselves presumably aspire to.

In truth, Excerpts from a Dread Liturgy still feels like the album before the true breakthrough. It is an accomplished album that deserves, and will surely receive, a great deal of acclaim, but it is by no means perfect, and doesn’t feel like it has quite momentum or sheer heft of quality to cut through to the majority of the scene. Sometimes those ‘surfacing’ moments are quite ineffable to predict, other times it seems inescapable, but before pondering such unwieldy subject matter, there’s the matter of focusing on Drouth’s quality second record.

The album opens in fine fettle, bludgeoning the listener right out of the gate, with ‘A Drowning in Sunlight’. While the band are extremely adept at furiously thrusting themselves through quality passages of sonic abrasiveness spilling from the guitars, drums almost running out of room to fit in just one more crash and a manic, throbbing bass, it is when the band show restraint from the unrelenting battery to summon an atmospheric, cryptic interlude that provides strange, startling and welcome juxtaposition, that their true quality shines through.

‘An Apiarist’ is a track that froths and foments with menace and is reminiscent of fellow countrymen Uada. I’ve previously read that Drouth have repeatedly been compared to Uada, and on the evidence of the aforementioned track and their debut album, I do not think the four members had too much room to complain, but this new LP does set them apart from Uada and similar kin, and in many ways the rest of record reminds me far more of how recent European acts have been reimagining black metal that consciously still pays great credit to the early progenitors of the genre. ‘An Apiarist’ is the longest track, only just shy of double figures, and is a fantastic piece of musicianship and one I believe will surely be a favourite to bask in live. It is powerful, muscular and a must for anyone who enjoys their black metal unrelenting yet with enough detail to please the attentive and astute listener.

‘O Time, Thy Pyramids – An Unfinished Nightmare’ is, a) an ace name for a track, and, b) another fantastic addition to the album. Seven minutes and change of scorching blast beats, more frantic tremolo guitar picking and ‘his arms and legs have begun to blur’ drumming. It is another track that proves Drouth have the ability to create soundscapes that aren’t forever rooted in fury, opening as it does with sinister, unsettling, guitar work that roils and heaves with discomfort and unease, before finding footing and laying waste to all in its path. Once again, Drouth serve an impressive slice of extreme metal. This is then followed by ‘A Repulsive Act Shrouded in Flesh’, the jewel in the crown of Excerpts from a Dread Liturgy, finding their creative zenith thus far – a wonderfully winding journey through black metal old and new, hunting down and hurtling past high point after high point, conquering each and every peak. If a follow-up could bottle the mindset that created these eight minutes, Drouth will certainly be a name of note soon enough.

The album closes with ‘A Crown of Asphodels’, a perfectly serviceable song that elsewhere in the track-list would have perhaps been more worthy of note. However, following ‘A Repulsive Act Shrouded in Flesh’, it is completely overwhelmed and overshadowed and the question quickly arises as to why it was chosen as the album’s last word, compared to the euphoric high point of the record, just gone before. It is a question that I cannot answer, but greatly puzzles me still at the time of writing. Being the shortest track in length and serving as the only one of the five that doesn’t seem fully formed (and certainly affords little resolution, ending abruptly as it does). ‘A Crown of Asphodels’ is therefore a nagging, odd end to an otherwise very accomplished record, a record that had prided itself on structure, perhaps above all else.

Excerpts from a Dread Liturgy is a fine addition to the American black metal canon of 2020 and its recent years gone by, as well as Drouth’s diminutive discography to date. Maybe it is the latter fact – with such a limited number of releases in their near decade existence – that perhaps I expected more from the record than was fair to demand. The album is very well produced, with songs structured incredibly tightly and that showcase the quartet’s ability for subtlety and nuance along the way, sports killer artwork and has the backing of an extremely well-respected underground record label. Not bad at all for a sophomore release. Drouth’s new album is one worthy of note and I for one am excited for their third. Perhaps then will be the moment they punch through into the upper echelons of the USA’s black metal cohort. Soon, soon… 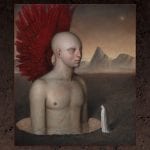