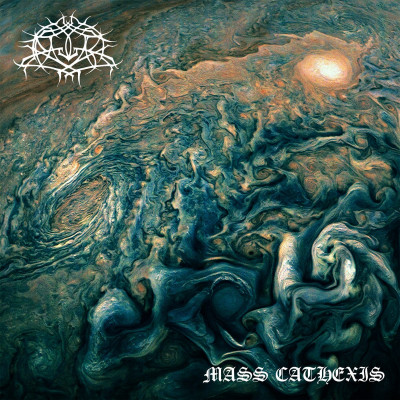 Since 2007, Krallice have been bringing our ears some of the most dazzling, extreme extreme metal, that we have ever heard. A talisman group for New York’s collection of experimental, avant-garde metal musicians, it has always been with a sense of great anticipation that we wait during the build-up to a Krallice release. 2017 was the first year the band added a real sense of surprise to their release announcements, with not one, but two albums on their way; Go Be Forgotten and Loüm, a collaboration that saw Dave Edwardson of Neurosis fame drop his bass and step forward to the mic. Both further cemented Krallice as a band to cherish. This year, the quartet took a step further, dropping their new album, Mass Cathexis, out of nowhere. That’s right, Colin Marston and Co. have gone full Beyoncé on our asses. (I guarantee this will be the only review of Mass Cathexis you read that mentions Beyoncé – © Echoes and Dust).

From their first LPs on Profound Lore – Krallice, Dimensional Bleedthrough, Diotima – one could already tell Krallice were a different beast, something special, the latter blowing many a mind around the world upon release. Their take on black metal was unique. Colin Marston – producer extraordinaire – and Mick Barr approached their guitar playing with forensic focus, creating passages that made Krallice black metal, but came at the playing from a vastly different, almost modern classical, almost Spanish guitar angle. Krallice also brought this obsession with technical form and structure and placed an overwhelming focus on their rhythm section. Marston, himself a celebrated bassist, contributed to the low-end, but Nicholas McMaster and Lev Weinstein are a formidable duo in their own right. They have consistently underpinned the deranged aural fantasia Marston and Barr conjure, with a foundation that is certainly solid, but makes me think of those floating planets knocking around in Avatar. They’re solid landmass, sure, but they are also untethered and have a mind of their own.

Years Past Matter (2012) was a real ‘moment’ for Krallice and remains for many their favourite album to date. However much the previous three albums had shocked and awed, Years Past Matter seemed a seismic moment, whereby people truly began to take note that the band were doing something different and, perhaps more importantly, sticking to their artistic guns. There were no inflection of the burgeoning – and soon to be amorphous – blackgaze in this album’s sound. The quartet just kept pushing the envelope, again and again. Damn, they burnt the envelope and used the ash to write a warning to those metal fans who liked their genres packaged nearly and tied up with a pretty (if black) bow. It is no exaggeration to claim that bands such as Imperial Triumphant (New York), Pyrrhon (Brooklyn) and Cleric (Philadelphia) wouldn’t exist – or surely wouldn’t resemble the bands they are today – without Krallice, without Diotima, Years Past Matter and Ygg huur (2015).

Mass Cathexis fits into Krallice’s discography perfectly, feeling like a continuation of recent work on Prelapsarian (2016) and Go Be Forgotten. Featuring nine tracks, all tightly wound, with not one getting close to six-minutes in length, the album is being self-released digitally, on CD and cassette by the band, with an edition on vinyl coming later from long-time label collaborator Gilead Media. Looking at the notes for the album before a first listen, it is noteworthy that Dave Edwardson is back, and seemingly being cast as a member of the band – at least for now. Mass Cathexis has not been framed as a collaboration, but here Dave’s name stands, nonetheless. Very exciting indeed.

Krallice’s ninth studio album begins with ‘Feeding on the Blood of Rats’. Once again, we are immediately plunged into the chaotic world in which these musicians delight. The track serves as a wake-up call, quickly reminding the listener of the band’s signature sound. Compared to the previously mentioned bands that owe some not-so-small debt to Krallice, Mass Cathexis and much of the band’s oeuvre isn’t quite as sour as the sounds on which they fixate. Not to say those bands’ records don’t have incredible depth to them (they absolutely do), but due to the different writing style and production choices on display, a listen to this LP requires far more go-arounds before one can firstly appreciate its quality and then, following that, allow the listener the time to delve into quite what is going on.

‘Set’ and ‘The Wheel’ follow, both short tracks that pack in as many ideas as many a black metal group attempt to traverse in an hour. The bass – oh, the bass! – is simply ecstatic on these two. A prime feature of Krallice’s discography, this often unnoticed instrument is the holy grail here, and particularly ‘Set’ is jaw-dropping in execution and recording. Dizzying and with a sumptuous tone despite the dissonance flurrying from its strings, the playing on this record will surely be unsurpassed this year. Makes me wonder if even the great Dave Edwardson when listening back to this record breaks out into a minor sweat of jealousy.

‘Aspherance’ is the longest track on the album, but short when compared to other Krallice epics. No matter. I’ve never really thought of Krallice as creating beautiful tracks. Previous records have inspired, have been awesome in the true sense of the word, and had moments of reverie that evoked brief flashes of beauty, but ‘Aspherance’ and ‘The Myth’ are two tracks that stand out in their discography as songs that have some identifiably gorgeous moments. The technicality still underlies both, as do the gruff, heavy vocals, but there’s something tonally going on between the guitar and bass that creates a resonance that is delightful. The drums, that have so far been frenetic and psychotic, also pair back on these two, still with an air of the frantic, but with moments of respite, and passing calm there, too.

The title track hurls the listener back into the mania. Cathexis (κάθεξις) is a Greek term used in a translation of Freud’s collected works that replaced the German besetzung. Despite criticism of the replacement, the two do mean broadly the same, with cathexis perhaps having a more Platonic use when related to the idea of reserving a great deal of mental and/or emotional energy toward a singular person, object or belief. It’s an extremely interesting concept for which the track and album revolve around. The lyrics seem to point to an almost unnatural cause behind this example of cathexis. “Damaged reasons”, “self-betrayal”, “feelings buried”, “empathy crushed” … leading to “unconscious subversion” and “distorted thoughts” finally ending with the conclusion that the subject of their ire has been “brainwashed”. Contemporary America, no?

‘The Form’ and ‘The Formed’ are clearly a pair, interrelated, a call and answer. Once again Krallice meld their instruments in strange, infernal ways, the machinery of their music twisting and bending to their collective whim. The two tracks form a perilous, winding bridge to the chilling, sparse, instrumental ‘All and Nothing’, that allows Mass Cathexis to trail off in a calming but subtly unsettling way.

Krallice have come back to reclaim their crown in 2020, and although their campaign is in a year of incredible albums, their hands still surely laid on it, if one of many, nonetheless. Mass Cathexis feels like a sum of all that has gone before; the fluidity that came from Prelapsarian, the technical wizardry of Years Past Matter and the sheer ferocity of Loüm are all identifiable in the LP’s bludgeoning forty minutes. The album feels less like an incredible black metal experiment that only some will be privy to and marvel at, but finally a record that despite ceding none of their artistic philosophy can be approached by many more to listen and hopefully appreciate. Structurally the most sound, produced with pinpoint precision as always, and with a run-time that is easily digestible, Mass Cathexis just might be the best album Krallice have released yet.