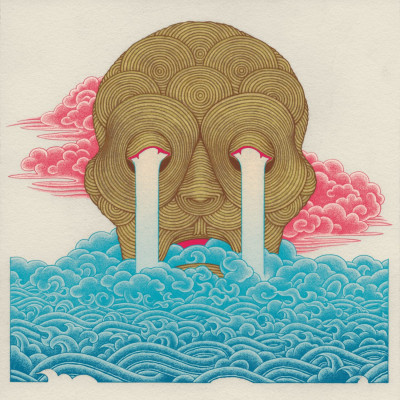 Yet another experimental foray into black metal from the Netherlands, Plague Organ are a project of Rene Aquarius (Dead Neanderthals, Cryptae, and many, many more) and recording engineer Marlon W. A single forty-minute piece, entitled Orphan, is their first horrific offering to our collective ears, courtesy of Sentient Ruin Laboratories.

Being well acquainted with Rene’s other outfits, I knew better to second guess as to what Plague Organ may represent, aside from the fact that I expected a boundary-pushing, experimental take on extreme metal. In that, I was most certainly not wrong. However, this new vehicle still managed to surprise. Orphan may represent his most off-kilter, otherness yet.

Plague Organ embrace all those facets that make those that love black and death metal desire their infamous, warped sounds; those being oppressive atmospheres, labyrinthine arrangements, suffocating rhythm and frenzied, tinnitus-inducing vocals. But more than most I could name, this project also swallows hole the desire to experiment with abstract psychedelia, free-form improvisation and dark ambient soundscapes.

Orphan is, by necessity, a cerebral release and one for aficionados of the extremes of heavy music. I cannot imagine what someone uninitiated in black or death metal would make of this album, or even those with a simple playbook of the forebears of the genre. Plague Organ may achieve a timeless quality with the album, but it also feels like a quintessential 21st century musical project.

The drumming from Rene is at the heart of this deeply curious, peculiar album. Throughout the entire forty minute length, the blast beat remains an impervious, unrelenting constant. Through this, Orphan creates a hypnotic effect, somewhere between a natural high and the beginnings of a headache. Additional flourishes of percussion and an array of droning bass, synths and noise summon a unique aural hallucination. These divergences never finish, they never reach the peak’s zenith or an unholy nadir, they never create a brief structure to hold onto during the sonic tornado – and therein the crux and the tension of Orphan resides.

This full-length is fractal, ever branching and in its form of semi finality and quasi-unfinished state, this imbalance paradoxically brings the album its lynchpin to the listener. The death-metal influenced vocal delivery is perhaps another talisman, another surety that gives those listening – witnessing? – Plague Organ the strength to endure the ravages of its running time.

Orphan is a triumph of fringe extreme metal, of free improvisation and the power one can wield when unconfined, free from points of reference and abandoning the traditional instruments (i.e. guitar) of the genre you continue to inhabit. Completely left-field, avant-garde and unapologetically artistic, Plague Organ have delivered one of the most disquieting and intriguing, unorthodox and innovative releases of 2020. Too unconventional for most, but those willing to submit and submerge themselves into the darkest waters of extreme metal’s borderless hinterland will find much to admire here.