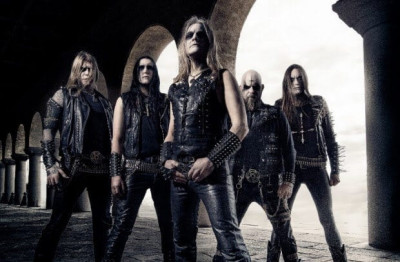 We have received so many great salutations from people around the world and it feels we delivered what we were expected to do. A stronger Necrophobic and a stronger union with the fans.

Necrophobic have just released their new album Dawn Of The Damned, the albums picks up where their last album Mark Of The Necrogram left off and its a punishing mixture of death and black metal in that classic Necrophobic style. Gavin Brown had a chat with Necrophobic vocalist Anders Strokirk to discuss Dawn Of The Damned as well as a look back into the rich metal history of the band.

E&D: Your new album Dawn Of The Damned is out now. How did the creation and recording of the album go?

Anders: After the release of Mark Of The Necrogram, things started to grow for us in terms of more and better gigs and greater response from fans and other people in the scene, along with this the creative atmosphere and the energy to do more came naturally. Sebastian had a strong creative flow and only a few changes along the way in the arrangement of the songs occurred. Since we all know each other very well and all of us knows what to expect from each other and how our sound shall be we didn’t argue at all, it just felt natural to do your part and none of the others had any complaints. We recorded and arranged most of the guitars and bass at home, only drums, vocals and some other stuff where done in the studio, we were very well prepared! With help from Fredrik and his skills in producing a great sound it felt like a straight road to achieve what we wanted.

E&D: What are the themes that the songs on Dawn Of The Damned are about?

Anders: It’s a story of how to develop yourself, when living in this world you are programmed to do this and to think that, when you realize this is not enough and you still questioning a lot of stuff, you come to the frontier of breaking above and to go as far into yourself and in to the dark sides of where you are not supposed to be, to grasp all, go the broad way and let yourself be consumed by that side. Experience all that can makes you become the greater you, to not don’t be afraid of these changes.

E&D: You have just released a video for the song ‘The Infernal Depths Of Eternity’. Can you tell us what the song and the video and their themes?

Anders: This song is about when you make contact and embrace all of the greatness of this side, you become one with the dragon and receive the reward of become the greatest you. We wanted to have a different video that shows this trip and Costin did an amazing job understanding the content, to make an animated video instead of band members in focus gives a better understanding of this theme.

E&D: Can you tell us about the artwork for Dawn Of The Damned. What it depicts and who did the artwork?

Anders: The artwork is painted by Kristian Wåhlin, he also did the art for Darkside and Mark Of The Necrogram. When you look at the Darkside cover there is a red part in the distant and with Mark Of The Necrogram you get a closer look on what this is, it’s the temple on that cover. With Dawn Of The Damned you get to see what’s inside that temple, the portal to this void.

E&D: Do you feel that album artwork is very important to give a visual representation of the music?

Anders: Yes, it has to relate to what you are about to tell and match the atmosphere in the music. The first impact is crucial and you have to keep that feeling all the way so that the listener gets the proper picture and receive the full message.

E&D: What has the feedback on the new material been like so far?

Anders: It has been awesome! We have received so many great salutations from people around the world and it feels we delivered what we were expected to do. A stronger Necrophobic and a stronger union with the fans.

E&D: Will you be hitting the road in support of Dawn Of The Damned as soon as this pandemic eases?

Anders: We long to do so, we want to get out and join for real again, to give the full experience, to share the true essence of this album with our fans, this time of closing and shut down has been devastating, but now we focus more and chat with our fans throughout social media platforms and that gives a close contact instead of meeting at gigs.

E&D: How else have you been keeping busy during the pandemic?

Anders: It has given us more time to focus on videos and other ways of connecting with people, also it has set free time to appreciate, reflect and plan for what we can do instead when we are not on stage, a greater understanding on how to interact more with our fans. We have to keep that in mind when all go back to normal again and also stay on that path.

E&D: What has been the greatest gig or tour that Necrophobic have ever layers me what made it so memorable?

Anders: All gigs and tours have their stories, to see places that you didn’t know existed is the most valuable thing, we have been to Antofogasta, a minetown in Chile, it looked like we landed on Mars, we played in Charkow Ukraine in an old tank factory where they builded the T-34 tanks. Flying to Malta and the plane was hit by at great storm. We been to Russia twice, I recommend Tsar Vodka! To play on the 70000 ton cruise, life at its best! All places have their beauty, the best way is to embrace it all, to grow from what you see and receive from the fans and involved people.

E&D: Do you miss playing live at the moment and what do you miss and don’t miss about being on tour?

Anders: We all miss playing live, that’s when we come out best! The great feeling of going somewhere, to see new places, meet new people and unite with likeminded souls. What I don’t miss is never getting any decent sleep, but that is a small price to pay.

E&D: What Necrophobic song do you love playing live the most?

Anders: All of the songs have their beauty, playing ‘The Nocturnal Silence’ is a great trip back in time and I never get tired of playing this one, the energy you get from the crowd when you announce ‘Tsar Bomba, Blinded By Light’. ‘Enlightened By Darkness’ is also one of my favorites!

E&D: Who are the biggest influences on you as a musician?

Anders: Iron Maiden, their passion for the music and the audience is never failing. I also find great pleasure in smaller bands that give all what they got to do their stuff.

E&D: It has been thirty years since Necrophobic released the Slow Asphyxiation demo. What are your main memories of that time?

Anders: Back then we always hung out with other bands, drinking and went to each others gigs and rehearsals. There was a strong bond within the Stockholm death metal scene, among bands that we hang out often with was Entombed, Dismember, Grave, Unanimated, Therion. Nowadays nobody has time for that kind of commitment for several reasons but when we meet is like time stood still, same bond.

E&D: Did you ever think that you would still be making music after all this time?

Anders: I think is amazing to still be able to do this and when you reflect on the fact that we are here a

E&D: How was the Swedish metal scene when Necrophobic first started and what bands did you look up to?

Anders: Back then there was bands like Candlemass, Agony, Mezzrow and Bathory that ruled the scene. Then death metal become the strongest influence and formed the Necrosound.

E&D: What Swedish metal bands could you recommend to us?

Anders: I would like to recommend Lik, Nazghor and Avslut, excellent bands!

E&D: How did you get into metal and then more extreme forms of it in the first place?

Anders: When I was a kid all you could hear on the radio was Abba and regular pop music, I didn’t like it a all, but then somebody, maybe a bigger brother of a friend played Kiss and Sweet and that music got my blood flow, since then it got more and more into harder stuff like AC/DC, Iron Maiden, Accept etc, and went further on with Venom, slayer, Metallica. It became my main interest to find out more obscure bands. Then in highschool I meet Joakim, David and Stefan who also had this taste, we got along very well, on that road it is.

E&D: What are your favourite metal albums ever?

Anders: Iron Maiden – The Number Of The Beast, Slayer – South Of Heaven, Metallica – Master Of Puppets, Autopsy – Mental Funeral, among others.

E&D: What have been the most memorable moments of your time with Necrophobic so far?

Anders: The recording of the Nocturnal Silence, a great time and start on this journey. The release party of Bloodhymns in Hamburg, I did a guest appearance then and it was a total blast! The first gig reuniting with the boys in Finland Steelfest, the second start. The 70000 ton cruise, it was the first time we played songs from Mark of the Necrogram live. Thanks for the interview!