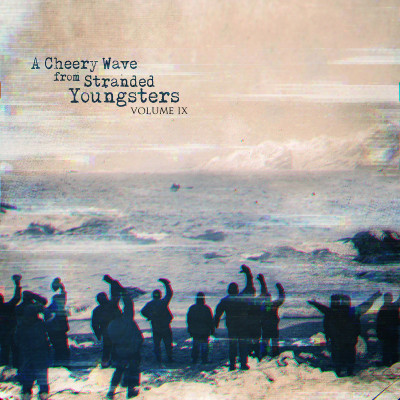 Today (2nd April) sees the release of the ninth A Cheery Wave compilation, and the first to be released physically. The man behind the label is Chris Chapman from post rock stalwarts Flies Are Spies From Hell and we’ve known each other a long time, having spent many drunken evenings inhabiting the same late 2000s London post rock gig scene; so it seemed an apposite time to sit down with him and pop a few questions.

In its own way it was to bring the scene together a bit, and connect bands up with each other. There were fewer post-rock bands then (2010), and everyone wasn’t as linked-up online as they are now. It was exciting whenever you came across a band doing a similar thing to you. My band hadn’t even heard of the term post-rock when we started in the mid-2000’s – there wasn’t that solid scene that you get with more established genres.

There were other things going on too of course. Nice Weather For Airstrikes Festival (run by members of VLMV and Poly-Math) was bringing the scene together, cramming bands into a little pub in Brighton – lots of which ended up on Cheery Wave albums.

So, it was doing its bit for coalescing the scene which was happening in lots of other ways in the country at the time, but which felt a lot different than it does today.

(((o))): You’ve been doing it a really long time, nearly as long as we’ve been doing Echoes & Dust, how have you kept the enthusiasm for it going?

Yeah, you guys have been doing it a while too! Great to see people sticking around. This fresh enthusiasm to move from only digital compilations to a full label probably came from a renewed love for physical music. I’ve never stopped buying physical music myself, but for whatever reason I started buying loads in the last year. We are lucky to still have some wonderful record shops in London and I started going mad on Discogs too. I get a kick out of a beautiful album in a beautiful package. I especially enjoy it if it’s hard to find or not at all online – it’s a lovely inconvenience to me for an album I love to not be on Spotify.

(((o))): The new (9th) installment is the first to be released on physical media. What made you decide to do that? It must be quite a step change in complexity?

As well as being lovely objects to use, physical albums can mark a moment in time that digital cannot do. By bringing back the memories and feelings of when and where you first held a particular record they add another layer of emotion. They add more to your relationship with that music. I’ve still got tapes I made as a kid and they take me right back. Also, I’m a bit old fashioned I suppose but I kind of feel that an album isn’t really out if you can’t hold it. I think this is the first post-rock compilation to be released on cassette so that’s pretty exciting too. Perhaps your readers will correct me – and then I’d certainly have to buy it for myself – but I haven’t found one yet.

(((o))): It also only features bands that have split up, which is a great idea, but what made you focus on that?

I think during the lockdowns of the past year my mind spent a lot of time looking back – thinking about the past perhaps because the future was uncertain. So, it was a natural state of mind to be searching out bands that have gone. Some were quite hard to track down… some I never managed…

Also, it makes me quite sad to think that once a band has split-up they are forgotten about. Not to say these bands have been by their fans, but it’s just another way to keep them alive and introduce them to new people.

(((o))): With Mogwai having recently reached number 1 in the charts & new albums by Godspeed & other luminaries of the scene imminent, it’s shaping up to be a banner year for post rock; is that a (cheery) wave you hope to catch with this release? (sorry 😉 )

The Godspeed live-stream was pretty wonderful wasn’t it? It’s nice to see a band like Mogwai do well, for sure. I haven’t followed the charts in decades though. They include streaming figures now don’t they? That doesn’t make much sense to me. The Christmas number 1 is always a man singing about sausages nowadays isn’t it?

(((o))): With that in mind, how do you view the health of the current post rock scene generally?

There seems to be tons of bands now, and many more labels too. We’ll all stagger blinking into the sunlight when live music returns, and there will be lots of post-rock friendly festivals to go to then – ArcTanGent, Portals, Strangeforms, Dunk! – to name a few. It’s a good time to be a post-rock fan.

(((o))): With the pandemic restrictions (hopefully) losenning later this year & gigs possibly happening, what would be your dream post rock gig line up to celebrate the return of live music?

And then 65daysofstatic playing a two-hour version of Tiger Girl so we can all have a boogie afterwards.

Shall we make some calls!?

(((o))): What are the future plans for Cheery Wave & anything else you want to tell us?

A Cheery Wave: Vol X should be out this year – featuring living bands. Happy to hear from any post-rock bands reading this for that. And keep an eye out for our first non-compilation release. We don’t know who that will be yet but lots of bands are coming forward so we’ll see what feels right.