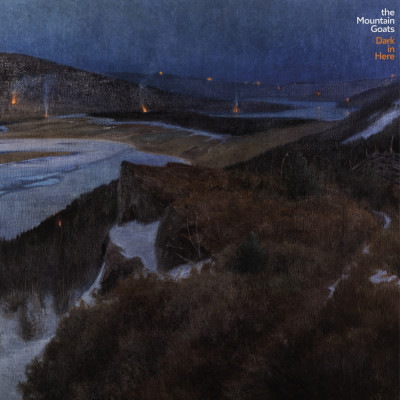 Dark in Here by The Mountain Goats

John Darnelle and The Mountain Goats are one of those acts that leave no middle ground, either with their music or among their potential audience. Either you love them and grab everything they come up with the instant it is released or you skip around it in big circles.

But even those whom you can call big doubters, are aware of the fact that Darnelle and the band are among the more imaginative artists around, never standing in one place, either with their music or lyrical content they bring along.

To that effect, The Mountain Goats latest, Dark in Here bustles with musical inventiveness and lyrical imagination as it always has so far. But here, they go one step further, they add a sound polish that accentuates all the best elements of their artistry even further.

Possibly part of that lies in the fact that they recorded this album at the Fame Studios, the Muscle Shoals institution that many dubbed ‘the heart of Southern soul.

And yes, the sound has that soulful feel that legends like Spooner Oldham and Will McFarlane bring along, but Dark in Here is still the essential The Mountain Goats Album with all the intricate musical changes and Darnelle’s shifting lyrical imagery that is always present.

In many ways, it is The Mountain Goats album that even those listeners who are not keen on the band could warm up to, without alienating one single staunch follower around. And there are quite a few of those. And for a good reason.