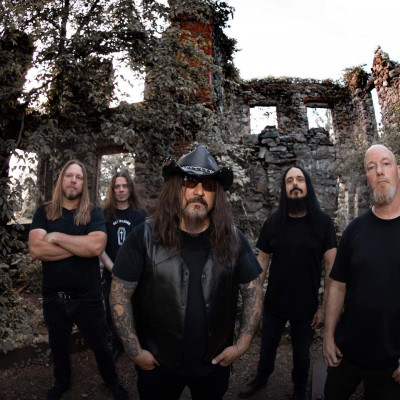 A Pale Horse Named Death on the web:
Website | Bandcamp |

When I listen to the new album I buzz with emotion and energy as if I am reliving the feelings I had writing the songs at first. Sometimes my own lyrics make me tear up in emotion that's how strong the words are at times for me.

New York’s A Pale Horse Named Death have always embraced darkness with their music and on their latest album Infernum In Terra, they delve even further into the realms of a dark abyss with plenty of emotional turmoil and misery in the songs on the record but done in a way that unleashed fresh territory for the band. Gavin Brown caught up with A Pale Horse Named Death guitarist/vocalist Sal Abruscato to hear all about Infernum In Terra and what inspired the album plus discussing a variety of subjects relating to the band from touring to their new lineup as well as his time in Type O Negative.

E&D: Your new album Infernum In Terra is out now. Are you excited about getting the album out there?

Sal: I am absolutely proud to release this new album, I consider myself fortunate everytime I release new music. It is a labour of love for me to release new songs to the world.

E&D: How did the recording and creation of the album go?

Sal: Pretty much the same I record all the instruments accept the guitar solos, I started working on it when the pandemic started in March 2020 and then took a break in the summer and resumed in the fall of 2020. I was done a year later in March 2021 and we mastered and delivered in March 2021.

E&D: The album was recorded during the isolation pandemic, did this have a big impact to how the songs were made?

Sal: Pandemic or no pandemic I write mostly depressing stuff, it gave me the leisure of taking my time and not worrying about the band or shows. I would do some sketching then walk away come back a month later and do some more with no pressure. Pressure usually ruins songs and rushing ruins them too. Of course the grim reality of the virus did influence the already apocalyptic approach I have so it worked in my favour.

E&D: You’ve released the tracks ‘Believe In Something (You Are Lost)’ and ‘Shards Of Glass’ so far, how has the new material been received so far?

Sal: So far I am pleased with the reception of the new music. People seem to dig it a lot which makes me very happy with the results. People can be fickle and you never know if something will work out in your favour, but so far I am stoked about it and glad fans are enjoying it.

E&D: With dark tracks like ‘Believe In Something (You Are Lost)’, ‘Reflections Of The Dead’ and ‘Souls In The Abyss’ in particular on the album, do you feel that this is the darkest album you have made to date and was that your intention with this record from the start?

Sal: Yes it is the darkest to date for me, I have been leaning in that direction with every song I write, definitely more content about Lucifer and God. I knew in my head that I wanted to push the envelope a bit more from the start, to make it as dark as possible with the same signature sound and catchy melodies. The darkness comes to me naturally and I enjoy the shock it creates for the lambs of the earth.

E&D: Do you find hope amongst the darkness with these songs though?

Sal: Well I believe to have Light you need darkness, to have a god you need the devil, to have the ying you need the yang. It’s how the universe works, it is how we have balance on earth. It helps me push out my demons and bad thoughts in a safe creative manner

E&D: Was it a cathartic experience making this record?

Sal: Absolutely, creating music has always been a form of therapy and release for me, it helps me release my emotions in a creative way and when I listen back it is exhilarating to hear the results. When I listen to the new album I buzz with emotion and energy as if I am reliving the feelings I had writing the songs at first. Sometimes my own lyrics make me tear up in emotion that’s how strong the words are at times for me.

E&D: A Pale Horse Named Death have a new rhythm section in drummer Chris Hamilton and drummer Oddie McLaughlin. How are they fitting in with the band?

Sal: So far so good, It’s all very new we have only jammed 3-4 times, very complicated as some members have concerns with the virus or scheduling can be difficult with everyone’s personal lives. I am not worried about it time is on my side and it will fall into place when its right.

E&D: Can you tell us a a bit about what the albums title means and the cover artwork for the album?

Sal: When I was putting ideas together I wanted to use the word hell being that we were approaching the 10th anniversary of our debut release And Hell Will Follow Me along with the pandemic that came along it seemed perfect to say that it was ‘Hell On Earth’, but it seemed predictable to me so I translated it into Latin and we came up with ‘Infernum In Terra’, which struck me as the perfect title so when I started working with Kelvin Doran and gave him the title he instantly saw this great vision for the album cover. I was blown away when I saw the sketch and knew it was gonna be killer. Such a biblical yet satanic scene and atmosphere on the cover that brought the two worlds together as one. I am really happy we worked with someone new for the fourth album, everything happens for a reason and sometimes you need to change and evolve.

E&D: A Pale Horse Named Death are now on your fourth record with this album. How do you feel that the band has evolved and grown since you first started?

Sal: I believe it has evolved the way it should, not too extreme with changes yet adding new layers of ideas on every album. For me it was a great step forward from the previous album as I was unsatisfied with the end result of the production and sound. I learned an important lesson and that is I will always handle the production, mixing and engineering of every album like I did on Infernum In Terra, which sounds amazing compared to the last album, thats what its all about, learning and moving forward to do better.

E&D: The band’s first album And Hell Will Follow Me was released ten years ago, what are your memories of that time and when the band was first starting?

Sal: It all started out as a studio project, never intended to be a band. Me and Matt Brown made the album in my house, Matt who is an incredible guitarist, engineer and producer did the first and second albums with me and was in the band till 2017, we had some guest appearances from various musicians like Bobby Hambel of Biohazard do some guitar solos and it was also during that recording that Peter Steele passed away. I am very glad we did that album it was a big learning lesson for me as a singer and writer. I wrote some of the best songs on that album.

E&D: Have you got any plans for touring the new album when things start opening up a bit?

Sal: We shall see at the moment it looks like we are going backwards, maybe summer of 2022 if possible for us all. This pandemic has changed it all for good I feel.

E&D: What have been some of the most memorable gigs that A Pale Horse Named Death have played to date?

Sal: Definitely, I would say Wacken Festival in 2014 and Damnation Festival in Leeds 2019. I enjoy intimate shows but I also love big festivals. I can only hope to do more in the future.

E&D: Do you look back at your time with Type O Negative with fondness and what were some of the highlights?

Sal: I do sometimes, for me it was making those incredible albums that I was a part of, I would have never thought Bloody Kisses would have gone Platinum over the years and become such an influence in the metal world.

E&D: Did you find it a comfortable task moving from being a drummer into a vocalist/guitarist at all?

Sal: It was a bit challenging at first singing on stage and playing guitar, at the same time it was exciting to be in front.I love playing drums and even though I may not be doing it at the moment, maybe one day for the right group I would consider laying some beats down, for me its all self expression and I enjoy it all.

E&D: Who are some of your influences as a singer, guitarist and drummer?

E&D: What have been some of the highlights of your music career to date?

Sal: Touring with Ozzy Osbourne in ’96, Having dinner with Geezer Butler, Jamming with Metallica in 2004 at the DownLoad Festival and A Pale Horse Named Death touring with Danzig in 2013.