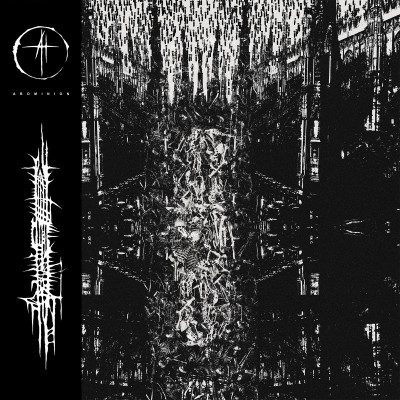 “And starward drifts the stricken world, lone in unalterable gloom, dead, with a universe for tomb, dark, and to vaster darkness whirled.” George Sterling’s poetic verse is proudly displayed on the Bandcamp page of Oakland-based blackened doomsters Abstracter. A more fitting verse would be hard to find to describe a band immersed in the suffocating shroud of worldly misery.

The entity known as Abstracter has taken on various forms over the years and shifted their sound ever so slightly with each release, but never straying away from the dripping black, light-devouring doom they play so well. You could say Abstracter’s evolution from their humble beginnings in sludgy post-metal into this crushing death/doom style has been reflective of the decaying, declining world around us. Like apocalyptic survivors with no choice but to kit up for death and ride into the poison storm.

New album Abominion comes crawling from the dreaded, pestilent slime of our parasitic existence in the horrifying shape of forty minutes and five unforgiving tracks of all-consuming, impenetrable darkness. If it’s not already evident by the sad chaos surrounding us as maggots, Abstracter do a thorough job of hammering it home right through our drooling faces. Tracks like ‘Warhead Twilight’ and ‘Abyss Above’ are densely claustrophobic, packed with swirling atmospheres, volatile blastbeat outbursts and thick with the unbearable weight of self-destruction. Squint and take a deep look into the black and white cover art whilst playing the album at full volume and those tiny bombs dropping on a mass grave of skeletal remains becomes a more vivid reality as you sink into the doom-laden abyss clawing at your inevitably fucked soul.

Abstracter aren’t afraid to take it slow in place of all-out brutality, instead drenching you in viscous, palpable despair where every agonising and drawn-out guitar strike or stern drum hit clogs your pores with abandonment, fear and meaninglessness. ‘Tenebrae’ is one such track that sucks the life from you whilst still being able to captivate you with its chasmic darkness and sheer menace. The piercing dissonance beneath this track crawls from the gutter and feeds your soul all the wickedness it craves. Vocals are on-point, terrifyingly bleak and stygian with some utterly monstrous moments bellowing through the colossal blackness.

These five cavernous monstrosities take on a similar flow, melting into one lump of death-spewing, abstract blackened doom replete with churning, avant-garde chaos and crawling, bleak despair. You’ll either purge the black bile from your stomach with a hefty, vomitus scream or walk off a cliff and end the suffering. Either way Abominion is as wretched and as darkly, dissonantly wicked as doom metal comes. Abstracter tighten the noose of existence as every note squeezes at your soul like a boa constrictor.