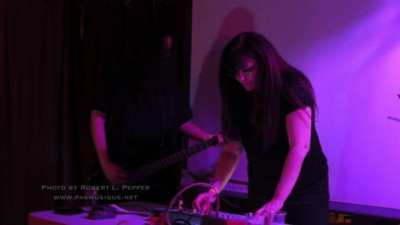 I had these thoughts of what would Obituary and The Cocteau Twins sound like meshed together? Or Crowbar and The Sisters Of Mercy? I think it’s these ideas and thoughts that helped us not become stagnant and sound like every dark ambient, industrial or gothic doom band.

Tribes of Medusa are a Brooklyn-based, husband and wife duo who create dark ambient/doom/goth metal music. They formed in 2009 and haven’t looked back since. With an impressive discography to date, Adriana thought it was time to catch up with the duo and find out more about their music, what led them to making music together and more.

(((o))) Can you tell us how Tribes of Medusa was formed and how you decided on the band name?

Thomas Zmuda: I was trying to form bands in Brooklyn and or join already established bands. For some reason or another it would never work out. I was always fascinated by the idea of 1 or 2 people bands, (Bathory, Mortiis, Godflesh, etc.) I decided to give it a try on my own. I think the hardest aspect of this was finding a band name. Something that could change if the band changed, I remember I was reading an old espionage novel and the name of this secret society was called Medusans. This tied into a painting a friend of ours did and it was called “Tribal Medusa”. So I just worked it out until it became Tribes Of Medusa.

(((o))) Being both partners in life and in music, do you find the dynamics between the two realms easier/free-flowing when it comes to writing music?

Thomas Zmuda: Absolutely, usually I will work out a guitar riff or drum pattern and Andrea will help expand on it saying what could be added or taken away. I think musically we have the relationship of me being the composer and she being the arranger. In the beginning nothing was “you must be in this role” it is free flowing as you said above.

(((o))) How did you get started in music and when did you first learn to play your instrument(s)? What was the first instrument you learned to play?

Thomas Zmuda: My Mom is a music fanatic, I remember the radio being on as a kid. She would buy cassettes from The Police, Culture Club, Madonna and of course play her British Invasion bands from the 60’s. I think from early on this gave me a good foundation that good music can be in various styles.

When did I first learn instruments? At 42 haha, seriously though when I was 12 I had a dear friend who just showed me basic chords and power chords. Back in the 90s I was always relegated to playing bass in local garage bands, so I took lessons and it fizzled out due to the instructor being too busy. I moved on to guitar and it was an on again off again process. I was buying books in hopes of gaining some insight or knowledge. Finally, at 42 I took lessons with a great guitarist Kevin Hufnagel (Gorguts, Sabbath Assembly), he unlocked so many “doors” that were blocking me. He explained theory, intervals in such an easy manner. I am eternally grateful.

(((o))) What and/or who influenced you to start playing music?

Thomas Zmuda: It’s a little bit of the above having my Mom with her music playing and Dad letting me rent the VHS of Iron Maiden from the local store at 8 years old. Watching Video Pieces was a game changer. Seeing these guys with long hair playing rhythmic music just made me say I want to do this too. Time went on then it was my friends and I getting into Metallica, Slayer, all the thrashy stuff. I switched high schools and got into death metal and again more influences (Death, Obituary, Morbid Angel, Entombed, Carcass, Napalm Death, etc.) I met some like-minded people and formed some garage bands. By the time I was 17 or 18 I got into the whole Scandinavian black metal stuff it was there I noticed a lot of the one man bands. I realized music can be done with just one or two people.

(((o))) What got you into playing dark ambient industrial gothic doom music?

Thomas Zmuda: So this is a combination of the above. I loved the soundscapes of what Scandinavian artists were doing but I also got into industrial and gothic stuff in my 20’s. I was always curious if anyone was doing something as you described. I had these thoughts of what would Obituary and The Cocteau Twins sound like meshed together? Or Crowbar and The Sisters Of Mercy? I think it’s these ideas and thoughts that helped us not become stagnant and sound like every dark ambient, industrial or gothic doom band

(((o))) Can you tell us what the experimental scene is like in Brooklyn?

Thomas Zmuda: This is a bit of a tricky question as we are hermits for the most part. One of our friends Robert Pepper has been putting on experimental shows for years. The show he is curating now is called Ambient Chaos. Aside from that, I really don’t know what is going on in Brooklyn musically.

(((o))) Last year you collaborated with UK-based cellist and composer Jo Quail on your October 2020 release titled Patriarch. How did that collaboration come about and what was the process like collaborating from afar?

Thomas Zmuda: We have known Jo since 2011, I remember hearing about her through the underground promoters in London called Chaos Theory. We went to YouTube and saw the video for ‘The Falconer’ and were amazed by Jo making the cello sound otherworldly. So I sent a message and she wrote back and a friendship was started. I always asked if she would be able to do a collaboration, she said yes. I always felt on our end it needed to be something with such importance. My father unfortunately passed in early 2019 and during my grief I was slowly writing ‘Patriarch’, something to put all the anger and sadness into. I asked Jo could she send a few tracks after I fully recorded one song. She sent a few ideas. I asked would it be ok to use the extra tracks throughout the album? She gave us her blessing. The end result was a complete success in my opinion.

(((o))) On July 25th, you release a two-track EP titled Asylum. In under 10 minutes, you manage to deliver a powerful wall of sound, which leaves the listener both satisfied yet wanting more. Can you tell us about this release and the process behind putting it all together?

Thomas Zmuda: I had these tracks written in a very basic form. I started with some simple chords and just let it sit for a while. In March 2020 out of nowhere I lost hearing in my right ear. I was thinking, could I still do guitar, should I switch instruments? Giving up music was not an option. So I started listening to music that I could hear clearly and find out what they are tuned to. I got back to guitar and basically it was a relearning process, it became a matter of what I could hear not so much what is technically correct. So once I felt comfortable we got back to recording and just added to the basic forms of the Asylum EP. There was a lot of asking Andrea does this sound right? She had to help me “hear” some things. The one major technical aspect was the EQ to make sure I could hear it clearly.

(((o))) Your sound is complex and full. One could never tell that Tribes of Medusa are a duo. Looking at your setups, what would you say helps you in achieving your rich and full sound?

Thomas Zmuda: I wish I could say I had a ton of pedals and gear lying around but living in NYC you have to be mindful of your neighbors. So we use virtual guitar amps and pedals. It is kind of cool in a way because you can test out sounds without having to commit to an actual piece of hardware. How we achieve our sound, it’s really simple, just stack the bass and guitar tracks and use reverb, even on the drums. We also pan the bass and guitar to give each instrument space. Sometimes you have to find a happy medium or you will not be able to hear a thing with all the reverb and distortion going on.

Thomas Zmuda: We will always keep recording and releasing material, maybe some collaborations. We are open to playing live if we get an offer. Just to keep progressing musically, no limitations.

(((o))) Lastly, what are your top three places in Brooklyn to catch a show?

Thomas Zmuda: This is an easy one haha, Saint Vitus, Lucky 13 Saloon. Not Brooklyn but Manhattan The Gramercy Theater.