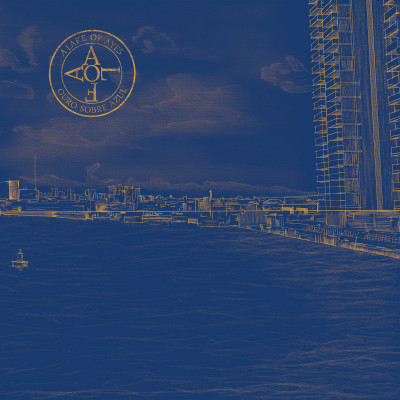 Ouro Sobre Azul by A Lake Of Ayes

Adding its name to the wealthy UK roster of post-metal comes Manchester quarter A Lake of Ayes with debut release Ouro Sobre Azul. The five tracks here all offer variation from each other but stick to a theme of long form creations which traverse the worlds of heavier post-rock as well as rapturous post-metal riffage. If in need of an album of beautifully rich heavy music, look no further.

Post-rock stylings are evident around many of the tracks as the guitars interact and build on the solid rhythm section to allow for massive post-metal crescendos. Whilst that’s a very generic sentence it’s impossible not to find something enjoyable here for even the most hardened of listeners of those genres as there is an excellent mix of directions and a solid continuity running throughout.

An example of this is through the sparse use of vocals, ‘Preserve’ begins with post-rock intertwined guitars before it crescendos in a rolling wave of brief screams and post-metal battering. Similarly ‘Tell Schrödinger I’m Alive’ has impressive vocal outbursts, including clean vocals as well as screams and spends the duration traversing solidly post-metal realms. The tracks elsewhere remain mainly instrumental but with no lack of impact. ‘Attack Ships On Fire’ has hints of Russian Circles in its crunching quiet/loud transitions and further shows the band’s ability to have influence without plagiarism.

Ouro Sobre Azul hasn’t reinvented the wheel but neither has it put the same old tyres on the waggon. What is offered up are five excellent songs which work through genre definitions whilst still fitting together to make a great collection of really enjoyable post-metal and there is so much here to enthuse any fan of the genre.

CD available via the band with cassette and digital from Ripcord Records.