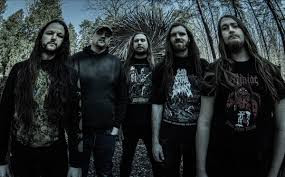 Border World is our first release with Prosthetic, so that alone is exciting. It showcases where we left off with our first full length Into the Azure and what direction the music is going in, moving forward.

Melodic black metal band Volcandra have just released their latest EP Border World and it demonstrates the musical direction the band are going in. Gavin Brown caught up with Volcandra vocalist Dave Palenske, who tells us all about Border World and its lyrical themes as well as the band’s vast video games, science fiction and black metal inspirations.

E&D: Your new EP Border World is out now. Are you excited to be getting it out there?

Dave: Absolutely. Border World is our first release with Prosthetic, so that alone is exciting. It showcases where we left off with our first full length Into the Azure and what direction the music is going in, moving forward. I think it will be a great  introduction to the band for new listeners.

E&D: What does the title of the EP refer to and can you tell us about the artwork?

Dave: Border World is a reference to Xen, which is an area in the game Half Life. In the game, a rift is opened due to an experiment gone wrong, causing hostile alien creatures to pour into the world we know. The game’s protagonist Gordon Freeman must travel through a portal to enter Xen, which is equally beautiful as it is deadly. The second track on the EP Resonance Cascade is inspired by the events that take place in Half Life. I thought ‘Border World’ would be a cool title not only because it’s a reference to that track, but also because this release signifies the band entering a new stage in our career, much like how Gordon Freeman enters a new world in the game. The artwork, by the endlessly talented Varises Otak, depicts an area of Xen that I found to be captivating. The art kind of encompasses the sense of wonder I would like our music to instill in people.

E&D: Is the opening track ‘Tallon IV’ a reference to the Metroid video game and what is that track about?

Dave: It is! The track follows the tale of Samus Aran as she ventures through the varying terrains of the planet Tallon IV. The song’s relentless nature was perfect to tell such a harrowing story over.

E&D: You must be big video games fans, what are some of your favourites?

Dave: We are. Collectively some of our top picks would be the Diablo series, World of Warcraft, Dark Souls, Doom, Quake, Zelda and of course the aforementioned Half Life and Metroid series.

E&D: If you could make your own Volcandra video game, how would that go?

Dave: It would definitely be some super epic RPG with first person shooter elements that would require you to sacrifice any social life whatsoever to make progress. Giant monsters, robots and aliens would be in abundance.

E&D: There is also a big science fiction vibe about this EP. Is that something you’ve wanted to expand upon?

Dave: Yeah. Two of the songs are heavy on the sci-fi elements, and the other two are more fantasy inspired. At the end of the day I don’t want to write about the real world or politics in this band. I’ve always found Volcandra’s music to be kind of dream-like. The lyrics need to reflect that. I like the idea of music creating an escape of sorts for the listener. You can always expect that from this band.

E&D: Are all the members of the band big sci-fi fans and what are some of your favourite pieces of sci-fi, be it films/books etc?

Dave: We’re all nerds. I myself am a huge fan of Japanese science fiction and fantasy like Godzilla, Ultraman or Gamera. Our bassist Dyer is a huge Star Trek fan, and one of our guitarists, Jamie, is really into Star Wars, especially the books.

E&D: What are the rest of the songs on the EP about and do they follow a theme throughout?

Dave: As I mentioned earlier ‘Tallon IV’ is Metroid inspired, ‘Resonance Cascade’ draws from the Half Life games. The last two tracks ‘Colossi’ and ‘Guardian’ are based on some masterpieces by game developer studio Team Ico. If you know who they are, then you’ll know exactly what those songs are about. If not, I’ll leave those for people to figure out. But for this release, each song is based off of a different game.

E&D: Is Border World a good indication of where the music of Volcandra is heading?

Dave: Totally. I think this release is an easily digestible sample of what this band has to offer. I hope people who like Border World check out our previous album Into the Azure, (which admittedly got stunted by the pandemic) and our next one, which we’re in the middle of writing. The next record will be a concept album from start to finish.

E&D: Where else would you like to take the music of Volcandra in the future?

Dave: I think we’re mostly interested in meshing different sub genres that we all like. We don’t want to limit ourselves to just playing black metal. There are already elements of thrash and death metal in our music. I would like to retain the sound people already know us for, but continue to broaden those horizons and keep people guessing what we’re going to do next.

E&D: How has the new material been received so far?

Dave: Very well! We’re a fairly new band, so it’s always interesting to see how people react. There’s very little bias in peoples’ opinions that way. But so far, people seem to be on board.

E&D: Did you always plan to bring out an EP at this stage of your career?

Dave: We were planning an EP release a little over a year ago, mainly to shop it around. Ironically Prosthetic was ready to offer us a deal after we put our first album out in 2020. Coming to them with a finished EP was kind of an added bonus on top of releases we will be putting out with the label in the future.

E&D: Have you had any plans about a full length follow up to your debut album Into The Azure that you can tell us about?

Dave: We’re knee deep in the writing process and very excited about what we have so far. We’ll be hitting the studio to record as soon as it’s ready.

E&D: How did black metal first enter your life and what was your first exposure to the music?

Dave: I had a couple friends in middle school who would introduce me to tons of bands and albums I had never heard before. One of them made me a copy of Dimmu Borgir’s Death Cult Armageddon. I think that might’ve been the first black metal album I ever heard.

E&D: What are your all time favourite black metal albums?

E&D: What album would you give to someone who was just getting black metal?

E&D: How is the black metal scene in the US at the moment and what newer bands would you recommend to check out?

Dave: There are some bands that really stick out to me like Stormruler (I actually filled in for them on guitar on this year’s Devastation on the Nation Tour), Wolves in the Throne Room, Mutilation Rites, Oubliette, Stormkeep, and Tómarúm (Prosthetic label mates).

E&D: What bands and albums are the best examples of USBM in your opinion?

E&D: Are you looking forward to going on tour in September?

Dave: Totally. We’ll be hitting some areas in the East Coast that we have yet to travel to, and we’re playing RPM Fest in Massachusetts. It should be a blast.

E&D: Do you plan on playing much new material on the tour?

Dave: We will more than likely be playing all of the tracks from Border World every night, as well as some of our favorites from Into the Azure.

E&D: Have you got further tours planned after that, hopefully touring the UK and Europe?

Dave: Once we release our next full length we plan to go anywhere and everywhere possible.

E&D: What have been some of the most memorable gigs that you’ve played so far?

Dave: In Volcandra, there was a date in Cincinnati, OH where we opened for Embalmer that was especially sick. Playing Little Harpeth Brewing in Nashville, TN was excellent, and Shroud of the Extreme Fest. All bangers. Oh, there was also a Halloween show we did where we all dressed up in Jimmy Buffett Margaritaville attire. We gave the crowd leis and beach balls to throw around during the set. Way too much fun.

E&D: What have been some of the highlights of your time with Volcandra so far?

Dave: Any time the five of us are in a room together is a blast. I love the writing process with this band, and seeing the songs grow into their final form. This is also the first band I’ve fronted where I haven’t also been playing guitar, so when I write lyrics I go all out. Performing live only on vocal duty is very freeing and loads of fun.

E&D: What do you still want to achieve with the band in the future?

Dave: I would love to travel all over the country, and any other part of the world we can make it to. For each consecutive release I want to push the boundaries of our music and see it progress and mature into something bigger and better every time.