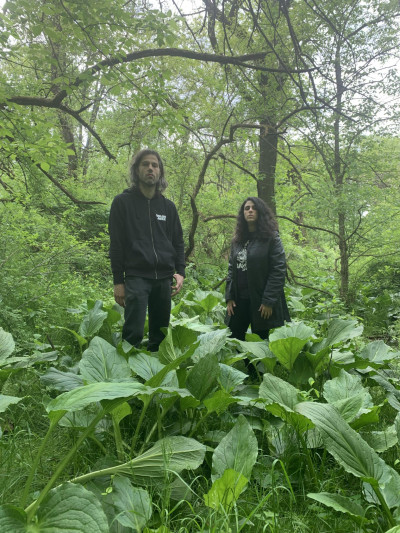 We dug into our histories, the injustices of the present moment, and all matters of subconscious unrest to put together the ideas that became Escape Velocity.

Philadelphia-based instrumental/progressive post-doom metal duo Sarattma are just about to release their debut album Escape Velocity, through Nefarious Industries, and the follow up to 2017’s Inner Space EP is a hypnotic musical experience that takes you an a journey through a psychedelic and apocalyptic experience.

Gavin Brown caught up with both members of the band and they told us what the album is all about. Sara tells us “Escape Velocity posits illness and pain as an alien invasion of the body. Much of the album was written and recorded while my mother was in her last year of life, battling stage 4 ovarian cancer. She began making collages which combined invasive tumors and nature imagery, overlaying the two in grotesque juxtaposition. These themes influenced the notes we gave to Caroline Harrison in designing the album art, with bodily matter sort of fungally taking over the terrain. My mom’s journey with cancer, and the way in which she made art inspired by her illness, made a huge impression on me, also in terms of how I relate to my own body, mortality, sickness, and the power of music. Working on this album, especially developing material in the basement of my mother’s home while she listened and painted, really felt like one of the only beacons of relief and hope during an otherwise dismal and hopeless time, and she was always extremely present in the process, giving us feedback and coloring the whole experience with a different sort of life. We dug into our histories, the injustices of the present moment, and all matters of subconscious unrest to put together the ideas that became Escape Velocity.”

Matt adds “Escape Velocity represents many things to me personally. As Sara has already said, it was profound that Jill was present and listening deeply during many of the improvisations at Sara’s house that led to the seeds that would become the full record. The theme that time is truly precious and must be used to the fullest that one is able to, became a theme that resonated throughout the project. This was also the first record that I made a goal to complete by doing everything DIY – with only certain aspects outsourced to studios when there was no other option, but mainly the process being a dirty sweaty journey in a basement in July. I fondly remember the first nine hours of troubleshooting the first day just to start recording, putting our heads physically forward while playing so that both our monitor headphones would reach the tiny behringer mixer. All sorts of amateur sweaty DIY warrior-like stuff to make it happen anyway we could. All these dynamics, combined with lack of firm arrangements or plan going into the recording process lead to something that sounds spontaneous, natural and in the spirit of existential resilience and gratitude.”

Echoes and Dust is proud to present an exclusive album premiere of Escape Velocity, which you can find below.

Escape Velocity will be released digitally and on LP in a run of 250 copies on black vinyl on August 12th.

Preorder/presave options are posted at the Nefarious Industries shop here.