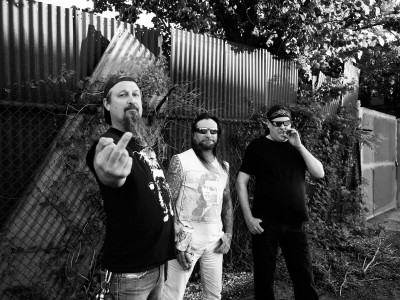 We don’t like “normal” things, and that includes music, so we just do what we do. If it makes someone sick, then that’s cool I guess.

Purveyors of some of the filthiest metal music to be released in the past decade, Bones are back with their new album, the aptly titled Vomit in which they spew forth an array of murderous metal over the albums duration. Gavin Brown caught up with Bones vocalist/bassist Jon Necromancer, who tells us all about Vomit and its creation as well as all manner of sleaze, wild gigs and the metal scene in Chicago.

E&D: Your new album Vomit is out next month. How excited are you to be realising an album again?

Jon: We’re pretty stoked!  It’s taken forever. We started recording in 2020, and the pandemic slowed things down since most studios were shut down for a while, but we finally got started in October of 2020 and it’s taken this long to get things finished, artwork, and most importantly a new label in Disorder Design.

E&D: Was making the album a smooth process at all?

Jon: This time around it was difficult, but not with the music. The songs came together easily enough. We’ve been in different bands off and on together for almost 30 years, so the songwriting process is pretty straightforward. We all know what to do. It was everything else that was a challenge, but we figured it out and we feel good that it’s finally being released. I know everyone says this, but we really think it’s our best work so far.

E&D: The album ends with a cover of ‘She’s The Woman’ by Van Halen. What made you choose that song to end the album with?

Jon: At rehearsal we’re usually fucking around with a cover song, but just for fun. We’ll get loaded and Joe will play a Black Sabbath beat and we’ll play a Sabbath song for awhile or something. Just fucking around for fun, but for some reason we always wanted to do a Van Halen song, but it’s hard because some (most) of them are kind of too commercial. We’d been talking about it for years. Finally we started getting into ‘She’s The Woman’ and it’s just fun as hell to play, but HARD! Van Halen is a difficult band to cover. The plan was to record it just for us while we were in the studio, and not to release it. But 2 days after we recorded it Eddie died, so we threw on at the end as a stupid kind of tribute. We’re Van Halen fans, so whatcha gonna do? Cheers to our brother, Nick Hernandez (Heaven’s Decay, Dysphoria, Stone Magnum, and others), for coming out on short notice and singing this one. There’s no way any of us could’ve done it.

E&D: You’ve also covered songs by Terrorizer and Devastation in the past. What bands/songs would you love to give the Bones treatment to in the future?

Jon: Who knows?!? We practice twice a week, for 2-3 hours each time. Sometimes we just want to stretch out and play something for fun and one of us will play another band’s riff or drumbeat and we’ll mess around. Usually we’re so stoned that we just laugh and move on, but every once and while something sounds pretty good, so who can tell?

E&D: What is most likely to make you vomit at the moment?

E&D: Your second album is famously titled Sons Of Sleaze. Are you happy look unto keep the sleaze flag flying today?

Jon: Honestly? I mean, I don’t give a fuck about flying any flag, but the three of us are kind of like these weird scumbags. We don’t like “normal” things, and that includes music, so we just do what we do. If it makes someone sick, then that’s cool I guess.

E&D: Have you ever had any backlash to your songs/lyrics especially in such an easily offended world that exists today, especially online?

Jon: Nah. We’re underground, man. No one knows who we are. No one really listens that hard to the lyrics or whatever with us, so I’ve never heard any bullshit like that, and I honestly don’t know what anyone would be offended about. If a song about puke offends you, then listen to music on the radio with the rest of the dorks.

E&D: Do you feel that metal has lost some of its shock value today?

Jon: Yes, but I’ve been been listening to it for a long time so it’s hard to be surprised anymore.

E&D: What are the sleaziest metal albums ever recorded?

Jon: GG Allin was pretty fucking sleazy with a capital “S”. Oops, that’s not metal. There was a band from Chicago called Scepter back in the 90s. Their albums were pretty sleazy.

E&D: What’s the wildest gig that Bones have ever played?

E&D: What is the most metal thing to happen at a Bones show?

Jon: We opened for Macabre here in Chicago. I ate some terrible gyros right before we went on stage and I puked all over everything mid scream. There were chunks all over my shirt, bass, and cords. I heard a girl say “I think I can smell it”.

E&D: What are your main memories of the Chicago metal scene when you were first starting out?

Jon: It felt dangerous, like there was electricity in the air. Everything felt so new, mainly because a lot of us were so young, but also because the genre of music was newer. Everyone was scrambling to get signed to a record label, go on tour, live the dream and all that shit, but to be fair, there were a lot of posers around too. Everyone glorifies the 80s like it was the greatest time to be alive. I’m here to tell ya, the 80s sucked just as much as any other time.

E&D: Who are some do your favourite ever Chicago metal bands and what newer bands would you recommend to check out?

Jon: Mostly the usual suspects: the Speckman bands, Funeral Nation, Macabre, Cianide. There was a band from here in the early 90s called Maimed. They were fucking sick. Two new bands worth checking out are Molder and Junkers.

E&D: What albums are you listening to most at the moment?

Jon: I’m listening to Poison Idea – Feel The Darkness right now. The song ‘The Badge’ is fucking killing me like a crosscut saw right now.

E&D: What are your favourite ever metal albums?

E&D: What have been some of your favourite memories of what Usurper have done over the years?

Jon: Our first tour in ’97. It was supposed to be Dark Funeral, Destroyer 666, another band I can’t remember right now and Usurper. For some reason only Dark Funeral came out and the almost the whole tour fell apart because one of the promoters stole all the advance money. We were only able to salvage 5 shows, and we had no idea how to tour….but we did it somehow. Those were early days when we all stuck together. Back in the day Usurper would not take “no” for an answer. Never. We fought tooth and nail for everything. When we pulled-off that nightmare of a mini-tour we felt like we could conquer the world.

E&D: Are there any plans at all for new Usurper music?

Jon: I have no idea. Only our drummer is in the Usurper reunion.

E&D: What have been some of the highlights of your time with Bones so far?

Jon: Everything. We’re an underground band with a very small following. We don’t do this for money (there isn’t any), or fame (there isn’t any) or any of that crap, but every time the three of us are working on new material together in our rehearsal room its more fun than anything else I can think of.