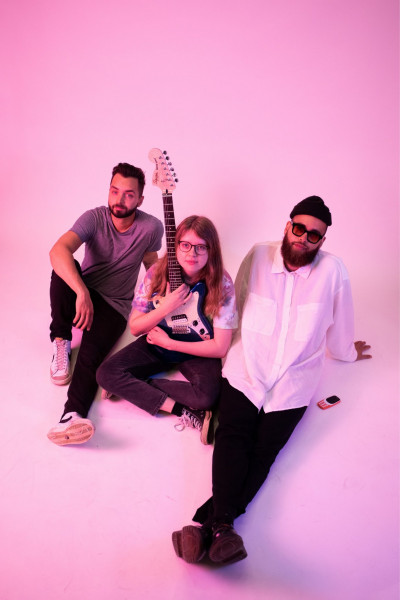 Don’t compare yourself with others because we all have a unique style of playing. Try to surround yourself with like-minded nice people or/and follow inspiring people on social media.

In late August, Charlotta’s Burning Trio, aka CB3, released their newest album, Exploration via Majestic Mountain Records. It’s another incredible release by the trio which tells the tale of a daydreaming character that enters the dream world which then becomes reality. With CB3 in the midst of preparing for a few autumn gigs, Adriana Ciccone caught up with guitarist Charlotta Andersson to find out more about the new album and more.

E&D: You are an accomplished musician, composer, and guitar teacher. I read that the guitar was not your first instrument and that you started playing the violin first. What made you pick up the guitar? Do you still play the violin?

Charlotta: In Sweden we have something called “Musikskola” or “Kulturskola” in english “Music school” or “Culture school”. If you have an interest in music or arts, you can start there to learn. So I went there. When I started the upper secondary school, or gymnasium as we say in Sweden, I got the opportunity to choose another instrument. I was at the time listening a lot to rock music, so I chose the electrical guitar. I do not play the violin so much these days, I don’t have the time, but I enjoy playing the fiddle tunes on guitar or picking up my mandolin (it’s the same tuning as the violin, so almost the same).

Charlotta: When we started to nerd even more with our instrument we got into a higher level of chord structures, scales, rhythms and so on and that naturally led us into improvisational genres and jazz. And then If you want to study music at the university to get a degree it’s mainly either jazz, classical, composition, music production or teaching. For me it has changed a lot, at the beginning it was like Allan Holdsworth, John Coltrane, Charlie Parker, John Mclaughlin, nowadays it is perhaps more like Bill Frisell, Alice Coltrane bands of any genre and people doing different and cool creative stuff.

E&D: Listening to each of your albums throughout the years, one can hear a natural progression from a more jazz influenced landscape to a more psychedelic, heavier sound. Would you agree with this statement and if yes, what would you attribute this progression to? Was it a conscious decision or something more organic?

Charlotta: Yes, I think the progression happened due to a combination of things, both conscious and organic. We started to follow our passion for music instead of trying to fit into something. Playing jazz only didn’t feel right, when actually being into heavier rock music. So, we started to incorporate rock elements into jazz. Then when we were getting more into atmospheric landscapes and weird guitar pedals, we experimented and followed that passion, and our music started to get more layers of psychedelic and space rock sounds. Life has also been a factor to the progression – where we lived, venues, concerts and people you meet. I started to work as a guitar teacher and had to start singing pop/rock songs and discovered an interest for storytelling in lyrics. And I felt that I wanted to tell a story with words, not only melodies. So, we followed and experimented with that.

E&D: I read that a big part of your music is improvised. Do you find that when you play the recorded tracks live that they differ greatly from the recordings? What cues, if any, do you use to keep within the original recorded framework of each track?

Charlotta: The improvisational parts and sometimes tempo and how we play things are always different. We have a framework in the song, sometimes it’s only cues, sometimes it is a chord progression. The latest album we have parts that are dedicated to improvisation and those parts are always different. During the latest gig we decided to try to make more contrasts in some relaxed singing parts, so it has more effect and tension to the experience.

E&D: In August, you released your newest album Explorations via Majestic Mountain Records. It’s an incredible album. What was the inspiration behind this release?

Charlotta: I wanted to tell a story with words and music, inspired by dreamy space adventures, like if you combine Alice in Wonderland with Star Trek. I wanted to let the listener dream away and escape everyday life for a moment. The plan is to make a trilogy of this.

E&D: It is your first-time using vocals on a release. It was unexpected and awesome! You have a great voice, and it was in harmony with the guitar. Was this your first time singing or just the first time in a CB3 recording? Do you think you will continue singing on future albums?

E&D: Your sound is so versatile. You can go from playing soft and dreamy to hard hitting, creating an incredible wall of sound. Can you tell us a bit about your signature guitar sound and your setup? Is there a particular guitar and/or pedal that you love to use the most?

Charlotta: Thanks! My setup changes a bit, but the pedals I always have on my pedalboard are Mad Professor Little Green Wonder (overdrive) and Mighty Red Distortion and Strymon Big Sky with an expression pedal and a freeze pedal. I like to be able to be spontaneous when improvising and doing space landscapes, so I have pedals that make weird and momentary sounds. Like Bananana effects Mandala, two delays: Boss DD8 (I use mainly for glitch and when having a drone), Solid Gold effects (it’s almost like a space echo effect)

E&D: The band’s sound is so vast, wondrous and spacious. Would you say that living in a forest has influenced this?

Charlotta: A bit yes, nowadays I get influenced by the silence, the forest smell when coming home after a day’s work and the feeling of relaxation when sitting on the porch drinking morning coffee.

E&D: In the track, ‘In a Rainbow with Friends’, in the middle of the track there is a synth-like sound. Is that all done on guitar or is that Pelle using his pedal wizardry?

Charlotta: It can be Pelle. BTW that segment was a one-take only. And in the end of that song when we play in harmonies, it is me and Pelle playing.

E&D: Charlotta, you are an inspiration for other female guitarists both young and old, seasoned and aspiring. What advice could or do you give to those just starting out and maybe self-conscious about picking up the guitar for the first time?

Charlotta: If you are interested in playing guitar and learning, just do it. Don’t compare yourself with others because we all have a unique style of playing. Try to surround yourself with like-minded nice people or/and follow inspiring people on social media. Go to concerts for inspiration and finally practise a lot – 5 minutes every day is better than 1 hour one day a week.

E&D: Does the band plan on touring in support of the album?

Charlotta: Yes, we have a few Swedish and Nordic gigs this autumn. We plan on doing a Germany tour next year, if we get the tour funding. Then we have some really cool festivals coming up as well.

E&D: Lastly, if you could jam with any artist or band, either living or dead, who would it be?

Check out this link for more information on concerts, releases and more:  https://linktr.ee/cb3jams