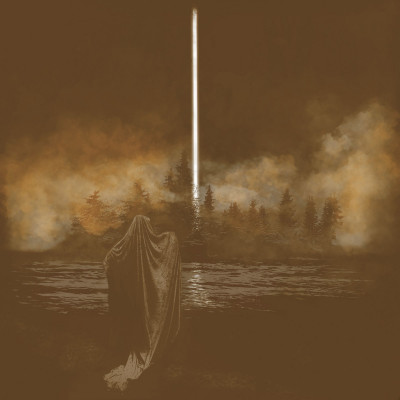 If there were to be an analysis on the current musical make up of post-metal the results would be littered with the fingerprints of Amenra. The sonic emotion that pours from their songs has been an inspiration to many and the current crop of bands and many are doing a great job of taking that influence and adding their own identity to it. Mixing that sound base with doom and sludge Dutch trio Gavran offers up an excellent second release in Indistinct Beacon. The five tracks contain a tremendous sense of transcendental release which stretches far higher than the Amenra genre cornerstone with a mighty impressive effort from a three piece.

It is always harsh to bring Amenra into the discussion so early but they have cast such a huge influential shadow over the scene it can often be disingenuous to ignore it. The band does come close to Amenra in the openings of ‘Dvorac’ and ‘Dim’, the latter of which is the spitting image of ‘Am Kreuz’, and apart from a quieter reprieve in ‘Talas’ the band spends more time in the grounds of some other luminaries in soundscapes and passion. The vocal delivery and instrumental release often matches more with Ireland’s Raum Kingdom with roaring screams and that ethereal rise in the crescendo which gives the tracks a real power even in their dark heaviness.

There are also areas that compare to the post-hardcore approach of Lethvm or the doomed post-metal of Sundr but nowhere does the band just sit on the one sound. The five tracks all flow over the nine minute mark and each hits different heights and impressive vocal displays. Closer ‘Pesak’ is the most laid back before coming to life in the final third to bring a storming end to the album as it ebbs higher and higher before imploding. It is a mighty feat by drummer and vocalist Jamie Kobić to produce an outstanding performance on both those roles.

The progression from debut Still Unavailing to Indistinct Beacon shows a band willing to push the sounds and mix darker atmospheres, heavy textures and an elevating catharsis. With two cracking releases now out, Gavran is certainly a band for fans of post-metal to keep any eye and ear on. Indistinct Beacon encompasses so many genre points and numerous influences yet it is stamped with its own ideas and a magnificent delivery that removes any ideas that they are riding on the coattails of others.