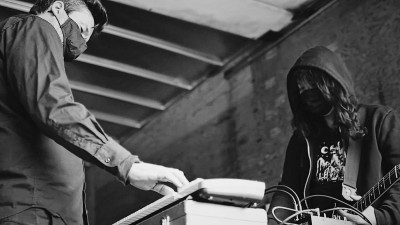 Houses of Worship on the web:
Bandcamp |

What is a better getaway vehicle than a cube truck capable of moving and transporting enough equipment to play a concert?

Not too long ago, Houses of Worship (HofW) released both an album and film titled Migration via Midira Records. The film documents the duo on a tour of sorts that took place in the spring of 2021, after the first covid mandates were eased. The release speaks to the gentrification of artistic neighborhoods and foreshadows what the music scene might look like if nothing is done to stop it. After having watched the film, I felt compelled to ask Eric and Jim a few questions about the release…

E&D: When did you first start to notice gentrification happening in the artistic neighborhoods where you live/work/play? Can you describe a particular area for us and give us a “before and after” picture?

HofW: In Montreal specifically, it’s been happening ever since Montreal was named the next Brooklyn or Seattle or Berlin, when Godspeed and Arcade Fire became the face of the indie music scene and Casa Del Popolo became the pillar of experimental music when it opened in the early 2000’s. For example, I can remember places where I hung out around then, when Jailhouse Rock Café closed down and their owners opened Jupiter Room which also closed down, or club Redemption who turned into the Green Room and the bigger upstairs Main Hall room who didn’t survive due to some doctor moving in the condo next door and causing inspectors to shut it down with his complaints. Same for venues such as Le Bobart or Divan Orange or loft spaces such as Lab.synthèse or La Brique in the 2010’s. All these crackdowns of great and fun underground places to play happened not coincidentally with the whole urban planning of the Quartiers des spectacles at Place des arts downtown that was built over several years as an arts and entertainment district in lieu of the ex-red light district. There’s a good documentary, Montreal Underground (2014) depicting that period, which you can watch for free here.

All in all, we’ve dealt with these struggles for more than 20 years, but the point we were trying to make is that the pandemic made the struggle even harder since we weren’t allowed to gather to defend them against promoters trying to tear everything down, leaving the building empty or without being able to run the businesses to keep paying rent, making it harder to keep these spaces alive. For example, Casa Del Popolo had to convert into a print store to survive before only reopening in June 2022 for the first time since the pandemic, La Vitrola had to close down, several mom and pops’ stores, restaurants, bars closed down as well, as well as people losing their atelier, jam spaces and studios. It’s easier to kick people out of their homes or workspace when we couldn’t work to afford them.

But clearly, the Mile End from the 2000’s, which has been recognized worldwide as one of the best neighbourhoods to live in, in the entire world, is not the same as the Mile End of the 2010’s or the 2020’s.

E&D: How did the idea of driving around Montreal to perform “a series of secret live sets from a cube truck, as an act of appropriation of public spaces” come about? Why use a truck as opposed to just selecting some spots, getting there by car, setting up and playing?

HofW: In the summer, we recorded an album together and it was released in April 2021 by Somewherecold Records. By then, we still couldn’t gather inside due to the restrictions and COVID protocols, so we had to find a way to play outdoors, which wasn’t easy. We tried finding the proper and legal ways to do it, such as asking for permits and such, but the city of Montreal’s bureaucracy is full of red tape, and it was basically impossible if you were not a registered and established organisation with a history of doing public events and proper accounting ledgers and such. So we had to do it guerilla-style. Finding a spot without authorization would literally put us in a situation of having to plan and publicise the spot to gather an audience and basically at the risk of getting caught. What is a better getaway vehicle than a cube truck capable of moving and transporting enough equipment to play a concert?

E&D: How difficult was it to find a truck?

HofW: Jim used to be a mover, but it was actually his friend who worked for a non-profit organization that supports refugee claimants in Montreal – they’d pick up donated furniture which was used to furnish newcomers’ living spaces. Jim’s friend would park the truck near our jam space, and we’d go and hang out in the box with the door open. A place we could socialize outside of homes and bars, that is still outdoors. That’s how we had the idea of using a cube truck to play gigs in.

E&D: How difficult was it to find a power source?

HofW: We rented a generator, which we had problems securing at first but we also found out we weren’t allowed to use them in parks. We also bought really long extension cords to run them from our jam space on the second floor. Certain parks have outlets. We also thought about playing in front of record stores where we could borrow electricity.

E&D: Did you have any issues finding a spot to stop and park? When selecting the locations to stop and play, did you plan it out beforehand?

HofW: We did a lot of scouting and planning beforehand with our film crew, especially since we knew certain key locations would be taken on the moemny and we’d need quick alternatives. Extra precautions had to be taken when filming near the oil refineries in the east-end of the city, as we knew people who got caught there while shooting music videos. As we were using a drone to film, we also had to be aware of where we could fly it and not lose it among all the obstacles.

E&D: In one of the scenes in the film, we see someone sitting on a couch enjoying the performance. Did you happen to find the couch at the location or did you bring it to the location?

HofW: Jim’s friend from the truck brought a selection of accessories and furniture such as tables we needed to set up; the couch was part of those.

E&D: Did people who stopped to watch the performance ask any questions as to what was going on and why?

HofW: At that point, it was about a year and a half without music, activities or events. We set up to play when the weather was nice so people were out and about. A lot of people who stopped by didn’t know anything about it, it just happened and you literally had to be there at the right time. Most people who caught our performances were pleasantly surprised and stayed as long as they wished to, while others were a bit perplexed but curious. The performances weren’t advertised as it was hard to plan where we’d stop and play, and we were more focused on making it happen in the first place, but they were also live streamed.

Since the film was made, pandemic restrictions have been lifted and shows have resumed, somewhat. Practice spaces, at least here in Ottawa, are still hard to come by, from what I hear anyway. Is it too early to tell whether the music scene will or has bounced back or has the pandemic sealed its fate?

When everything started again, it felt like a reset, but not so much in a ground zero kind of way. A lot of organizations or promoters who managed to get funding during the pandemic had the means to be prepared when things started to re-open, and so the local bands who played the most were those who already had support and who were more active or hyped. As you can imagine, people wanted to move and dance first and foremost and experimental music is something introverted that allows you to relax and meditate and take it all in, so there wasn’t much of that stuff going on. It’s like we had to wait our turn until the audience got tired of the “fun” music before we could get to the “abstract artsy” music. Those who changed careers or re-invented themselves during the pandemic may have been on another path for a while before recommitting to arts and music, which is often considered as hobbies and side-activities. Working and making up for lost time and money have become the priority for most people and so the scene has shifted, with a lot of hungry newcomers and a lot of artists on the verge of being has-been if they have already given up or choose not to re-activate themselves in meaningful ways. Everything is harder now and it’s a brave new world, it’s really not the time to rest on your past laurels.

E&D: Do you think technology has played a role in gentrification? Has technology made the in person enjoyment of music and art obsolete (I don’t think so but wanted to know your take on that)?

HofW: Technology definitely played a role in gentrification but not exactly for the reasons you describe, in the sense that tech companies do have the means to move into any hip up and coming area and invade the neighborhood, so to speak. You can definitely feel it with the new thriving AI hub in Montreal, for example with Mila who has its HQ in the heart of Little Italy, just north of Mile End where everyone moved after the 2000’s wave of gentrification, which pushed people further north to Villeray and Ahuntsic.

In terms of the actual immersive AI technology and live streaming technology, we definitely proved that it was a failed experiment and that we’re still not as advanced as we thought we were in that area to make the experience enjoyable enough. In that sense, live music and live arts is by far untouchable as far as experiencing something real, or even as a social event or social interaction. However, everything got really expensive, and price tickets, while justifiable, are starting to get indecent, may contribute to not being able to enjoy things as much as before, and may segregate those who can and cannot afford it.

E&D: What would you like people in and out of the scene to do to help curb gentrification?

HofW: Don’t take arts and music for granted, shop locally, invest in your communities, don’t be an individualist, see the big picture, read about corporations and about capitalism, think about marginalized communities, be empathic and be kind, don’t be an asshole, help everyone, share everything.