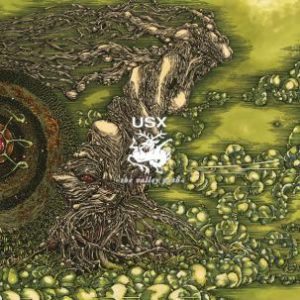 Before a couple of days ago, I was completely unaware of the existence of US Christmas (or USX if you are one of the cool kids like me). When I opened the file that comprises the album ‘The Valley Path’, I immediately noticed that it’s a single, almost 40-minute long track. Uh-oh.

I can’t lie, I was not sure what to think about a 40-minute song; even in the world of Progressive Rock, 40 minutes is a long song. Rather than overthink it, and listen to something else, I started up the song. How bad could it be, right? I mean, I have listened to ‘In a-Gadda-da-vida’ at least once in my life. I can listen to anything once.

Thank all that is good that I listened to ‘The Valley Path’. Mind blown.

(Cliché? Yes, probably, but ‘The Valley Path’ is a genius piece of music.)

How a band this good can fly under my ‘really good band’ radar is beyond me. I started doing a little reading on this band of enigmas, since I believe these guys (and gal, on violin) should be hugely successful and touring the world, a household name.

I found out through some older interviews that USX work hard at staying independent from the mainstream music industry, preferring to do what works for the band members and the music. The members of USX work day jobs (electrician and teacher to name two), so they are not fulltime musicians. They have families and basically only tour regionally and infrequently on the East Coast of the US.

The region they hail from is better known for BBQ, Bluegrass, and (Jack Daniels) Bourbon, not for sophisticated and progressive music (although the legendary Corrosion of Conformity are from the relatively nearby Raleigh, North Carolina).

When you hear the name ‘Appalachia’, you are more likely to think ‘Dueling Banjos’ than dark, expressive music of this ilk.

And when I say dark, I mean ‘Sabbath with Dio’ dark. ‘The Valley Path’ starts out slow and builds, almost to the point where I was expecting it to shift in to high gear (a la Slayer ‘South of Heaven’), but it never does, even as the drums become much more prominent. The tempo of the first 12 minutes (in fact the whole song for that matter) never gets much faster than Funeral Dirge-speed, but never lags. There is so much going on in the layers of this song that I brought out my expensive (and oppressively hot) headphones to get the best listen.

At times in this expansive and brooding track, I am reminded of the Doors, Danzig, Pink Floyd and Hawkwind, to name just a few! I have seen USX referred to as psychedelic and as a metal band, but I don’t think that either of those labels is entirely apt (or entirely incorrect either!).

‘The Valley Path’ runs the emotional gauntlet, only becoming slightly more upbeat near the end mark. The whole song is so relatable and listenable because USX are not spoon-feeding the listener what to feel and when. It leaves a lot of room for each listener to relate in her or his own way. Positively Masterful.

Discovering this kind of musical virtuosity is really rare, and to find this band while they are actively making music is the icing on the cake. I rate this album a ‘BUY NOW’ with no reservations.