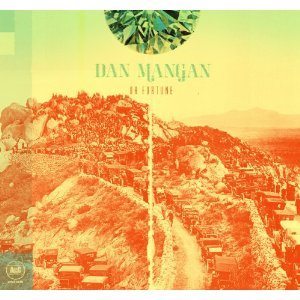 There may be a few album openers from 2011 that are better than ‘About as Helpful as You Can Be Without Actually Being Any Help at All’, the wonderfully-titled first song on Dan Mangan‘s latest album, ‘Oh Fortune’, but I doubt very much if they are anywhere near as ornate. It is a song so perfectly constructed and orchestrated that barely has it ended before the listener is wondering if the album has already hit its high point. It’s one of those rare songs that immediately sets the bar, and I hardly would have blamed the other ten songs if they’d all striven to live up to it.

However, ’Oh Fortune’ is not one of those albums where its other songs try fruitlessly to catch up to the highlight. It has more pressing things on its mind, like filling its 41 minutes with as much sweeping grandeur as it is possible to do without collapsing in on itself. The thunderous ‘Post-War Blues’ gives the lie to its melancholic title by presenting itself as an upbeat rallying call, with lines like, ‘Let’s start a war for the kids, a purpose for which to unite‘ showing that Mangan has set his sights on the big issues and sounds supremely confident that he’ll hit his mark. I can imagine that very few people will fail to be moved by the song’s triumphant finale.

Almost immediately it has finished, the gathering momentum slackens a little as Mangan brings to mind an even more despondent Conor J. O’Brien with ‘If I Am Dead’, a song that would not have sounded out of place on the Villagers album from last year. Far be it from me to compare the two, but it must be noted that, in a similar way to ‘Becoming a Jackal’, ‘Oh Fortune’ skilfully balances light and shade, its optimistic opening run giving way to a more introspective feel that is reflected in songs like ‘Daffodil’ and ‘Regarding Death and Dying’.

Mangan could hardly be said to have a fixation with death in the way that, say, White Lies do, but the more maudlin aspects of his third album towards its close, with ‘Jeopardy’ finding him relentlessly questioning his existence yet still managing to end the album on a happy note with a trumpet-laden finale. In a way, ‘Oh Fortune’ could be said to be a misleading album, but all eleven of these songs, from its simplest to its most ambitious (the three-part mini-epic ‘Starts With Them Ends With Us’), uplifting, despairing or anywhere in between, are unquestionably beautiful.