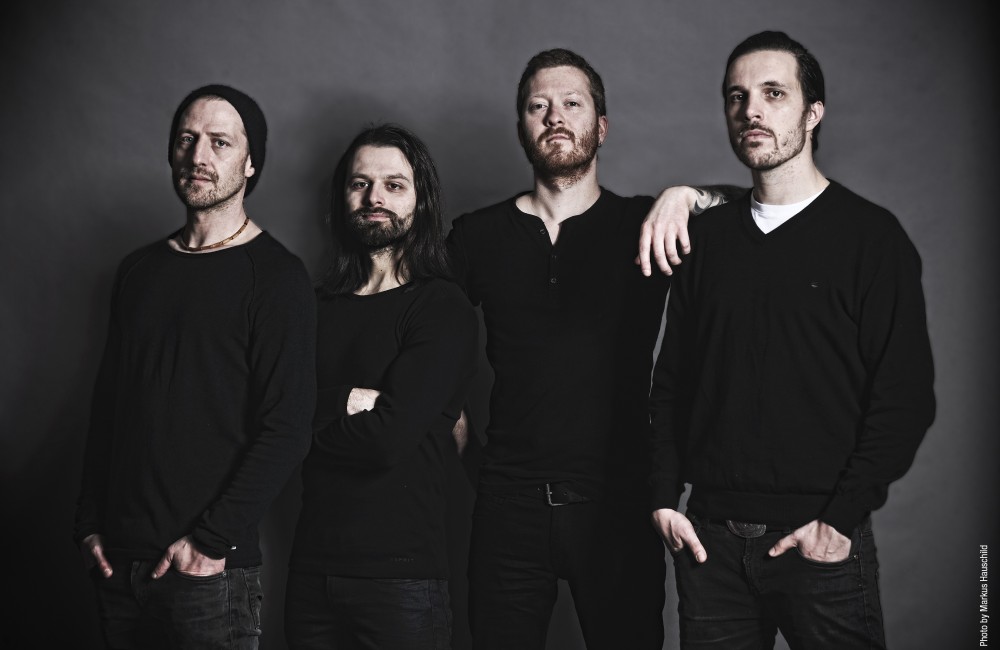 German progressive rockers Long Distance Calling are about to release their new album Trips and to start a European tour to promote the album. Despite the slight change in direction Andrew Rawlinson mentioned in his review that Trips is “a really great album that is packed full of great songs whilst retaining their intrinsic sound.” Enough reason for Andrew to fire some questions over to bass player Jan Hoffman.

(((o))): As a band you have been going for almost ten years, how has the journey been thus far?

Jan: Hey! Well, it has been a great journey so far, the band has sent us to more than 20 countries and we are still hungry like on the first day. Those ten year went by so quick we can’t believe it, time flies! Onward to the next 10 years.

(((o))): Your about to release you new album Trips, which is another evolutionary step from your ‘original sound’, how has the song writing process changed between The Flood Inside and today?

Jan: Actually a lot. For Trips we left our comfort zone and our daily environment. We worked with a producer for the first time and for the songwriting itself, we went to new places for us like a cabin in the forest or a house at the sea, which was really inspiring and there were no distractions, which was really important to focus. This album got our full attention and focus and I think you can hear that.

(((o))): You have recently announced Petter Carlsen as a new permanent vocalist after Martin Fischer’s departure. How did you meet and how did he become involved in the band?

Jan: Well, Petter is the vocalist for Trips and he will join us on tour, let’s see what happens in the future, we don’t think that far, but there’s definitely maybe to work with Petter again if he’s into it. He is a great vocalist and a great dude! Let’s see what happens…

(((o))): A quote about ‘Time Travel’ and ‘Dreams’ is mentioned very prominently during a narration segment in Trips, can you provide some more insight into this and how or if it ties into the concept of the album?

Jan: Well, the idea behind Trips is basically time travelling in dreams so Trips is a synonym for “Dreams” in a way. “We all have our time machines…” is one of the idea which means everyone is able to travel time in his dreams, forth and back which is a real nice idea to play around with. It’s about getting back in time to childhood or the well known idea to be able to change things and history in a way if we could and also going to the future, may it be dark or uplifting dreams. It’s a very dynamic and intense process and sometimes it happens that, for a moment, you are not able to say if things are real or “just a dream”.

(((o))): Who designed the album cover and does it tie into the album’s themes?

Jan: The beautiful artwork was created by Martin Grossmann, with whom we worked before, he is a close friend of the band and we trust him 100%. I don’t want to speak too much about the artwork as everyone should make up his own mind about it, but you can see that the head and the lower part oft he body are flowing away from the place in which the body is right now so this refers to the idea of time in a nice way.

(((o))): Back in 2014 you ran a Pledge Music campaign for a ‘jam’ EP which resulted in Nighthawk, did you enjoy the crowd funding process itself and do you plan to return to this idea in the future?

Jan: It´s was a really cool thing to do, very interesting and fresh, but also a lot of work. We did it because our record deal expired after The Flood Inside, so for this EP we were free to do whatever we want and that’s why we did it. As for now we have gone back to the “traditional way” to release our music, but never say never, maybe we will do this again in the future. But I think it’s important to not overwork this idea as some bands seem to be a bit too greedy towards their fans.

(((o))): You are about to start a short European tour including several UK dates, any new places that you are excited to play? And what can a first timer expect from a Long Distance Calling show?

Jan: Yes we are really very much looking forward to the tour! We will play another tour in Autumn and we are also working on a couple of other ideas at the moment! They can expect a very passionate and intense live show because we love what we do and you can hear and see that I think.

Jan: There were many great moments and maybe everyone in the band would say something different, but for me it was the moment when we signed our first record deal, then playing Rock am Ring festival, doing support for Deftones and Katatonia etc. We met a lot of great people and bands and this made us what we are now.

(((o))): You’re given the opportunity to create your own festival, who would be the first five bands on your list?

Jan: Haha this is difficult! Everyone in the band would probably say something completely different. If there would be an endless budget I guess it would be Tool, Muse, Anathema, Deftones and Biffy Clyro for me. And us of course.