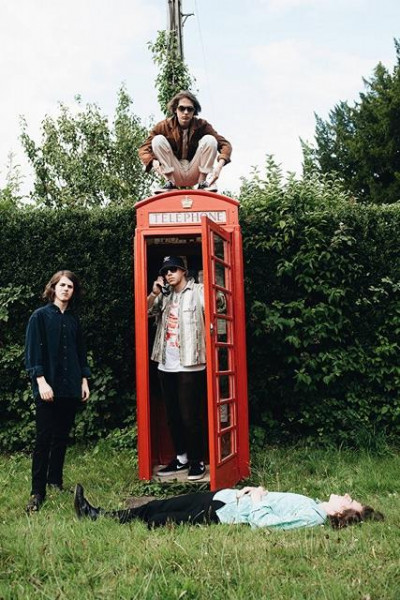 Vinyl Staircase are a psych four piece from Dorking, Surrey. They’ve been playing their lively and youthful sets all over venues around the south east of England and generating a good deal of interest. The band have a taken huge steps to developing their sound, blending influences from Brian Jonestown Massacre, Sunflower Bean and The Horrors to create a joyous rollercoaster of riffs and drum barrages topped with chilling vocals that send a spark straight into your brain fuzz.

Vinyl Staircase are a psych four piece from Dorking, Surrey. They’ve been playing their lively and youthful sets all over venues around the south east of England and generating a good deal of interest. The band have a taken huge steps to developing their sound, blending influences from Brian Jonestown Massacre, Sunflower Bean and The Horrors to create a joyous rollercoaster of riffs and drum barrages topped with chilling vocals that send a spark straight into your brain fuzz. The band consists of Mike Thorpe (Guitar/vocals), Jake Andrews (Guitar/vocals), Luke Andrews (Drums/vocals) and George Ogle (Bass). Having already released a hypnotising single ‘German Wings’ which grabbed the attention of BBC Radio and NME they are due to release a fresh EP alongside their headline show at Birthdays in Dalston, London on Thursday 22nd February 2018. I managed to have a chat with the band about how they met, growing up in Dorking and their new single.

Mike: Hi, just down the local nursin’ a pint.

(((o))): Can you tell us a bit about how you all met and how long you guys have been together?

Mike: Jake and Luke are twin brothers so they met pretty early on. I started jamming with them way back when and George ‘Barry Cetemol’ Ogle joined in the fall of 2016.

Mike: I was given a Buddy Holly CD by my old man which I played until it would no longer play. Fun Fact: Buddy Holly died on my birthday. Jake and Luke were raised by keyboard phenomenon Phil Andrews of The Dubious Brothers. George was conceived in the Hacienda.

Mike: It’s equidistant between London and Brighton, so we’ve been able to check out a lot of live music in both of those places. All of Surrey’s music pretty much revolves around The Boileroom in Guildford.

(((o))): I’ve been enjoying your single ‘German Wings’ and felt it went a long way to define your sound, would you agree and how will your new single build on this?

Mike: ‘German Wings’ was one of the first songs we wrote as the current line-up, so naturally we thought it should be the first thing we released. We used it as a backdrop for 2017’s gigs. The new EP was recorded in the same way at home, entirely by us, which defines the sound to some extent.

Mike: Usually we just skin up a fatty and let the cosmos do the work.

(((o))): I always hear a lot of unreleased songs when you play live, are there plans for a project maybe an album forming or are they more a collection of individual songs?

Mike: EP is complete and ready to come out your speakers and grab you by the gullet.

(((o))): I’ve had some pretty lively nights watching you guys play, have any of you ever got injured while performing?

Mike: I busted his chin at one of our bi-annual Christmas shows. We were loading out though so not really that rock n roll.

(((o))): Do you guys have a favourite venue or favourite show you’ve played in the past?

Mike: Lexington with LA Witch was good way to begin the year last year but Sebright Arms with Sunflower Bean was the gig we were most excited about and playing Boileroom with Wolf Alice was great.

Mike: The main one is our headline show at Birthdays, Dalston in London on Thurs 22nd Feb. You can also catch us down the local most nights, 6 till late.

Jake: HAIM – Something To Tell You

Thanks for taking the time to talk with us today, peace.