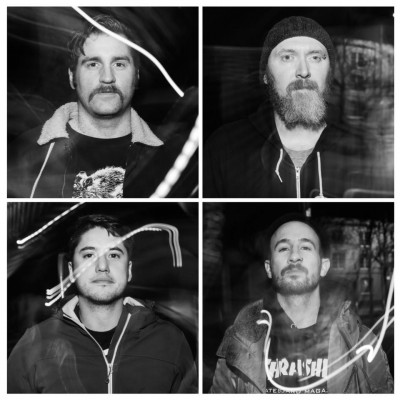 And So I Watch You From Afar at Manchester Academy 2

Gallops, the only support for the evening emerged on stage to a dark, half-empty room, in a wave of feedback that suddenly fell to quiet. They opened with ‘Pale Force’ from their 2017 album Bronze Mystic, the band are instantly energetic, the track bounces along with synths giving way to guitar. The band have a huge sound and are very tight. Without so much as a greeting the band go straight into ‘G is for Julie’ from their pre-breakup Yours Sincerely, Dr Hardcore. This track is heavier and punchier, the drums taut and complex. Although I am not so familiar with the bands earlier work the electronic influence on later material is evident.

Watching Gallops on stage it can be hard to work out what is coming from where, Mark Huckridge swaps instruments seemingly at random. The Manchester crowd seemed a little subdued. Though it might be that they are paying attention. The band are evidently focussed on what they are doing, consequently it was a low-key stage show. This is not to say it is boring, the music has plenty to keep it interesting. Brad Whyte (guitars) does an excellent job of rounding out the band’s sound with some Johnny Greenwood frenetic strumming, and drummer (Liam Edwards) has an innate sense of when to hold back and when to let go. Watching Gallops it’s very easy to fall into the music somewhat and lose track of where you are in the gig, which is a testament to the quality of the show.

Their penultimate song, ‘Crystal Trap’ builds to a stunning crescendo, a wall of noise, light and vocal wails, Huckridge playing his guitar parts with a drumstick. Verging on the edge of total chaos the track falls back to where it started. Ending the set, ‘Dark Jewel’, which evidently more people were aware of, subtly builds. The off-kilter beat keeps the track going as it develops into a thumping conclusion. At this point I realised the band use volume and intensity to great effect, going from minimalist quiet to super-loud in the matter of minutes.

I have seen And So I Watch You From Afar  a while back and it’s good to see them come into, if not quite the mainstream, at least the alternative mainstream. Especially as not a lot of instrumental bands tend to do this. I think the reason maybe is that the band have a knack for catchy and memorable tracks and a lively and energetic live show. 2017 saw the bands release The Endless Shimmering which sees the band take a heavier, slightly more stripped-back sound.

Their set opens with a dark stage, noisy feedback before the stage exploded into red and blue light. Right from the start the band have a confidence about them, exuding energy from the stage, band members smiling. The light show is immediately impressive, piercing and well thought out and adds to the dynamic of the show. The band kicked off with the familiar, jerky riff from ‘Search:Party:Animal’ before quickly running into ‘S is for Salamander’. Drummer (Chris Wee) is sharp and on point, the band are comfortable and in the groove of these road-worn, older tracks. The back-and-forth riffs on ‘Like a Mouse’ are tight.

‘Terrors of Pleasure’, from The Endless Shimmering is full of slightly unusual guitar sounds, still plenty of chunky chords and riffs, but with an evident pairing back of the guitar effects from some of their previous output. Jonathan Adgar’s bass is angular and cuts through the mix. ‘Beautiful Universe Master Champion’ brought a ripple of activity from the crowd. Some of the detail in the tracks is lost, but infused with a confidence that presumably comes with both skill and familiarity, the sounds is more full and rounded. When I saw them previously they started a bit slow and took a while to warm up; here, they started good and just got better.

The guitars and bass mesh to form a cohesive wall of noise, the previously prominent bass sits back into the mix and only the cymbals are cutting through. This, combined with the stage, bathed in white light, whilst the three guitarists were silhouetted heads bobbing in focused energy and concentration makes for an arresting experience. ‘7 Billion People All Alive at Once’ shows the range from minimal and subtle to full on. The band use this dynamic to stunning effect. It is only a shame that there always seems to be a few people who want to have loud conversations during these parts. It must be obvious from the stage and at times you could see a bit of frustration from the band members. Undeterred the set carried on with another new track, ‘Dying Giants’ which opens with a characteristic bouncy riff, guitarists seemingly bouncing off each other. A good track although not sure at this stage in the set, considering it’s probably not ye that well known to most people. Ending the main part of the set was the fantastic ‘Set Guitars to Kill’. The opening riff bouncing the room, the crowd (probably at peak alcohol content at this point) are absolutely revelling in it. The band are absolutely in their element and energy is feeding back from the stage to the crows and vice versa.

All of a sudden the room is quiet as  the set ends. ASIWYFA don’t feel like a band who should do encores and leave that kind of thing to pop bands. I suppose that you can’t blame them taking a few minutes for a beer and a smoke but it did seem a shame to break the atmosphere. The encore started with the pleasingly  triumphant sounding ‘Run Home’. The band really seemed to relax into and enjoy the older songs. My worry about a break in atmosphere was unfounded, as they dropped back straight into the pocket.The room was bouncing for ‘Eunoia’/’Big Thinks Do Remarkable’. Clapping broke out (which the crowd have been on the verge on for a while). The song’s tempo and volume increases with a rare use of vocals, albeit a chant from all members, which brought the track to a exciting crescendo. Their set ends with ‘The Voiceless’, the show ending with the stage full of light, smoke and sound and then we’re suddenly thrust back to reality with the house lights, back in to the rainy Manchester evening.

An excellent show from both bands, Gallops are a band that really deserve some more exposure. And So I Watch You From Afar are a band growing in confidence, they have honed their craft and mixed an excellent set including both older tracks and tracks from their most recent release, and finding the right balance between them.