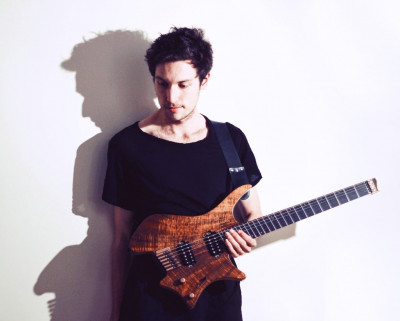 I just don’t feel the need to play guitar really fast or really technically all the time... I think I’m more a composer than a guitarist, it’s just guitar happens to be my main instrument.

With a forthcoming opening slot at Be Prog! My Friend at the end of the month, expect Plini to win over new fans with his sound and style that eschews technical virtuosity for its own sake in favour of a more considered approach to guitar music. Easy going and laid back, the travel-mad music fan brings us up to speed with his career to date, and looks ahead to what’s next…

E&D: You’re about to finish your 28 date US tour. How’s that been as an experience?

Plini: It’s going amazing. We’re on the third last show; nothing bad has happened, every day has been easy, every single person on the tour is awesome and the crowds have been awesome. It’s kinda like a holiday.

E&D: You’ve been playing with Tesseract on this tour.

Plini: I love them. I can’t say anything bad about them cos we’re going out in Europe at the end of the year! I have nothing bad to say about them anyway. I played three shows with them in 2015 in Australia and kind of got to know them. It’s been cool to see them every single day (on this tour) and we’ve become actual friends. I watch most of their set every night cos they’re just an insanely good band. Not only that, but their new album came out at the beginning of the tour and there are some nights or days off where I will listen to the same album on headphones, so I guess that makes me a fanboy!

E&D: Are you looking forward to Be Prog! My Friend in Barcelona, at the end of the month? There are some great artists you’ll be sharing the bill with.

Plini: I can’t wait. I’ve been a fan of the festival pretty much since it started. I love travelling and I love all the old architecture in Europe. I think having a festival like that in a place like that is an amazing idea. So yeah – it’s unreal to get to do it. I’m hoping we get there for day one, cos I’d love to see Baroness, but the line-up on the day I’m playing is going to be amazing too.

E&D: Growing up, was this artistic career something you always wanted to do? Max Verstappen, the young racing driver, was recently quoted saying “I didn’t have pictures of racing drivers on the wall as a child, I just wanted to drive fast”. What was your inspiration?

Plini: I’ve always been a huge fan of music. I think Dream Theater were probably the first band that I became a superfan of, and started reading all their interviews and learning their songs. I always thought watching their live DVDs, and pretty much any live DVD, playing music with your friends, in front of a crowd, would be the most fun thing, and getting to travel the world while you do it… I never really expected to do it, or planned to do it, I just kinda made music as a hobby, but thanks to the Internet I accidentally started developing a following, and then realised this was something I could pursue, and then I really worked at it, and now I’m just living a bit of a dream.

E&D: Handmade Cities was a big milestone in your career to date. What was the process of making that album and how do you look back on it now?

Plini: I guess I’d done three EPs and I felt like it was time to make an album. It was also fun, because I thought “I want to put together a collection of songs where they’re all good, they’re all slightly different and they’re all slightly the same, and then I’ll see what happens”. It has been great. It’s interesting because I feel like the package of an album is starting to mean less, especially in pop music. People are just releasing singles and then more singles. I guess as a statement it’s still is the most bold thing for a musician to do.

E&D: Bringing us up-to-date, you recently released ‘Salt & Charcoal’. How would you describe the development of your sound?

Plini: I guess it’s more explorative rhythmically. What I’ve noticed is the music that I write is a delayed reaction to the music I listen to, by a few years. So Handmade Cities is the result of an entire growing up listening to Dream Theater and Steve Vai and all that kinda great prog guitar music, and then in the last few years I’ve listened to a lot more electronic music, jazz, fusion, ambient, that kinda stuff, and that’s starting to creep into it, I guess using electronic music vocal production in little parts of that song. I’m playing with different styles of production other than typical guitar music.

E&D: You are a virtuoso on the guitar, and this forms part of what you do. What’s your relationship with practicing your instrument?

Plini: I never liked it and I’ve never really done it. I have very brief periods when I’ll want to get really good at this one technique, but an hour later I get bored and just wanna noodle around. But I guess because I’ve been recording for so long, and touring for a little bit now, just the repetition of playing the part 100 times until it sounds good, or playing the same song every day for a month, has been my kind of practice.

E&D: You’ve got a great relationship with Jakub Zytecki and he’s someone you’ve played with in the past. You talked earlier about the way you looked up to guitarists like Steve Vai and John Petrucci (sp?) Are you now a mentor to a new generation of guitarists coming through?

Plini: (uncertainly) Maybe. I mean I teach on the road pretty much every day to a handful of people so I guess in some way they’re looking up to what I’m doing. But someone like Jakub I was a fan of his before he knew of me. It’s kinda crazy – I would always scour the Internet for great guitarists, so I found some demo of his and I was like “man, this guy has one of the best touches on the instrument and all the technique in the world”. Then a couple of years later he found my music, and we were both like “holy shit – I know you, you know me, this is amazing, we should play together”. Now I guess we’re in a little scene of guitarists who are trying to do new things and push what guitar music can be forward.

E&D: Can technical virtuosity be a barrier to some listeners? If you’re in a band, no-one would assume that your music is going to be overly technical. But this is a tag you carry around with you. Is that a curse as well as a blessing?

Plini: I guess it depends what you’re trying to express. In general musicians these days are just ridiculously good technically. Like a 15 year old on Instagram has better technique that some of the best guitarists in the world of the 70s and 80s, I guess as a result of people evolving. Like the same way Olympians are just running faster every year, somehow. But then it comes down to what you’re trying to do. Someone like Jakub has far superior technique that a lot of the “fast playing” musicians, but he chooses not to because he listens to more ambient and downtempo stuff and just wants to do that. It’s the same for me, although I don’t have the same technical facility as someone like him, but I just don’t feel the need to play guitar really fast or really technically all the time. I think it’s more meaningful if it’s just kinda sprinkled in.

E&D: Composition is a defining feature of your career so far and it’s one thing that separates technical players from artists.

Plini: I think I’m more a composer than a guitarist, it’s just guitar happens to be my main instrument. I’m finding more and more that I’m doing less on the guitar and more with everything else. Like ‘Salt & Charcoal’ – it’s funny playing it like because there’s a whole 20-30 seconds where I’m just standing on stage, doing absolutely nothing whilst the drums and bass do a whole load of crazy stuff. I really like that because it makes me feel more like I’m conducting a band of amazing musicians than employing a bunch of people to support my guitar ego.

E&D: What’s next for you creatively?

Plini: I’ve just finished recording an EP that’s being mixed at the moment and will be announced before Be Prog! and released a little bit after.

E&D: Do you have anything special planned for the appearance at Be Prog! My Friend?

Plini: Not yet, but we’ve been developing the set on this tour, changing little parts here and there, and I think it being the last show of that tour, everything will be really locked in and full of little surprises.