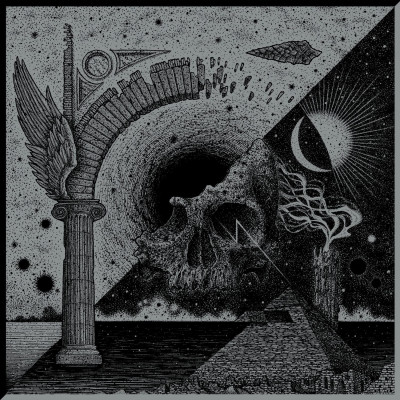 Lux Tenebris by The Secret

It’s been six years since Italian black metal / grindcore outfit The Secret released their previous full length album Agnus Dei. In these years of silence however, between sporadic tours and shows, something beneath the surface was stirring. This ominous “something” takes the form of the long awaited Lux Tenebris EP, a blackened doom whirlwind which will punish all those who stand too close.

It’s no secret that The Secret have braved the tidal waters of blackened doom metal before, with tracks such as ‘Cross Builder’ and ‘Bell of Urgency’ off of their 2010 full length Solve Et Coagula, clearly showing that they’re more than capable of bringing together the bleak atmosphere of black metal and soul crushing riffage of doom. Lux Tenebris is a different beast however, with the group pushing their fuzz filled landscapes and down tempo darkness even further than before.

The first notable difference before you even hit play on Lux Tenebris are the track lengths. Being a grindcore band at heart, track lengths on their previous releases usually sat in the one to two minute time frame, unless they were channeling their inner Iommi on their more doom fuelled ventures. The longest and rather fittingly the last track on Lux Tenebris is a rather healthy 7:12. This alone should show you that The Secret are pushing some of their own boundaries on this release.

The first track, ‘Vertigo’ serves as the intro and sets the tone for the entire release right from the offset. The lurking, droning bass synth, evil guitar riffs and haunting vocal delivery drops you straight into the twisted and oppressive atmosphere that Lux Tenebris has to offer. ‘Vertigo’ continues to build its vocal and guitar layers, resulting in a tense and borderline hypnotic passage which, though truly headbang worthy, never quite explodes into the true punishment you feel you deserve. ‘Vertigo’ does serve the purpose of introduction well however, setting you up for the rest of the EP.

You’re then thrust into ‘The Sorrowful Void’ which right from the get go slaps you with band’s iconic sound. Dissonant black metal guitars are met with barbaric blast beats, before digging deep into its grindcore inspired verse. Bringing Vocalist Marco Coslovich back into the fray from his sparse vocal parts in the first track makes it feel like The Secret are back in their stride. The tracks cuts dead, before slowly bringing back more and more guitar parts which builds into a wonderful cacophony of speaker blowing riffs and probably the most piercing guitar lead on this release. The fade out is a shame, as the band definitely could’ve done more with this huge outro section, ensuring it would’ve destroy you from start to finish.

We’re then onto the final, longest and by far most brutal track on Lux Tenebris, ‘Cupio Dissolvi’, which roughly translates as “I wish to be dissolved”. This track will make you do just that, dissolve. Its more cohesive nature makes the multifaceted structure flow far more naturally than the previous two tracks, constantly beating you over the head with unrelenting force. The slower bridge section of this piece builds far more tension than ‘The Sorrowful Void’, and brings about the same hypnotic head bob that ‘Vertigo’ did. Granted ‘Cupio Dissolvi’ doesn’t have a fade out but it does just, fizzle out. A strong finish to the track would’ve ended the EP on the crushing note it deserves.

With Lux Tenebris, The Secret make a statement. The band has been held in high regard by music lovers with a taste for truly punishing blackened grindcore and void calling doom metal. The Secret doesn’t disappoint with this EP, but it feels like a preamble to something bigger, a way for the band to re-grease the gears of their evil war machine and get their teeth back into the jugular of the underground metal scene. It lacks the overall finesse and sheer brutality of their earlier work, but the greater focus on texture and atmosphere on Lux Tenebris is a welcome addition to their lexicon.