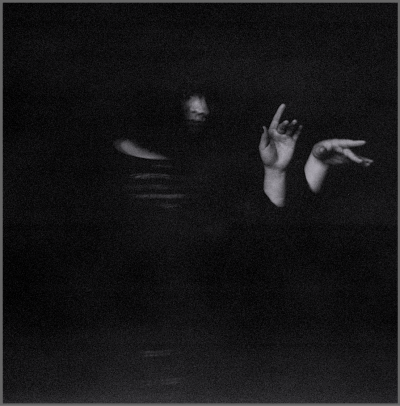 "I really like having something like video art or movies or music videos in the corner of my eye while I improvise. I think Icelandic culture is definitely very open minded for the arts, but there could be more funding from the government into music institutions and more proper concerts venues"

Let’s be honest most music you hear after a certain age can be slotted in alongside already known musicians and bands, placed into a rough category, your musical universe starts to assume a shape. For writers the ‘sounds a bit like’ go to is quite handy, nothing wrong with common points of reference, a common framework. BUT every now and then you hear something that is so utterly different that you can’t, and possibly will never be able to, slot it alongside something similar. Henry Cow from the ‘70s still sound unique to me, I’m yet to hear a comparative band, and now there is another, Berlin based Icelandic musician Hekla Magnusdottir!

One Sunday night in August I was listening to The Freak Zone on Radio 6 when her track ‘Hatur’ came shimmering out of the radio, otherworldly, ethereal, music from another set of assumptions about the relationship between sound, structure and the human psyche.

The ethereal beauty of Hekla’s music is based around the combination of theremin (not an instrument many of us are familiar with) and her voice, the video to ‘Ekki Er Allt Gull Sem Gloir’ contextualising them within an Icelandic landscape.

Already Hekla has had two releases and music included in a French film Les Garcons Sauvages with her new album ‘A’ coming out in September on Phantom Limb.

Intrigued by her music and it’s eerie, fragile beauty I contacted Hekla in Berlin, where she now lives with her family (1), to find out more…

(((o))): I was listening to ‘The Freak Zone’ on Radio 6 when this enchanting, atmospheric beautiful music came on, it was ‘Hatur’ off your new album, some British readers may not have heard of you, could you tell us a little about yourself musically?

I started to learn cello at nine and then went to study composition in university. But I think my approach to composition is not classical at all. I just like to improvise and play with effects and also like to make drawings and patterns that I then try to play with various different outcomes.

(((o))): I’ve only ever seen the theremin being played by John Otway! Could you tell us a little bit about it? Why did you decide to take it up as an instrument?

The theremin is an electronic music instrument. You play it by using your hands to manipulate the electromagnetic fields emitted by two antennas, one for pitch and one for volume. It was popular in 50s science fiction movie soundtracks. I had heard about the instrument and when I saw it in a music store I just decided to buy it on a whim.

(((o))): Have there been any artists or musicians that have particularly inspired you?

Pamelia Stickney, Clara Rockmore and friends of mine doing music. Especially female friends doing their own thing is most inspiring to me.

(((o))): You are also part of an Icelandic surf rock band, Bárujárn (1), do you play the theremin when with the band? Are you looking to create very different sounds with Bárujárn than in your solo work?

Yes! Around 2008 I was at a bar and the band members just told me to go grab my theremin and I just did sound effects, I didn’t even know the songs. I definitely do very different sounds with Bárujárn. When I play with them now I do less effects with them, it’s more haunting melodies while by myself it is much more experimental so it has totally flipped.

(((o))): How does a Hekla track come together? What is the creative process, or does it vary from song to song?

It does vary, but usually I start with improvising for a while and I record that and then I work more on the pieces that I most like. Then I will do variations in different keys until I find the right spot. But then there are songs that just start from a nice sound that comes out of an effect and I try to build something around that.

(((o))): What sort of subjects do your songs explore or is it more of a transposing of emotion into music?

They are more of a transposing of emotion into music. The lyrics are mostly about emotions and not stories.

(((o))): You have an album ‘Á‘ coming out in September on Phantom Limb, how did the recording process for the album evolve? Is it like creating a sound collage of different recordings and combining them? Is it a balancing act between improvisation and structure?

I recorded it by myself at home. I am not looking for perfection; I do enjoy imperfection. Some recordings are even from my phone; it is exactly like a collage of my favourite sounds from a variety of times. After I improvise I will add layers and layers on top of each other and some have absolutely no structure and others have maybe a bit but not a super clear one.

(((o))): Your music sounds like abstract art, an ethereal sound sculpture or soundscape, do you think it has been influenced by Icelandic culture or terrain?

I am very visual at least, I really like having something like video art or movies or music videos in the corner of my eye while I improvise. I think Icelandic culture is definitely very open minded for the arts, but there could be more funding from the government into music institutions and more proper concerts venues.

I have performed a lot more since moving. That makes me do more variations on my songs and so everything is always constantly in motion and evolving.

(((o))): I love the idea of theremin hand motions being transposed to notation (1), it seems appropriate for your music to also have a visual expression! Could this be the start of a parallel career as a visual artist!?

I already do some graphic notations! You can see them here: https://www.heklaheklahekla.com/notation.html I was thinking to offer some merch based on them at some point.

(((o))): You recently played in Darmstadt in Germany, how did it go?

My Boss looper didn’t work so I unfortunately had to skip two songs, but now that I got home it works again. I guess Darmstadt did not want to hear those two. Other than that I think it went pretty well!

(((o))): When you play live is there a lot of improvisation or are you aiming to reproduce a song as recorded? Is it even possible for a theremin based song to be the same twice?

I really am not going to bang my head trying to do a perfect copy as it is almost impossible to do on the theremin and I would just find that so boring, also. I love that it is kind of alive.

(((o))): When you play live does the immediate environment affect what and how you play at all? For instance the differences in atmosphere and architecture?

Your mood while playing can affect your performance, the theremin is very perceptive to the tiniest movement and having a good atmosphere and architecture can definitely improve your state.

(((o))): One of your songs was included in a French film Les Garcons Sauvages (1)-how did that come about?

I did one half of the soundtrack, mostly very atmospheric songs, Pierre Desprats did the other half. I met the director while he was doing a short in Iceland and I sent him some music. It then was about 3 or 4 years until I heard back from him. I sent him some more music and he seems to have liked it. I have yet to see the movie.

(((o))): And a very important question, is there any chance of seeing you play live in Britain any time soon?

Aha! I am doing a release concert at the Servant Jazz Quarters in London the 15th of October! See you there?

Hekla also plays The Cube Microplex, Bristol on 16th Oct 18, much thanks to her for the interview.

(1)Jonsson, S.G. (2017) ‘Playing The Air: Hekla, Her Theremin and the Possibilities’ https://grapevine.is/culture/music/2017/09/06/playing-the-air-hekla-her-theremin-andthe-possibilities/