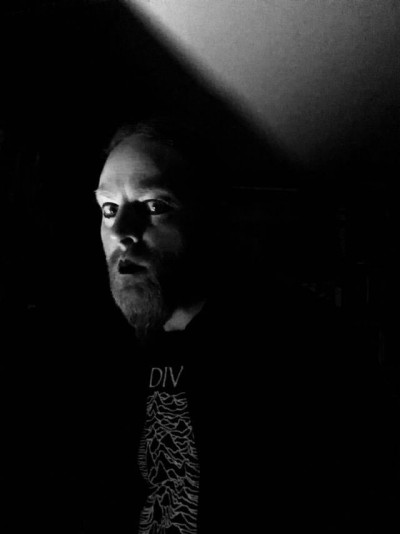 I guess the one response to 'Blackwave' that stands out the most is receiving 0% on Metal Archives.

Russel Menzies lives on the fringe of the world in Tasmania, an Australian Island in case you’ve not heard of it. For years, he has created the most haunting, harrowing black metal with Striborg.

Moving into the DSBM genre later, Striborg was part of the One Man Metal documentary by Vice, which explores the roots of his music (recommended material). Yet recently, he switched to a new sound he calls blackwave, an exploration that captures the soul of Striborg, cloaking it with new sounds.

As is always, the backlash was severe, yet I believe congratulations are in order for his musical efforts with Instrumental Trans-Communication and Blackwave. In a genre that conflictedly embraces the freedom to explore and brings up rigid confines at the same time, it’s a bold statement that captures something essential of what this music genre could be.

I contacted the artist to ask him about blackwave and he was kind enough to respond.

E&D: Which were the most ridiculous and best responses you’ve received? You’ve shared quite some online, with a note of self-mockery. Is that the easiest way to deal with this?

Striborg: I guess the one that stands out the most is receiving 0% on Metal Archives. Thankfully that has now been removed. There has been a few negative responses from people who just aren’t open-minded enough to understand what it is that I am doing nowadays. However, I have also had mostly positive and encouraging feedback for my new direction in which I truly appreciate no end too. My self-mockery is merely a reflection of my own depression and disappointment that my blackwave music hasn’t really taken off or been fully accepted.

E&D: Striborg hails from a deep, very pure and essentialist black metal past. You’ve released albums that are hailed as absolute life-changing classics by many. In order to really place your latest efforts in perspective, can you take me through your creative past on a level of perhaps creative phases, like do you see a continuation or are there definite ‘periods’ in your work?

Striborg: I think you can define Striborg into 3 eras, the black metal period, the DSBM stage and blackwave. It is a natural progression / evolution for Striborg.

E&D: Blackwave is, as you’ve voiced, an attempt to go somewhere new. At the same time a certain black metal-post-rock hybrid (blackgaze) is here to stay. It seems that this journey you took was entirely free of outside influences, as is the music. Where did the transition start? Do you feel any connection on the musical level with any others?

Striborg: Blackgaze is huge but I just can’t relate to it personally. I wanted to do something in a different direction with synths as opposed to guitars, hence… blackwave.

I had an epiphany to create this music, July 2017. You’ll need to read my interview with Invisible Oranges for further insight. A long story short, I was listening to some darkwave music and imagined what it would be like if you took it to the next level. What it would sound like if I mixed my years of BM experience with a completely different genre, boom! Blackwave. I felt this rush consume me, a revelation like I’ve never felt before. I draw influence/inspiration from darkwave artists amongst other musical styles too and a long love of 80’s synth pop.

I draw absolutely no inspiration from any black metal or black gaze bands for creating BW, this is why there is so much difference and your average metalhead is like… WTF? It must be said that the same feeling and atmosphere of Striborg is STILL present so why do people obsessively need to hear guitars?

E&D: Instrumental Trans-Communication feels like a hybrid album, a musical bridge towards Blackwave. Was it intended in that way or is it simply the formative process of this sound?

Striborg: This is where you have a much better perspective of Instrumental Trans-Communication and Blackwave over how I perceive them. Nothing was intended with the exception that ITC was just a starting point and Blackwave needed to exist to expand and define this new genre? Additionally, I felt like adding more content and detail to Blackwave using a ‘wall of sound’ production.

E&D: How much is nature still a part of your inspiration on Blackwave, or have we left the forest completely behind on this release? You’ve mentioned that the essence of the sound is to you the same, can you elaborate on that? I feel I do hear something new too, and I wonder if that how that is for you.

Striborg: I feel this new direction works well either in a rural or urban environment.

To be honest the forests have been done to death. I sing about mental illness and personal struggles more so nowadays and I have an obsession with anything luminous or dark concrete settings like multi-car parks at night and how cold and mysterious they look when lit up with UV lighting, especially when empty. Blackwave music suits forested areas too, wandering in the moonlight.

E&D: Over recent days, you’ve been putting some of your older work out on Bandcamp for people to explore anew, like Cromlech, Veil of Darkness, Baalphegor, and Mondas. Having done so much, how do you look at this work now and is there any project we may see you continue in the future?

Striborg: I’m rather fond of Krucifior / Baalphegor / Azimuth. I have great memories of the time I was in the group. There are other projects I will unleash soon. The only side project I intend to continue with is Veil of Darkness. I have purposely not been prolific with that project. I could actually record an album every week if I wanted to

E&D: What is the next step for Striborg and blackwave? You just released Spktr, which was done with the Australian Art Orchestra. Are you aiming for more projects like this in the future?

Striborg: The recording of Spktr on Bandcamp doesn’t feature the AAO. I will be collaborating with them again next year for another live performance (not recording). This is for Mona again by their request. Mona have been good to me and the AAO people are a pleasure to work with. I have briefly returned to BM for an upcoming split (I agreed to it 10 years ago).

My next blackwave album will be entitled Leave the World Behind. The title is not what you think it means, as in suicide, quite the opposite in fact. Forget your troubles and leave the world behind, overcome your struggles and carpe diem, seize the day! Start living!! Or it can mean the former too, an ambiguous title / double entendre.