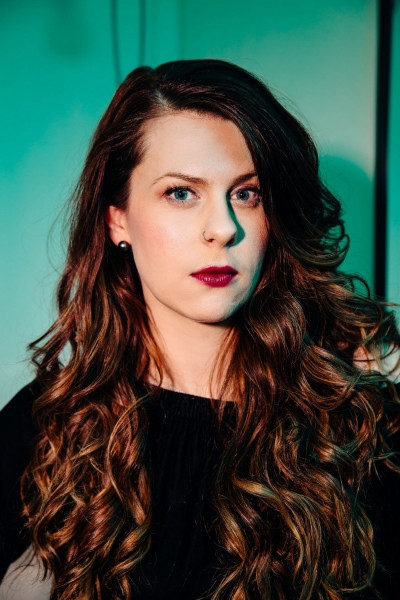 It was only through reducing my life to the very basics that I was able to get going again- creating the album was just part of the process. I am the type of person who is motivated and driven and perhaps too centered by goals, but not everyone is like that. But I do know that humans create beautiful, meaningful things from their experiences.

Brooklyn-based singer-songwriter, composer, producer, and multi-instrumentalist Victoria Langford recently released her self-titled debut album. The album is moving, emotional, empowering and healing. It was written after the end of an abusive marriage. It was ” a courageous necessity to process a painfully complex time.” She also wrote and produced the entire album, a first for the musician. Adriana caught up with Victoria to talk about this new release and more.

Victoria: Growing up, we had my grandmother’s baby grand piano in the house. I started trying to play it around age 7, trying to pluck out songs that I heard on the radio. I believe the first song I ever played by ear was Elton John‘s ‘Can You Feel the Love Tonight!’ I guess I’ve just always loved music and wanted to understand it/ communicate in that way as much as possible, so that has meant learning many instruments.

Truth be told, trombone was the first instrument I really wanted to play. When we chose instruments in the 4th grade, my mom wouldn’t let me play the trombone because “the case was too big.” My dad wanted me to play the saxophone, because it was the 90s. My mom had played the flute herself. So I picked up the clarinet. But once I came of marching band age, I certainly wasn’t going to play the clarinet on a football field, and my band director suggested the trombone. While I always wish I had better chops on trombone, people still ask me to play it and really dig it when I bring it out. I adore the trombone! It’s so fun.

E&D: What were your influences then and how have they changed since then?

Victoria: Then, as in when I was young? Well, I loved movie scores before they were cool. I definitely rocked John Williams Greatest Hits 1969-1999, the Fantasia 2000 soundtrack, and the Lord of the Rings soundtracks. There’s also some jazz influence from my jazz piano schooling- Miles Davis, John Coltrane, Bill Evans. Over time my influences have absolutely broadened to more alternative, indie, and pop influences. Radiohead, Feist, St. Vincent, Prince. The more I got into pop, I noticed that it can be incredibly creative in how it creates sounds and music never before heard. So I think ultimately I have a bedrock in classical music, but it’s certainly been shaped by modern music.

E&D: Your new self-titled album came out on April 3rd. It is your debut album and quite personal as it was written after the end of an abusive marriage. Before the album, you “had not played guitar, s[u]ng, used recording software, nor did [you] consider [your]self a songwriter.” What compelled you to start learning each of these things and see it through to the end?

Victoria: I think for a long time I had lacked a solid voice in my creative work. I was a strong helper to someone else’s creative vision but struggled to own my voice in the world of creative trends and internet popularity. Unfortunately, it took a situation this dire to catapult me into learning these new skills, but I am a big believer in redemption and conquering hardship. I also don’t like not being able to do things, ha! For starters, I was 100% convicted in this project. Having that conviction inside myself provided the drive and patience to learn these new things, and to navigate over the various hills and valleys life offers. I figured if I could handle the things I had been through, I could certainly watch some YouTube videos about making demos, play guitar every day, and book some shows. I decided not to shortchange myself anymore, or assume that I didn’t qualify. Truly- it is amazing what we can do when we have to. I truly believe that for all people.

E&D: What part of this entire process did you find the most difficult and was there anything that you found came easily?

Victoria: The production came pretty easily. It was so much fun just to try things, to finally be the one behind the wheel, able to put as much distortion on a guitar as I wanted, or write a violin solo for dramatic effect. The vocals hands down were the most difficult part. I actually wrote the vocal lines on the keys, or hummed them quietly into my phone. Each song started from a jam session where I’d find a chord progression I liked, then jam on it for a while. I didn’t have much of a singing voice, so I didn’t write for the voice I had- I wrote for the voice I wanted. Singing those parts did not happen overnight. Now that I am writing new music, it is SUCH a relief to sing for my actual voice!

Victoria: The arts are extraordinarily healing from the standpoint that they convert terrible things with terrible intentions into beautiful things within the person, and are also presented to a community. While I experienced healing from creating this record, I hope people can understand that I am not in a hurry to perform it every night on tour- it’s too intense. So I’d recommend anything that helps process the trauma to a point of completion and the ability to move on in one’s life, into freedom and newness. Music, art, dance, writing.

As far as advice for women/ people experiencing a similar situation, it can be tricky depending on where they are- still with the abuser, or separated. Being entrenched in reality and truth is paramount. Truth: no one deserves to be abused, no matter what. Truth: one has to look at literal reality- not the twisted, gaslighted reality that abusers give. Once separated, being surrounded by an A-team of loving, supporting, truth giving people is essential. I also recommend, if at all possible, taking a sabbatical and resting completely. It was only through reducing my life to the very basics that I was able to get going again- creating the album was just part of the process. I am the type of person who is motivated and driven and perhaps too centered by goals, but not everyone is like that. But I do know that humans create beautiful, meaningful things from their experiences.

E&D: There are moments of ambient experiment layering throughout the album. Can you tell us what inspired you to go that route at times?

Victoria: Oh, it just came! I was so excited about those parts. I love layered music, and adored building and tweaking the sounds into the perfect blend to communicate the soundscape, the vibe, the feeling. I often listen to music/ go to shows to enter a feeling, so I think those things just naturally occurred in my own writing.

E&D: Once COVID-19 restrictions have been lifted, are you planning on touring or is live-streaming a possibility in the meantime?

Victoria: Yes to both! I ended up having to live stream my record release onto YouTube. I’m hoping to plan some shows for later this year, and plan on live streaming on the various platforms in the meantime.

E&D: Lastly, during this time of self-isolation, what artists are you listening to? Is there a good book you are reading?

Victoria: It’s been interesting. In March when this was all developing, there was a lot of stress, so I found myself listening to soothing music- lots of Debussy. Then once everything halted, I honestly enjoyed the quiet here in Brooklyn, and the chirping birds. I have finally dug into Lana del Rey‘s new album, Norman Fucking Rockwell. Lana’s voice is so vibey, and obviously I have been influenced by Jack Antonoff‘s various projects. Then I actually started the Game of Thrones books from the beginning. No time like the present, right?!