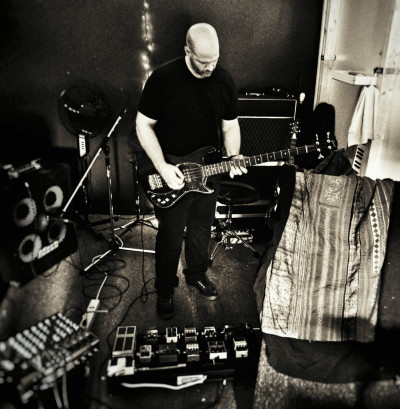 You sometimes have ideas that are all your own, that become very personal to you as a musician. And you kind of disregard what anyone else may think of it, as it's your own creation and you want it to see the light of day. That was the case with the music and ideas I started to accumulate for REPO over time.

If you are familiar with the Montreal psych/shoegaze band Room Control then you will know their bass player Richard Bunze. He recently ventured out on his own to release his first debut album titled The Lines in Between. It was released on May 29th via Velouria Recordz. His skill on guitar and bass shine through on this release, where tone meets emotion and then explodes onto a lush soundscape. I caught up with Richard to talk about the new album, the difference between playing solo vs in a band, his influences and much more.

E&D: Richard, we’ve known each other for a few years now via your band Room Control. You are a great bass player and I love your sound. Is REPO your first time venturing as a solo artist?

Richard: You’re very kind Adriana! Much appreciated! And yes, we’ve had some really awesome & memorable gigs over the last few years playing in Ottawa and Montreal with your awesome band Forgotten in the Woods Again. Good times…Room Control loves Ottawa!

In regards to REPO, it’s a side project of mine and you are correct, this is my first time going at it alone as a solo artist. It’s certainly a different feeling but exciting all the same.

E&D: In REPO, you not only play bass but you also play guitar and synth. When did you start learning these instruments and do you favour one more over the other?

Richard: Right…The Lines In Between is mainly bass and electric guitar, both run through my pedalboard. A lot of textures, layers and effects. There are also two tracks that have a very minimal single note, synth drone in the background…so, I don’t really consider myself a synth player but I can play those two notes really well! 😉

I started playing guitar when I was 15 years old and loved it from the start. I started right off the bat on electric, so it was very expressive and I was amazed by every new discovery at that age. I took some lessons at the beginning but then just started learning songs by ear and practicing for hours and hours in my parents’ basement. My first guitar was a red Squier Strat by Fender, which I still have actually, it’s out on a guitar stand at home and I still reach for it to practice new ideas.

Playing bass for me only started in 2014. Previously, I had stopped playing music altogether for many years due to certain relationships and work situations at the time. It was kinda sad looking back, I really missed it. But thankfully bass got me playing music again, more specifically my buddy and current Room Control bandmate Byron, who’s then older band, I joined on bass. I suppose being a guitarist first, I’ve always approached my bass playing more like a guitar. I use a pick 95% of the time, play more of a wide textural style, with a lot of volume and a bunch of effects. I’ve really been loving playing bass the last several years, as I find I’m able to get right down to the melodic root of what I want to play. And I’ve always loved a big thick groove. At the end of the day, I’m a tone junkie. Whether it be bass or guitar, I’m always going after some kind of tone & texture that gets me going.

E&D: Who would you say has or have been great influences on you and your music?

Richard: Oh man…There are so many but certain musical moments or bands impact you more than others and I’ve found that those stick to you & with you and become what I like to call my “Sonic Blueprint” as a guitarist, bassist, musician. I remember when I was 12 years old and I heard the intro to ‘Where the Streets Have No Name’ by U2 for the first time. That majestic swell of the organ and the Edge’s melodic, chiming guitar part…I was hooked! It gave me chills and brought the goosebumps. I didn’t know the guitar could sound like that. It made me feel like I wanted to be a part of that sound somehow. It felt like home to me and I immediately identified with that wide, ethereal, cinematic type sound, and to this day, it’s a sound I will always gravitate towards. So, coming from that side of things, The Edge was a huge influence on me, not only wanting to play guitar but to create soundscapes and use effects. Then I discovered the progressive space rock sounds of Pink Floyd, with David Gilmour’s tasteful & searing playing, taking guitar into the stratosphere (no pun intended). Then I became obsessed with the dark melancholy, and melodic electro-synth sounds of Depeche Mode…They’re another band that really knows how to create atmospheres that just take you somewhere else. Music for The Masses and Violator are massive albums for me. I’m still a huge DM fan.

Another big album for me would have been Siamese Dream by Smashing Pumpkins…a guitar masterpiece. This led me to another major moment of enlightenment for me as a musician…hearing Shoegaze via Slowdive’s Souvlaki for the first time…the track ‘When the Sun Hits’ blew my mind and hit all the right buttons for me. The same can be said for Swervedriver and their album Mezcal Head and pretty much anything they release. Both these bands make me want to play guitar and make music. Very inspiring.

Richard: I love playing and creating in a band for sure. Room Control is great that way. The feeling of getting in our jam space, banging it out and discovering some epic vibe that all three of us hit on, is an awesome feeling. When a new idea for a song emerges and you feed off each other’s sonic energy and what everyone is putting out there…the sound just takes over and that type of creative process is very exhilarating to me!

However, on the flip side, you sometimes have ideas that are all your own and that become very personal to you as a musician. And you kind of disregard what anyone else may think of it, as it’s your own creation and you want it to see the light of day. That was the case with the music and ideas I started to accumulate for REPO over time. I guess you could say it’s freeing in a way. I was left to my own devices and I just played what I wanted to hear. Generally with me, when that’s the case, it usually ends up having a kind of majestic, melancholy, wide & ethereal vibe about it sonically….with lots of reverb & delay of course! HaHa! REPO has been very rewarding to me personally as a musician and a great learning experience. To know that I could do it and put it out there…I definitely plan to do it again.

E&D: On May 29th you released The Lines In Between via Velouria Recordz. Can you tell us a bit about the album and how it came to be?

Richard: It all stemmed out of certain ideas or riffs I had at the time, things that I thought maybe wouldn’t quite fit with Room Control… But, still ideas I really liked. The baseline for ‘Sleepless’ was the initial catalyst I guess. It came to me while sitting on my couch at 3 am while going through a bout of insomnia…and I just started playing bass acoustically and that sleepy, mellow bassline came out, so I recorded it on my phone to not lose the vibe & idea. Those initial phone recordings of acoustic bassline ideas also happened at different times for other tracks like ‘Polar Ghosts’, ‘Lull’, and ‘Canyon’. Pretty much the root of the tracks are all derived from basslines as the skeleton for the songs. All the guitar textures and atmospheres were all created and improvised during the recording process…which are some of my favorite things to create sonically. I can get really lost and almost drift away in those moments in the studio.

Then I got together with a good friend & talented musician, Tom Jarvis (Pachyderm / Hey Majesty / Voyeur), who was interested in recording & mixing the project. Tom is great to work with. It was a very encouraging and inspired atmosphere and he really just gave me space to do my own thing sonically. REPO came to life over a few weekend recording sessions in 2017 at our rehearsal space in Montreal, and then was mixed & mastered in 2018. The mastering was done by another friend and artist, Shane Watt, at MTL’s Marsonic studios. The release of it was kinda put on hold, as I was busy with the other bands I’m involved with. But I’m happy to say that it’s finally out!

E&D: Once C-19 restrictions are lifted, are you planning on touring in support of the album? In the meantime, might fans expect a live-stream show?

Richard: I definitely would like to perform the songs live at some point yes but in a live environment on stage. I don’t foresee any live streams coming any time soon but ya never know. The main plan is to assemble a band first to be able to bring the different bass & guitar layers/textures to life on stage.

E&D: I think I can guess what this might be but what is your most favourite effect pedal to work with?

Richard: LOL…I think you’ve known me long enough now to know that I’m a big reverb and delay kinda player. I love very wide & ethereal sounds. I have quite a few pedals on my board but I suppose one pedal I can’t live without, for both guitar and bass, is my EHX Holy Grail Max…simple, lush, very effective reverbs. I love it.

E&D: Lastly, is there a good book or album you’ve been reading or listening to lately?

Richard: As for books…I’m currently finishing off the Alan McGee book called “Creation Stories: Riots, Raves and Running a Label”. Wild stories of how he started out and created the legendary indie label Creation Records. Discovering and signing bands like The Jesus & Mary Chain, Slowdive, Swervedriver, Primal Scream, and I guess most famously…Oasis. Not a kids book! LOL.

For records…This Covid containment has led me to order quite a few vinyl albums online via two really great record shops: “Aux 33 Tours” here in Montreal, and “Sonic Boom” in Toronto. Thanks for the music guys! The vinyl spinning at home include The Verve – A Storm in Heaven, Massive Attack – Mezzanine, Actors – It Will Come To You, Charles Bradley – Changes, Budos Band – V and Burnt Offering, Hammock – Silencia and Raising your Voice…Trying to Stop an Echo. Also been non-vinyl listening to David Bowie – Low and a great shoegaze band out of Montreal called Murmure – Espace-temps and Nos idées fantomes. Check them out!